Hurricane Hermine is slated to cause serious coastal damage along the mid-Atlantic Coast and possibly New England, yet when the record books shut, it won’t be considered a “major” storm.

By definition, a major hurricane hasn’t hit the continental U.S. since 2005.

That’s despite causing at least one death and severe flooding in Florida on Friday, where the storm became the first hurricane to make landfall in the state since 2005.

Cedar Key, a 700-person village 90 miles north of Tampa Bay, was “devastated” by rain, wind and a 9-foot storm surge, the town’s police chief said. More the 250,000 people lost power, according to the New York Times, as the storm crossed Florida’s Big Bend.

Experts say the worst impacts are yet to come.

“Hermine is going to have a very huge impact from Georgia and the Carolinas all the way up into the mid-Atlantic coast, and perhaps into southern New England,” Accuweather chief meteorologist Bernie Rayno told NewsHour.

The battering of these coastal communities may continue well into next week, as the storm stalls just offshore. Rayno and other experts say the rainfall and winds may intensify as the storm churns in the ocean, causing the damage to push into inland communities along the Chesapeake Bay and Delaware.

“You have to remember this past winter, Delaware and Maryland got hit hard with a nor’easters,” Climate Central meteorologist Bernadette Woods Placky said. These beaches aren’t at their strongest state so, this storm could be really damaging to them.

So why isn’t Hermine a “major” storm? Let’s count the ways.

Hurricane severity in the Atlantic Ocean is classified by the Saffir–Simpson scale, which pays attention to a single factor: wind speed. Created nearly 40 years ago by civil engineer Herbert Saffir and National Hurricane Center director Robert Simpson, the scale relies on wind speed because it’s one of the most damaging aspects of a hurricane when it comes to physical structures. Only Category 3 storms (with winds of 111 to 129 miles per hour) or higher earn the label of major hurricane.

By definition, a major hurricane hasn’t hit the continental U.S. since 2005. 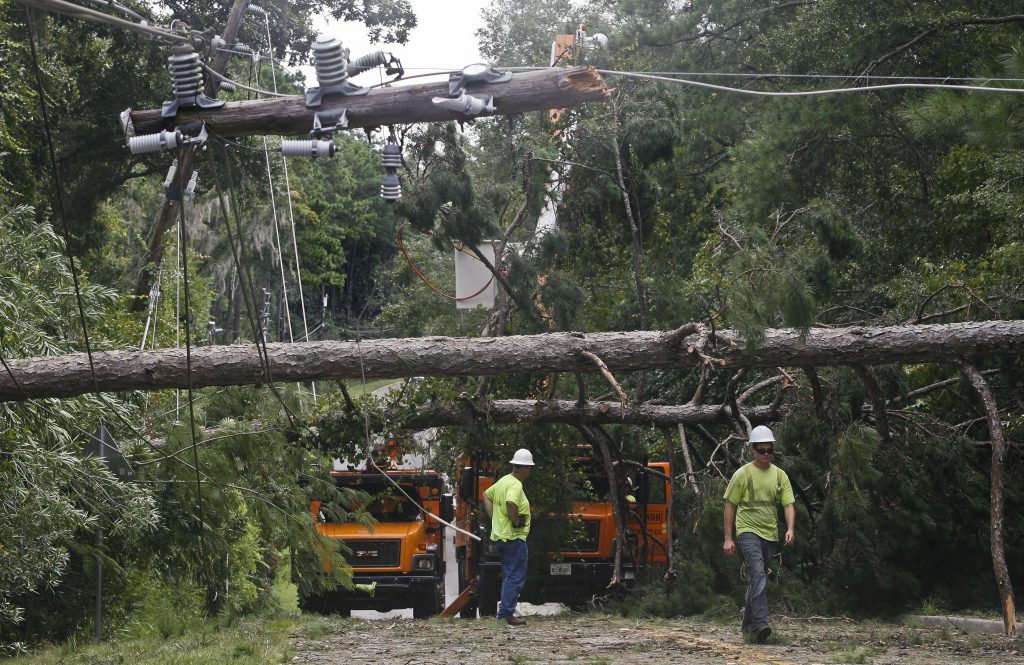 “A lot of history regarding the construction in hurricane-prone areas and what they could withstand in terms of wind went into the scale’s development,” Woods Placky said. But it doesn’t account for storm surge — when winds push seawater onshore. Storm surge caused most of the damage during Hurricane Sandy in 2012. The National Weather Service took notice afterward, according to Woods Placky, due to the damage and confusion wrought by the storm surge.

“Afterward, the National Weather Service did a lot internal and external assessments, and from that, they’ve spun up their storm surge forecasting,” Woods Placky said. One model called SLOSH has been updated to show real-time information. It can really show where water is going to pile up, Woods Placky said. Here is a prototype storm surge tracker for Hurricane Hermine.

Hermine should head back over water this weekend, where Rayno said it may stall, akin to what happened with the devastating storms over Louisiana last month.

Rainfall is another understated factor of tropical storms, which may come into play this weekend with Hermine. Hermine should head back over water this weekend, where Rayno said it may stall, akin to what happened with the devastating storms over Louisiana last month.

“That wasn’t a tropical system, but it stalled,” Rayno said. “When you have a stalling system, the moisture can produce a hell of a lot of rain in a short period of time.”

Current weather models predict a strong easterly wind this weekend, so as heavy rains fill the mid-Atlantic states, strong air currents may push the surf against the coastline. The Saffir–Simpson scale doesn’t account for this factor — nor the speed, direction and physical size of a storm. All of which can dictate a storm surge. That’s where the scale falls short in terms of communicating the threat to the public.

“If [Hermine] sits there and throws wind and rain back into those areas for a couple of days, that’s going to be pretty damaging,” Woods Placky said. She recommends people in coastal and adjacent communities pay attention to local meteorologists and emergency management. They’ll have the best handle on rainfall and storm surge levels for specific areas, as well as how to prepare accordingly, she said.

America’s hurricane drought isn’t an anomaly, and that’s because weather and climate work in cycles. This rationale is especially true for hurricanes in the Atlantic Ocean.

“You have spurts of activity and spurts where it’s tranquil,” Rayno said as he described the Atlantic Multidecadal Oscillation (AMO). That is a warming and cooling of the Atlantic, which happens naturally every few decades. Higher temperatures mean more hurricanes, at least twice as many during the warm phase of an AMO. 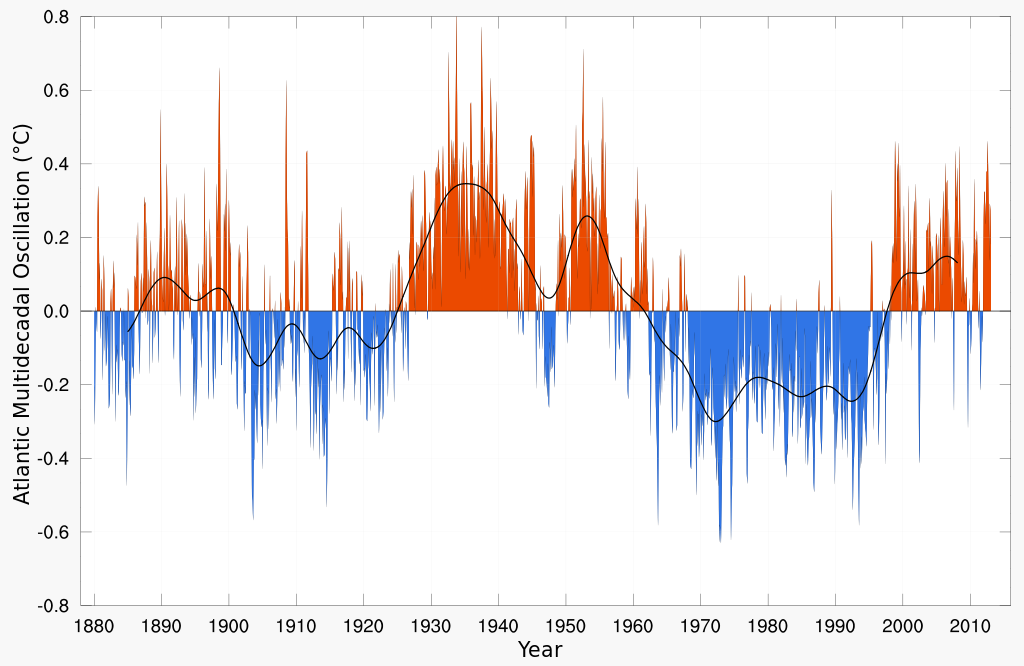 The latest AMO started in 1995 and contributed to the number of tropical storms that matured into severe hurricanes over the last two decades, according to NOAA. The U.S. was hit by four major hurricanes — Dennis, Katrina, Rita and Wilma — in 2005 alone. Yet, in recent years, Atlantic temperatures have started sliding downward, which means fewer hurricanes.

But AMO should shoulder the blame for the hurricane drought with a major climate pattern located halfway across the world. You may know it as the El Niño–Southern Oscillation (ENSO), which warms ocean water and air over the Pacific Ocean. One side-effect of El Niño is greater wind shear in the Atlantic, which cuts developing tropical storms to ribbons. Multiple El Niños have hit since 2005, including a strong one last year.

“Certainly, the El Niño that was quite strong this year has faded away, and that has increased the probability of more storms in the United States,” Rayno said. The prediction for this hurricane season is more activity and above normal storms in the Atlantic Basin, he said.

But that’s not the whole story.

“El Niño explains the last couple of years,” Woods Placky said, “but not the last 10 to 11 years.”

So what’s the primary reason for the hurricane drought? Luck. Woods Placky said even with ENSO, AMO and other climate patterns, big storms still hit the Atlantic. But, they missed the U.S.

“We’ve had these storms out there. Some have been directed to Mexico, others hit the Caribbean islands,” she said. “There’s not a smoking gun for why they’ve been blocked [from the U.S.]”

Whenever there’s an increase in hurricanes, which may occur in the near future, people tend to blame anthropogenic (human-made) global warming and its influence on climate patterns. When I asked Rayno if this line of reasoning is valid, he responded: 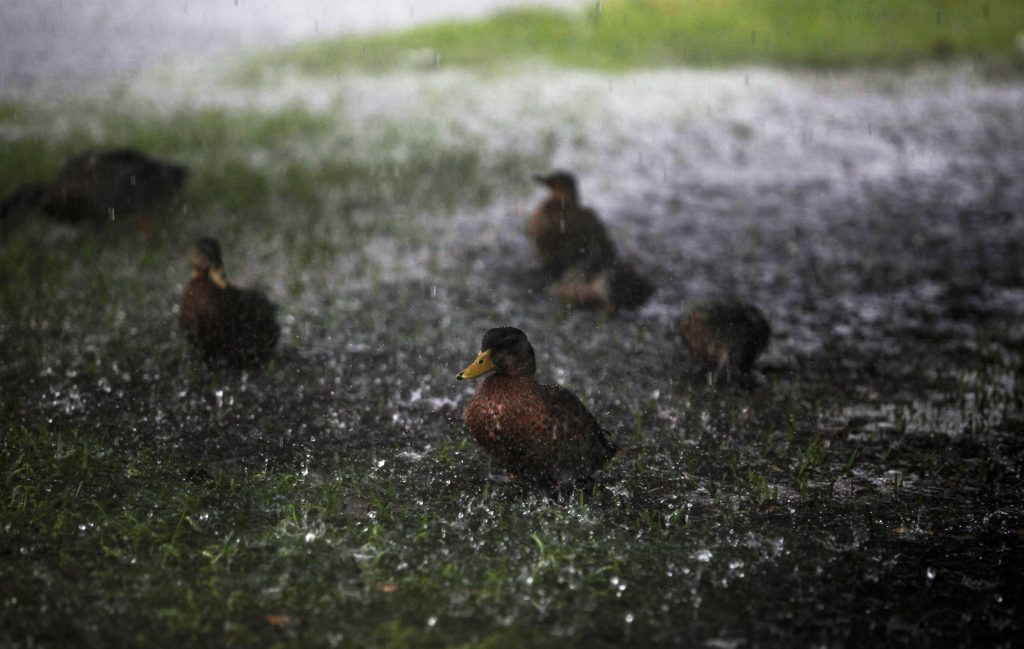 Ducks are splashed by the heavy rains of Tropical Storm Hermine as it passed through Surfside Beach, South Carolina, U.S. September 2, 2016. Photo by Randall Hill/REUTERS

This challenge seems counterintuitive, given it’s accepted that warming temperatures worsen storms by increasing rainfall. However, the jury remains out on whether or not anthropogenic warming will increase the frequency of hurricanes or the intensity of their winds across the globe.

The question remains open because reliable data on the lifecycles of hurricanes date back only a few decades. Scientists started tracking hurricanes with satellites in mid-1970s.

“There was a lot happening off shore that people didn’t know about,” Woods Placky said. “Ships could give some idea, but it wasn’t extensive.”

As a result, there are still a lot of open questions with hurricanes and climate change, which is especially true for long-term trends. Natural variability in weather patterns and climate events like El Nino and La Nina makes predictions even harder.

However, the Intergovernmental Panel on Climate Change did state in their last assessment that enough data are available to conclude there has been an increase the number and intensity of North Atlantic hurricanes since the 1970s. It’s merely unclear if this trend will continue.

“Globally, oceans are 8 inches higher than they were in 1900. That 8 inches is pushing storm surges that much higher and farther inland,” Woods Placky said. “Those are two things that we’re confident about — more rain and higher impactful storm surge.”