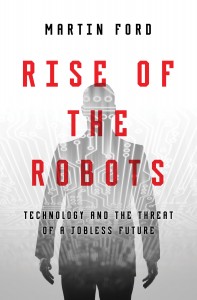 Over the past 20 years, we’ve seen plenty of blue collar jobs outsourced to machines — from auto assembly to customer service. Now, as computers, equipped with artificial intelligence, increasingly take over “information jobs,” tasks that were once reserved for skilled, college-educated white collar professionals are vulnerable. That’s the argument made by Silicon Valley entrepreneur Martin Ford in a new book, “Rise of the Robots: Technology and the Threat of a Jobless Future.”

He spoke with us for a story that aired on Wednesday on the PBS NewsHour about the economic impact of artificial intelligence. It’s part of a series about the rapid advance of AI and how it’s affecting society.

We asked Ford to give us three examples of white collar jobs that are ripe for automation. Pharmacists, attorneys and one close to our hearts — journalists. All three of these professions have already been transformed in profound ways most of us may not even realize. 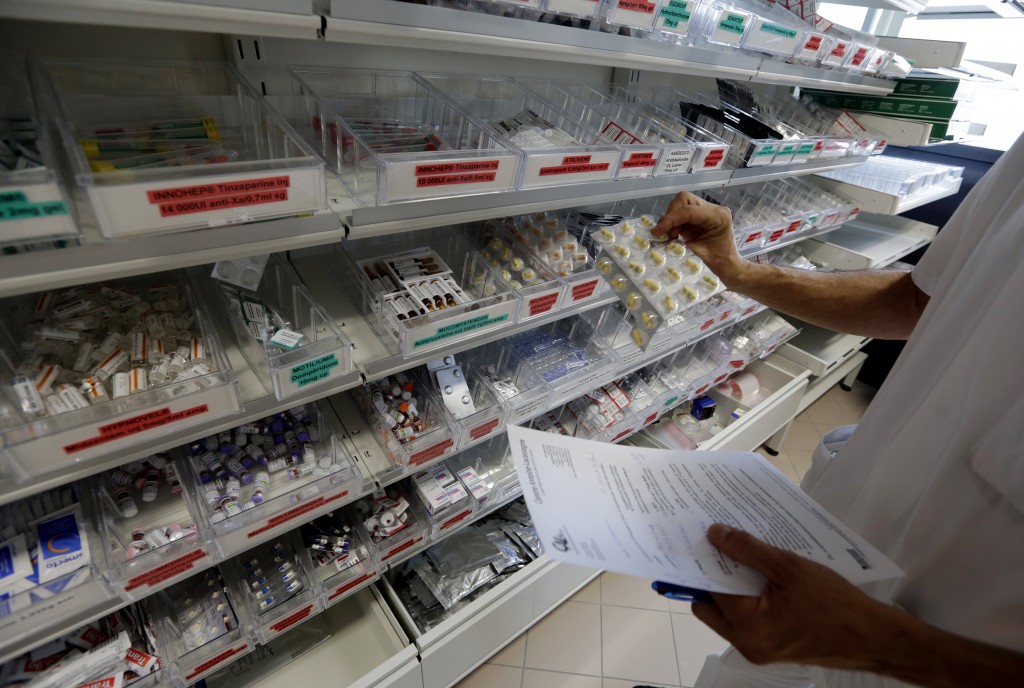 “There is already a big impact on pharmacies. You have massive machines in hospitals that automate the whole process internally — and you’ve also got smaller machines about the size of a vending machine that are being deployed in pharmacies, so it’s already having a big impact,” Ford says.

In a promotional video, Mary Anne Koda-Kimble, dean of the UCSF School of Pharmacy, explains how the technology allows her staff to focus more of their expertise on direct patient care: “Automated medication dispensing frees pharmacists from the mechanical aspects of the practice.”

But Ford says that will change. “Right now, it may be true that a lot of pharmacists still have their jobs because we have laws and regulations that require them to be there. It takes a great deal of training and education to be a pharmacist, but what they do is fundamentally routine and it’s really geared toward producing a very consistent reliable result and that’s the kind of work that’s ideally suited to automation.”

UCSF says another major goal of an automated pharmacy is patient safety — pointing to “studies that have shown that technology can help reduce errors.”

You might remember Bob Wachter from part 2 of our series on AI. He is associate chair of UCSF’s medical school and author of “The Digital Doctor.” He warns of fatal implications that can result from an over-reliance on computers, citing the example of Pablo Garcia, a teenage patient at UCSF who survived after he was given 39 times the amount of antibiotics he should have received.

“In two different cases, the computers threw up alerts on the computer screen that said, ‘this is an overdose.’ But the alert for a 39-fold overdose and the alert for a 1 percent overdose looked exactly the same. And the doctors clicked out of it. The pharmacists clicked out of it. Why? Because they get thousands of alerts a day, and they have learned to just pay no attention to the alerts.”

So, was the error the fault of the humans or the machines — or is it a combination of the two?

Wachter says that when “people are relegated to being monitors of a computer system that’s right most of the time, the problem is, periodically, the computer system will be wrong. And the question is, are the people still engaged or are they now asleep at the switch because the computers are so good?” 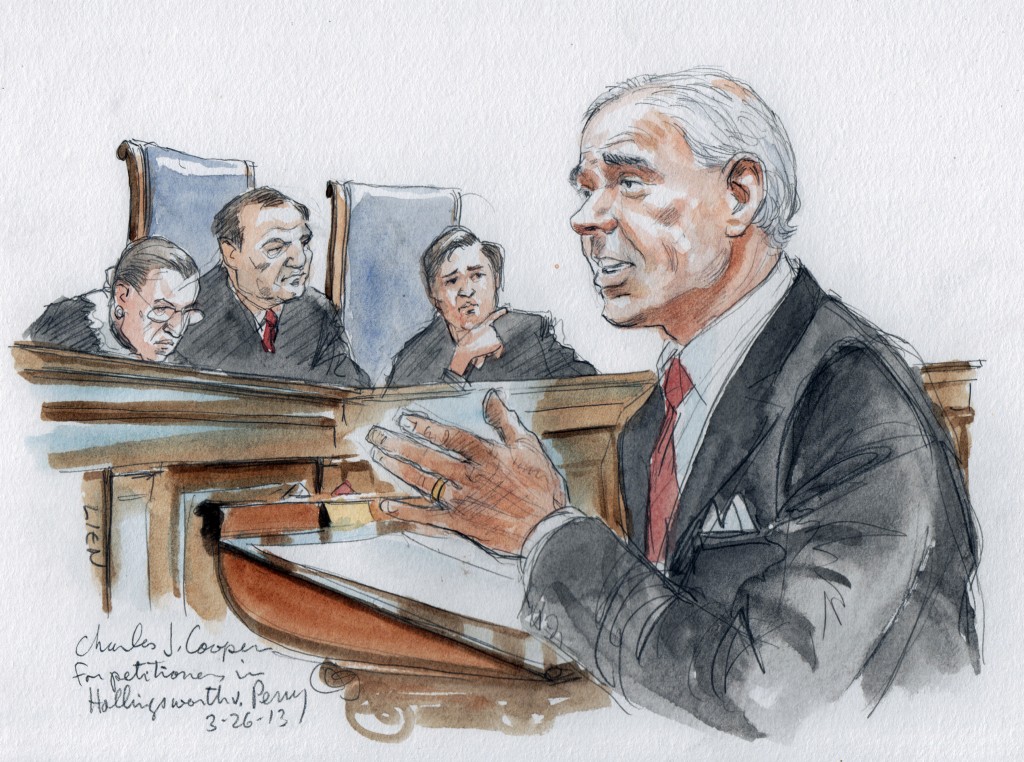 It’s unlikely the Justices would respond to a robot. Here, attorney Charles Cooper argues before the Supreme Court in this 2013 drawing. Photo by Art Lien/Reuters

“We are already seeing an impact in fields like law, with entry level and paralegal jobs which involve document review. It used to be a manual process. They had to read through documents. Now that’s done algorithmically using artificial intelligence.”

Though it’s unlikely we’ll see robots litigating in courtrooms any time soon, Ford says that some highly billable work normally reserved for seasoned attorneys is in the process of being automated.

“There’s a new emerging technology called quantitative legal prediction. It turns out that experienced lawyers often add a lot of value by making predictions. They’ll do things like tell you what is the likelihood you’re going to win a case, or that the case will be overturned on appeal, for example. It generally takes a lot of judgement and experience to make those kinds of predictions, but these algorithms can actually out-perform even the most experienced lawyers by just looking at lots and lots of data.” 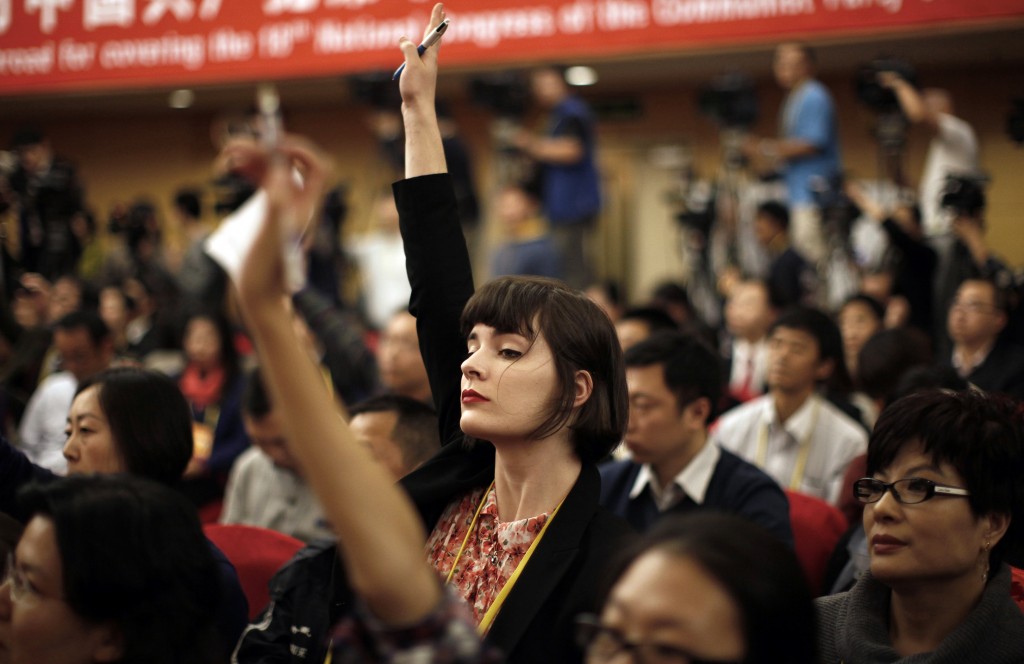 But would a robot ask the tough questions? Photo by Carlos Barria/Reuters

We journalists are not immune from displacement by automation either. Using computer algorithms, companies like Narrative Science and Automated Insights are already generating journalistic stories for clients like Forbes, covering topics that include business, sports and politics.

In his book, Ford writes, “The company’s software generates a news story approximately every 30 seconds, and many of these are published on widely known websites that prefer not to acknowledge their use of the service.”

He explained to us, “Essentially what they do is they tap into some sort of data stream and they are able to analyze that data and tease out what’s most interesting and create a compelling narrative based on that and actually write a story. They’re getting more and more sophisticated; it’s not something that’s just purely formulaic where you just plug numbers into a set template; it’s already gone beyond that and it’s getting better and better.”

It’s unlikely machines will ever be able to replace the type of analysis we get from Mark Shields and David Brooks, but it might be possible that our news summary could one day be an automatically collated compendium of geo-located video shot by viewers like you.

How to learn to stop worrying and embrace the robot

If all of this seems a little frightening, you might take heart listening to Ray Kurzweil. He’s director of engineering at Google, and inventor of technologies like the flatbed scanner. He says we shouldn’t feel threatened by AI.

“You can point to jobs that are going to go away from automation, but don’t worry, we’re going to invent new jobs. People say, ‘What new jobs?’ I don’t know. They haven’t been invented yet. Sixty-five percent of Americans today work at information jobs that didn’t exist 25 years ago, two-thirds of the population in 1900 worked either on farms or on factories. Today that’s 2 percent and 2 percent. If I had said a century ago, ‘Well, don’t worry you can get jobs developing websites and apps and doing information jobs of various kind,’ people wouldn’t know what I was talking about. We’re constantly inventing new things to do with our time, but you can’t really define that because the future hasn’t been invented yet.”

Kurzweil, who was awarded a technical Grammy this year for his invention of the first computer-based instrument that could realistically re-create the musical response of a grand piano, says humans have other unique advantages over machines.

“At the very highest level, we have things like language and art and creativity, being funny, being able to create new types of knowledge, music. No other animal actually creates music or humor. That’s what we value about human beings.”

By combining human and machine intelligence, we will reach new heights. “I think we have the opportunity to actually be more emotional in the better sense of the word by enhancing our intelligence, and we already have AIs that can relieve us of doing tedious kinds of thinking and can focus more on creativity. We’ll be funnier. We’ll be better at expressing loving sentiments. I think it will enhance the better values of humanity.”

So, we might be out of work, but at least we’ll have a good sense of humor about it.

Watch all the videos in our series, “Thinking Machines,” in the playlist below:

Left: Automation has long been a part of the service industry, but how much will robots contribute the white collar world? Photo by Reuters