300 million years ago, our ancestors walked tall. This robot shows you how

The great, fictional detective Sherlock Holmes could read footprints — in soil, snow, carpet, dust and even blood. Scrutinizing the tracks left behind, he postulated the height, weight and behavior of someone who was no longer there, reaching back in time to solve the mystery.

Researchers today are similarly using tracks caught in stone to recreate a creature that lived 300 million years ago. In a new study published Jan. 16 in Nature, John Nyakatura and his co-authors use technology more powerful than Holmes’ magnifying glass to learn how our distant ancestors performed one the most basic activities passed down to us.

The team built a physical robot, modeled off living reptiles and amphibians, to examine how animals that predated the dinosaurs evolved to walk on dry land.

Researchers simulated an ancient animal’s walking pattern. The top animation is a digital simulation of Orobates pabsti, and the bottom video is a physical robot made of 3D-printed parts and 28 separate motors. Both demonstrate how this style of walking matches the fossil up with the fossil tracks. Image courtesy of Tomislav Horvat and Kamilo Melo

New evidence created by the model shows that the common ancestor shared by all four-legged animals (including humans) may not have been dragging across the ground like a salamander. Rather, these ancient creatures were already well-equipped to cruise across continents like caimans and crocodiles.

“It’s amazing to see a fossil come to life in that way,” said Julia Molnar, a comparative anatomist from the New York Institute of Technology who studies vertebrate locomotion and who was not involved in this study.

Most of the species that ever existed on Earth likely lived and died without leaving a trace, so the discovery of a beautifully preserved Orobates pabsti fossil, described in 2004, was already astonishing. Though it was not a direct ancestor to any living species, Orobates appeared to be a sturdy, vegetarian, land-walking creature — and close cousin to the animals that bred every reptile, bird and mammal that live today.

In 2007, another stunning discovery linked the skeleton of this ancient four-footed walker with a series of fossilized tracks belonging to the same species.

This was the oldest combination of tracks and land-living track-makers ever uncovered, said John Nyakatura, an evolutionary biologist from Humboldt University of Berlin. “This is really cool, and was the starting point for our project.”

To put together a more complete picture of how the early amphibian- and reptile-relative Orobates might have moved and behaved, Nyakatura and his colleagues started with the walking patterns, or gaits, of more familiar species.

They X-rayed modern-day salamanders, skinks, iguanas and caimans walking on a treadmill, carefully measuring the animals’ sprawled-out limbs and watching the movement of their bones. 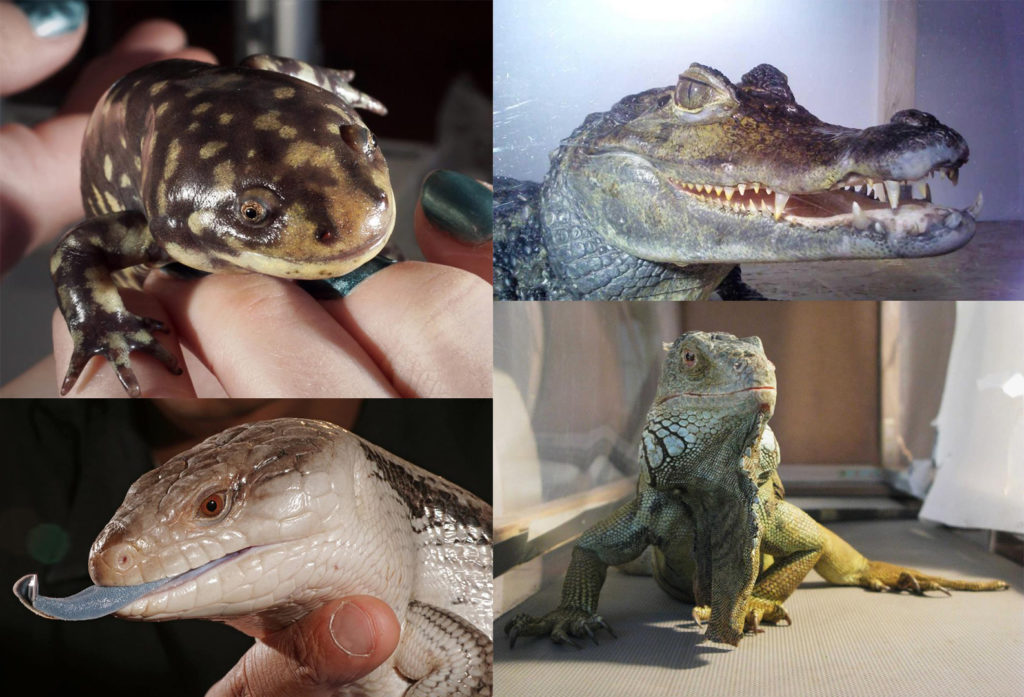 Researchers used these modern animals to make models and investigate how an ancient ancestor might have walked. Clockwise from upper left: a Mexican salamander, a caiman, a green iguana and a blue-tongued skink. Images courtesy of Jan-Peter Kasper (salamander and skink), John Nyakatura and Stefan Curth

A blue-tongued skink X-rayed while walking. This animal and others helped shed light on how ancient ancestors of all four-legged animals moved. Image courtesy of John Nyakatura, Vivian Allen, Emanuel Andrada and Martin Fischer

Next, they created a series of computer models of the Orobates skeleton.

These digital simulations of Orobates allowed the team to test a variety of gaits. While some ways of walking might be anatomically impossible, Nyakatura said, some might just be exhausting and impractical. Some gaits might make the animal less stable, but allow it to move faster on certain terrain or match the fossilized tracks more exactly.

Because the researchers had to decide which of those characteristics were most important, they’ve released their whole data set (with other options) online for anyone who wants to weigh them differently, Nyakatura said. For those who want to try out their own interpretation of Orobates’ locomotion, the team’s interactive simulations are available online to play with.

But a digital model can only show so much. To test their simulation against real-life physics, the team built OroBOT.

“Animals have many more muscles than we could dream of showing in a robot like this,” said Kamilo Melo, a roboticist from the Swiss Federal Institute of Technology Lausanne who also worked on the new study. “But this robot could bend its spine, lift the body off the ground and show how much rotation there is in different joints.”

Built from computer-designed 3D-printed parts connected by 28 motors, the robot measured more than 4 feet in length, a slightly scaled-up version of the original 3-foot fossil.

Given the parameters revealed by their computer models, OroBOT could articulate each of the possible walking styles, while allowing the team to measure the real-world energy cost, balance and similarity to modern animals. They could also check the robot’s ability to recreate the fossil’s own tracks.

Previous conceptions of the age of Orobates — the Permian era — assumed that only our immediate tetrapod ancestors evolved a more upright, active and efficient walking style. This paper revises that assumption — suggesting that these earlier walkers had their bellies off the ground.

Orobates lived in a time when all of Earth’s land was a single, great continent, known as Pangaea. Picture a world without flowers and grass, wrought by harsh climates.

“Animals that lived in the Permian were not necessarily restricted to salamander types of locomotion,” Molnar said.

Orobates lived in a time when all of Earth’s land was a single, great continent, known as Pangaea. Picture a world without flowers and grass, wrought by harsh climates. Adaptations from this period allowed vertebrates to become accustomed to — and thrive — on dry land.

“It’s an important time period,” Molnar said, before a massive extinction took out almost all marine invertebrates but left the ancestors of dinosaurs and mammals to radiate across the world.

Molnar added that “there are a relatively small number of fossils that are equally related to humans, birds, dinosaurs and lizards.” The Orobates fossil may have been more likely to survive because the species burrowed into the ground. Collapsed burrows would be more likely to preserve an animal from predators and allow it to slowly petrify.

“Whatever you can learn about [Orobates] is going to affect how you can understand all these different animals,” Molnar said.

Beyond that, she said, “the methodology is something really new and exciting. They’re pushing forward with really rigorous evidence-based reconstruction of extinct animals.”

With these techniques, she added, “maybe we can learn more about how dinosaurs really moved, or even our ancestors, for that matter.”

Left: OroBOT, a robotic model made of 3D-printed parts and 28 individual motors, can demonstrate how ancient creatures called Orobates might have walked 300 million years ago. Image courtesy of Tomislav Horvat and Kamilo Melo