7 DIY experiments you and rapper B.o.B can do to prove Earth is round

“The Earth is round.” Teachers say it. Scientists say it. But how do they know?

I ask because an Internet conversation has surfaced among celebrities like former television personality Tila Tequila whereby they state the Earth is flat. On Monday, musician B.o.B took up the mantle on Twitter, spurring a spicy conversation with noted astrophysicist Neil DeGrasse Tyson. Tweets were exchanged on both sides, and eventually, rap songs too.

Dear @bobatl, as an astrophysicist I don’t rap, but I know people who do. This one has my back: https://t.co/BbMi4tzHLz

Miss Tequila and B.o.B aren’t alone. Flat Earth thinking dates back thousands of years, when early societies like the Sumerians, Babylonians and Ancient Egyptians believed that the planet resembled a pancake. Christopher Columbus is often miscredited for correcting this idea and discovering the Earth’s curves by not sailing off its edge, but in fact, it was Ancient Greeks, such as Aristotle and Pythagoras, around 2,400 – 2,600 years ago, who first proposed that the Earth was round.

But you’re not here for a history lesson. You’re here for experiments!

Any mere mortal can validate our planet’s shape with basic household items like lamps, rulers and soccer balls. So without further ado, here are seven ways that B.o.B, Miss Tequila or any round-Earth denier can convince themselves that the Earth is indeed round.

Every now and again, the Earth passes between the moon and the sun, completely blocking its light and casting a shadow across the moon called a lunar eclipse. If you look closely while this happens, you would notice that the Earth’s shadow forms an arc as it creeps across our view of the moon.

A combination photo shows the moon during a total lunar eclipse as seen from Mexico City, April 15, 2014. Photo by REUTERS/Edgard Garrido

You might respond, “You’ve shown the Earth is round, but couldn’t it be round, but still flat — a flat disc?” Well, your eyes and telescope would also spot the 3D spherical nature of the moon. The Flat Earth Society does admit that the moon, the sun and other planets are indeed spherical, but claim that the “Earth is not a planet,” and unlike other celestial bodies, is flat.

So let’s ignore the moon for now and examine the other member of the eclipse trifecta: the sun.

Experiment 2: Take a trip to San Francisco and Seattle
Things you’ll need: A flight ticket, a long straight stick and a tape measure.

As theoretical physicist Ethan Siegel explains in great detail, you, me and B.o.B have something in common: we can use the sun to witness the curvature of the Earth. Here is Siegel:

On a midsummer’s day more than two millennia ago, Ancient Greek astronomer Eratosthenes of Cyrene noticed this too.

While a scholar at the library of Alexandria, Eratosthenes heard of a deep well in the southward city of Syene (now Aswan, Egypt). Once a year on the summer solstice, the citizens of Syene noticed that sunlight reflected off the well’s bottom. They also saw that sticks and tall buildings cast no shadows, suggesting the sun was directly overhead. But in Alexandria, on the same day, Eratosthenes found that sticks did cast a shadow. By measuring the angles of those shadows and by hiring surveyors to measure the distance between Syene and Alexandria, he not only was able to calculate the curvature between the two cities but also the circumference of the entire Earth.

Luckily, B.o.B doesn’t need to travel to Egypt to replicate this test, he need only visit our West Coast.

How did Eratosthenes calculate the circumference of the Earth? Video by Math Centre

One of the keys to Eratosthenes discovery came from Syene being due south of Alexandria. Stated otherwise, they lie on the same meridian.

Luckily, the same applies to San Francisco and Seattle. If B.o.B were to ever perform in the two cities on back-to-back days, he could replicate the work of Eratosthenes himself. If he heads to a park on both days, he could jab a meter stick in the ground, measure the angle that the shadow makes with the ground at high noon and reproduce Eratosthenes’ calculation.

This experiment would work in any two cities on the same meridian, provided they’re 200 miles away from each other.

Experiment 3. Watch the sunset lying down
Things you’ll need: The ground and the horizon. 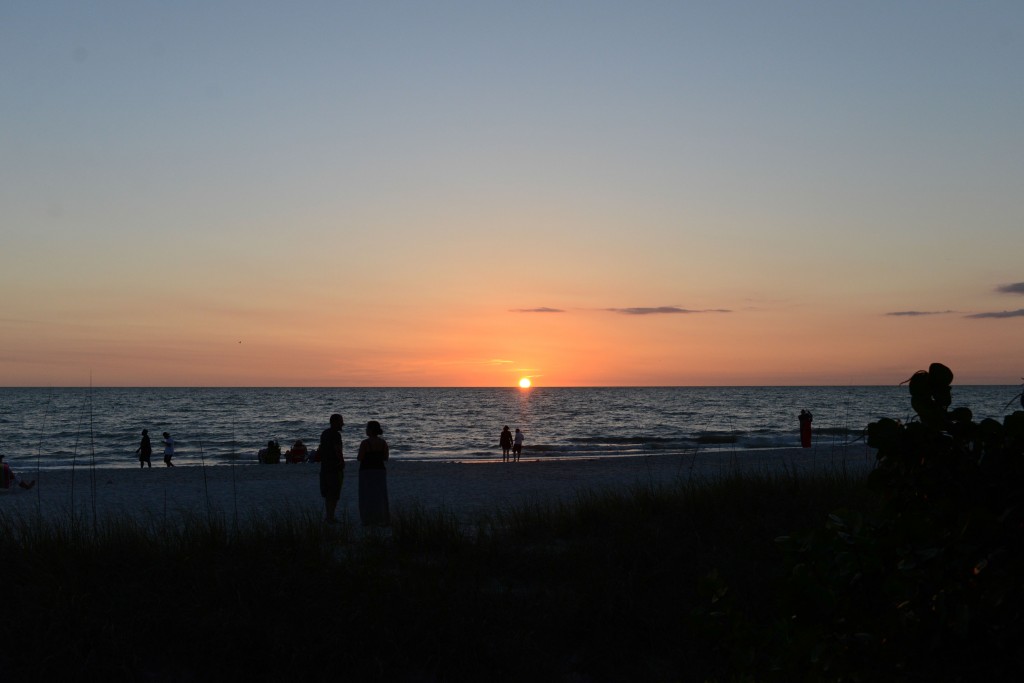 A sunset is seen on Naples beach in Naples, Florida on May 6, 2015. Photo by Ariel Min/PBS NewsHour

Perhaps B.o.B and his entourage don’t have the air miles for a trip between San Francisco and Seattle. No problem. All they need is a beach on the Pacific Coast (or an unobstructed view of the horizon).

As detailed by the folks at MinutePhysics, the horizon is one of the easiest ways to validate the Earth’s curvature. As the sun dips behind the horizon, it slips from your view in a bottom-up direction. If you watch the sunset while lying on your back, and then hop up as the last rays disappear, then you should be able to see the sunset again.

The same pattern applies to ships as they sail away — their hulls disappear from the bottom up. As MinutePhysics points out, if the Earth didn’t curve and the horizon didn’t exist, when you looked at Chicago from across Lake Michigan, you’d be able to see the the Rocky Mountains.

It’s always daytime somewhere and nighttime somewhere else. Five centuries of calculations argue that’s because the Earth is a spinning globe upon which the sun’s rays strike from a single direction.

You can test this idea with a lamp, a soccer ball and a dark room. Put the lamp and ball next to each other on a table. Now, turn off all the lights, and then switch on the lamp. Half of the ball should be illuminated, while the other half remains dark. If you want a facsimile of how this works for us, then replace the soccer ball with a globe.

The Flat Earth Society offers an alternative: The sun is a sphere with a diameter of 32 miles that is located approximately 3,000 miles above the surface of the Earth. They argue that the sun moves like a crib’s mobile, circling above our flat planetary disc.

If the sun is a spotlight, then why don’t we see sunbeams when they’re not shining directly over us? Image by Moriel Schottlender/smarterthanthat.com

The problem with this spotlight hypothesis is the sun doesn’t behave like a spotlight. Imagine you’re at a Broadway show, and you see a spotlight shining on a lead actor. You can see the light beams hitting their face, yet you’re sitting in darkness. But on Earth, you can’t stand in an open area and then look off in the distance and see the neighboring land basked in light.

That’s because the Earth’s curvature creates distinct places where light can land, which forms the basis of timezones.

Have you ever wondered why hurricanes swirl in one direction? The reason is the Coriolis Effect, and as National Geographic demonstrates, you can witness the same effect on a merry-go-round.

In the video, a woman wants to throw a ball toward someone sitting across from her while spinning counter clockwise on a merry-go-round. But rather than go straight, the ball appears to curve and land to her right. What gives?

If you hang a camera from above the roundabout, like these scientists from MIT did, you can see what happens. The ball does move in a straight line, but as a catcher rotates on the ride, he moves out of the ball’s path.

What the Coriolis effect looks like if standing freely above a merry-go-round. Image by Technical Services Group at MIT’s Department of Physics

In contrast, if the camera is attached to and spins with the merry-go-round, the ball appears to curve.

What the Coriolis effect looks like if riding on a merry-go-round. Image by Technical Services Group at MIT’s Department of Physics

The Earth is wider at the equator, so it rotates faster there than at the poles. Wind wants to push across the planet in straight lines from areas of high pressure to areas of low pressure, but the Earth’s roundness and rotation make the air flows appear to deflect off course. Peering down from space on the Northern Hemisphere, hurricane winds appear to deflect right, while the opposite happens below the equator.

Alternatively, if you tried to toss a paper plane in a straight line from the equator to a friend in North America, it would appear to curve out of the way. The same would happen if you flew in a straight line from the equatorial city of Quito, Ecuador to New York City. As you journeyed north in the sky, the Earth would rotate beneath you, moving New York City out of your path.

Space tourism is another option for those interested in seeing the Earth’s curves. The trip will cost upwards of $40 million, but once there, a celebrity can capture all sorts of footage of the planet’s roundness. Just look at these photos from Guy Laliberté, the former CEO of Cirque du Soleil, who traveled to the International Space Station in 2009.

Or take a gander at any number of photos collected by astronauts and satellites over the last half century. 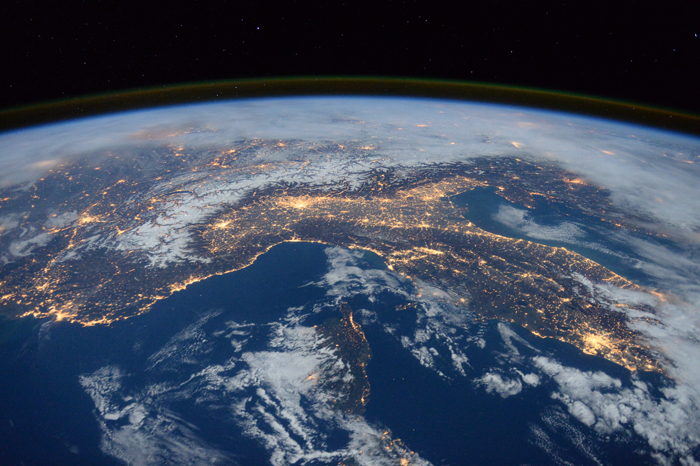 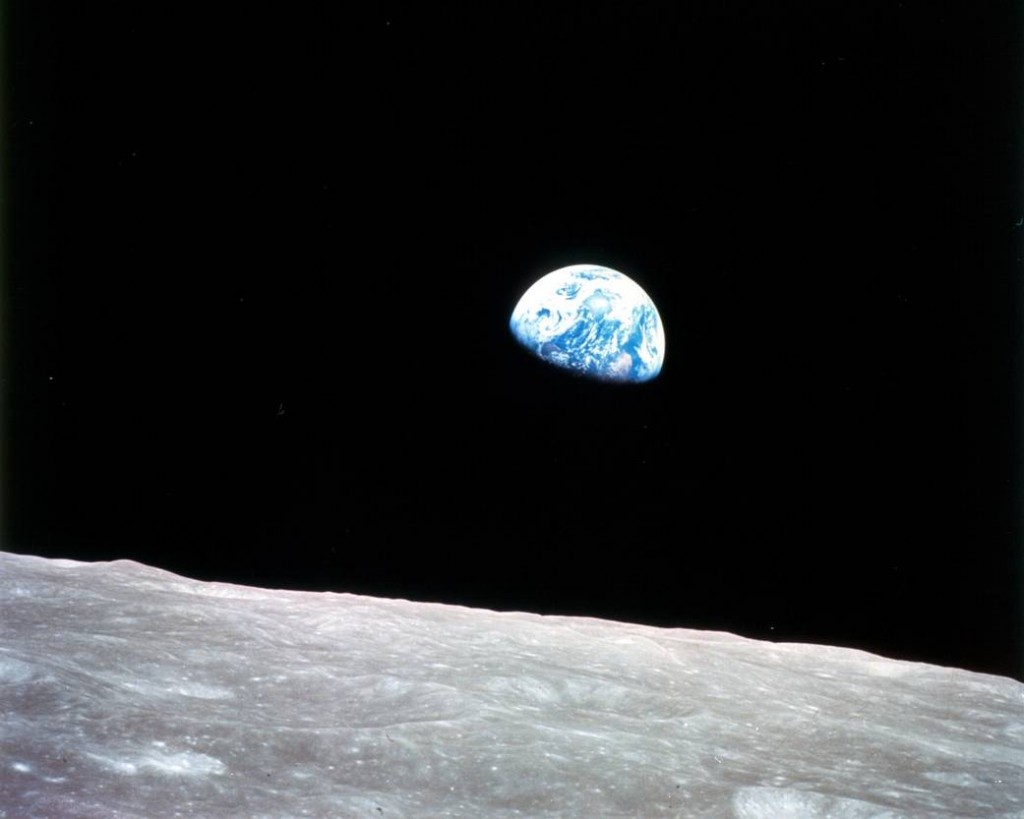 The Earth is seen rising above the lunar horizon from the Apollo 8 spacecraft on Christmas Eve, Dec. 24, 1968. Photo by NASA

Ok, the act of dunking a basketball doesn’t prove the Earth is round, but it does offer an opportunity for a confession: I’ve never been able to dunk a basketball. In my early 20s, I came close. I could jump and grab a 10-foot-high rim. I could even throw down a tennis ball, but my vertical leap couldn’t reach a height that allowed my hand to extend a basketball over a rim.

By contrast, my 6’8″ roommate Justin could dunk with ease. Now, I could have chosen to believe Justin’s jams were linked to something other than his height. Maybe his shoes had magic properties that lifted his body to loftier heights?

But throughout middle school and high school, something happened. My leaps improved the more that I played basketball. Growing calf muscles and month after month of countless jump shots corresponded with getting closer and closer to the rim. Justin trained too, and our confidence in the benefits of practicing grew as our leaps did.

Aside from the sun spotlight concept, Flat Earthers present a wide variety of explanations to discredit everything written above, such as:

Lunar eclipses are caused by a second object in space — an anti-moon — that blocks our view of the regular moon. (But if that’s the case, why can’t we see the anti-moon at other times?)

Eratosthenes’ measurements didn’t validate the planet’s curves, but rather that the sun moves away and toward a flat Earth.

Instead, their ideas require leaps of faith that far outpace a 5’0 teenager stretching his fingers toward a rim.

Left: Musician B.o.B claimed this week that the Earth is flat, but how does a person confirm the Earth's curves? Photo by REUTERS/Mario Anzuoni