7 things you didn’t know about reindeer

‘Tis the season for reindeer to occupy people’s minds — and decorate their sweaters. But these charismatic cervines are more than holiday icons; they are culturally important yet bizarre arctic animals. Here are a few surprising facts about the peculiar creature that is the reindeer.

1. Christmas cartoons got things all wrong

In the 1964 classic animated film, Rudolph the Red-Nosed Reindeer is thin, brown and wimpy.

Most Christmas decorations depict reindeer in a similar vein, but these portrayals are closer to an amalgamation of other deer species than they are to an actual reindeer.

Reindeer come in 14 subspecies — two of which are extinct — and they look nothing like their cartoon counterparts. While their colors and size vary, reindeer are invariably stocky, with thick necks, big hooves and square noses.

A male reindeer’s transformation from October to November.

2. Reindeer are the same species as caribou.

“Reindeer” is to “caribou,” as “donkey” is to “ass.” They are the same animals, but the word reindeer, like donkey, more often refers to the domesticated or semi-domesticated ones. Still, if you’ve ever seen a majestic caribou, you were looking at the species, Rangifer tarandus — or reindeer.

Antlers are branched bones that shed and grow back every year. These ornaments are exclusive to the deer family, which includes moose and elk.

Deer exhibit sexual dimorphism, meaning the males and females have separate and identifiable physical characteristics. In most deer, that means the males have antlers and the females don’t, barring anomalies. Some deer species have no antlers at all.

Reindeer, however, are the only deer species in which females have antlers too. 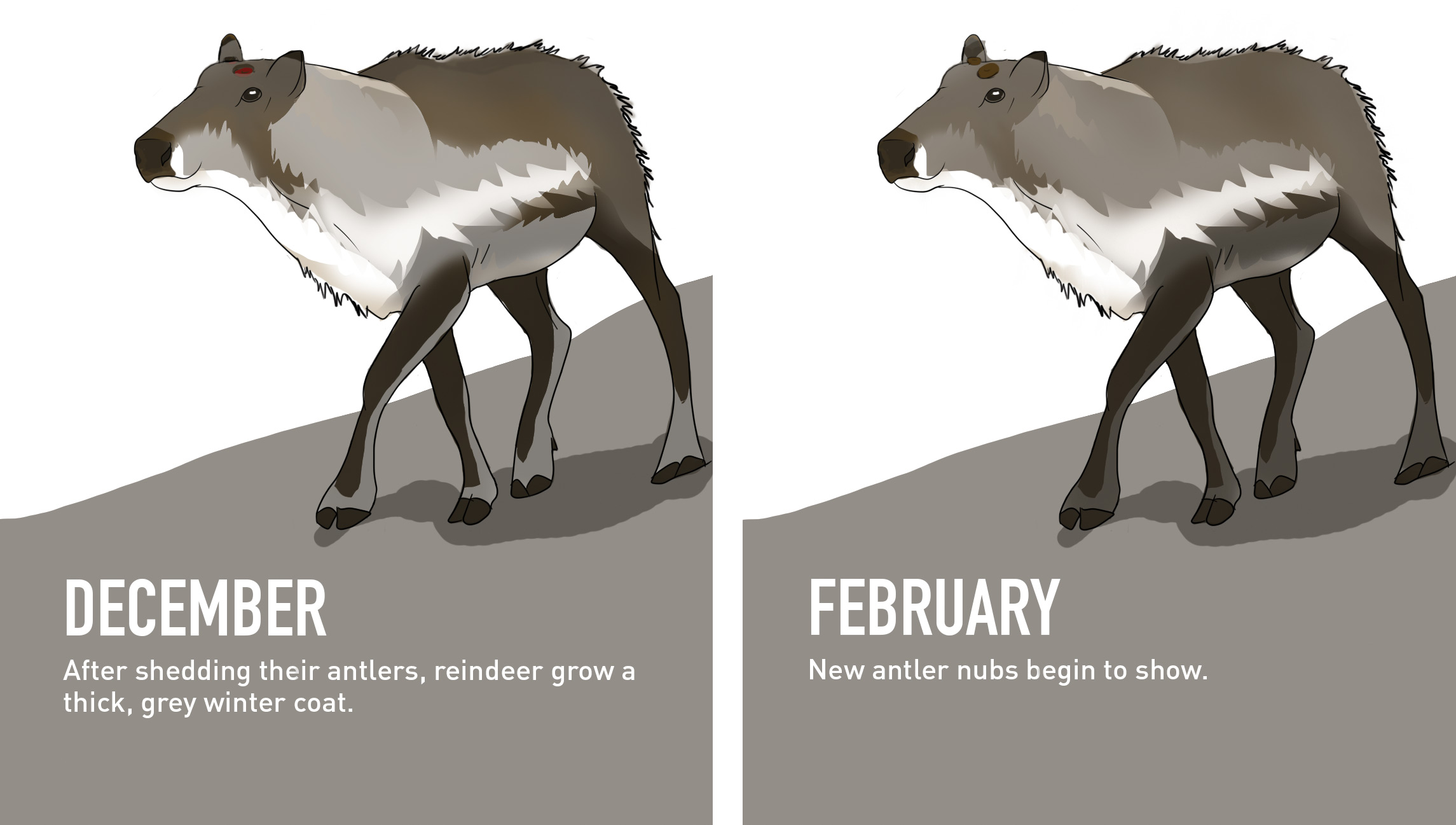 A male reindeer’s transformation from December to February.

4. Their eyes change in the summer and winter.

Reindeer live primarily in the Arctic, where winter is drastically colder and darker than the summer. Reindeer hooves are soft during warmer months, but in the winter, their hooves become hard and sharp for breaking through the ice to forage vegetation.

As a result of seasonal changes in light levels, reindeer eyes adapt. Their tapetum — the part of the eye behind the iris — changes color from gold in the summer to blue in the winter. However, you wouldn’t notice this shift unless you shined a light in the animals’ eyes.

Reindeer also shed their fluffy winter coats in the summer. Males and females both shed their antlers and grow them back each year, but in different seasons.

Diabetes researcher Andy Karter lived in Norway herding reindeer for a decade. The temperatures were so cold that they needed a warm material for clothing. So they dressed head to toe in reindeer skins, he said.

The skins are so warm because reindeer have two layers of hair: a dense undercoat, and a top layer of hollow hair. The air-filled hairs “float like a cork,” Karter said, which is useful for migrations. Some populations travel up to 3,000 miles and swim long distances along the way. People have even used reindeer hair to fill life jackets, Karter said. 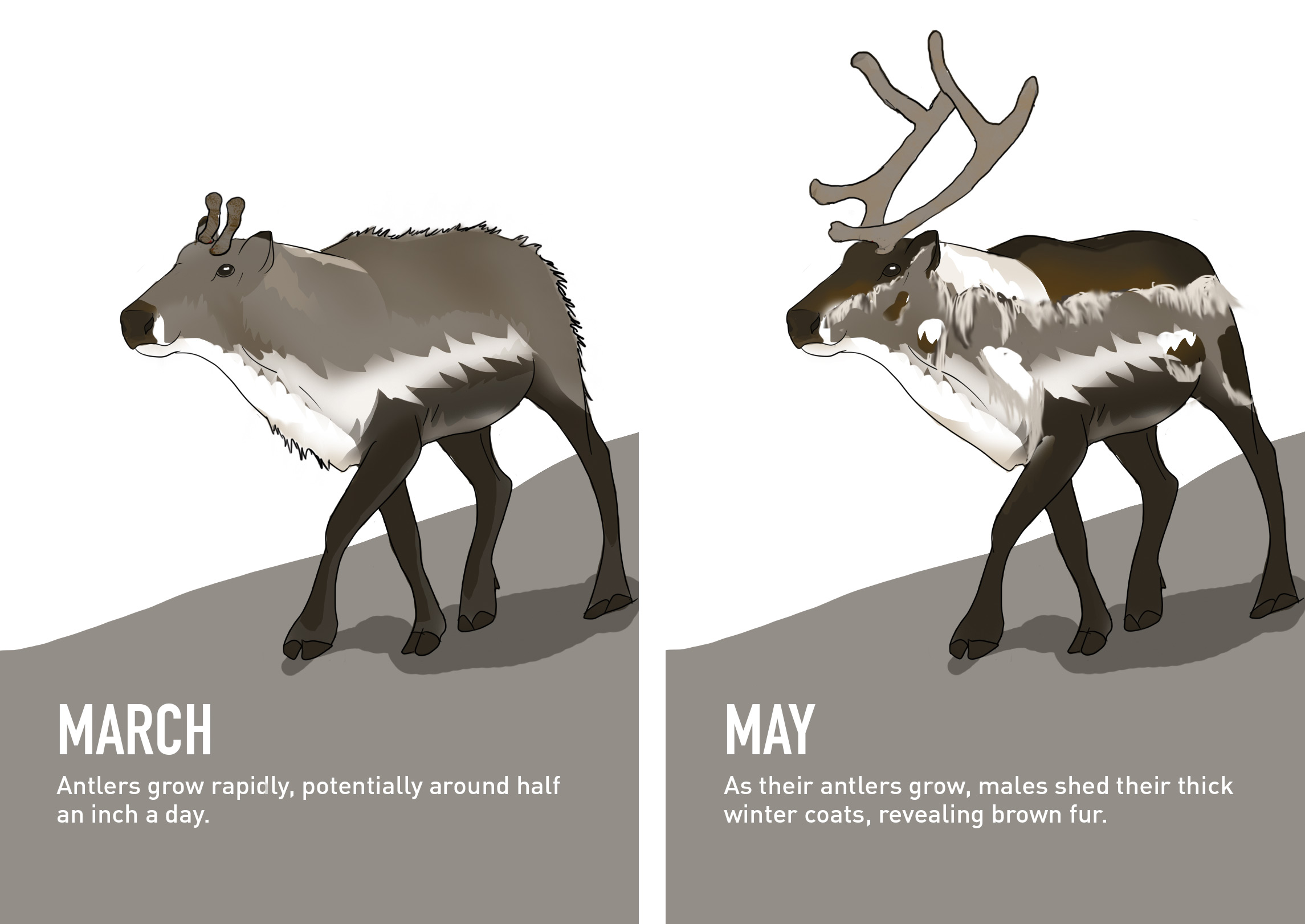 A male reindeer’s transformation from March to May.

6. Reindeer are the Swiss Army Knife of domestic animals.

For the Sami people, native to Scandinavia, reindeer herding is a major part of the heritage and economy. They, along with other indigenous people in the Arctic and subarctic, raise reindeer primarily for meat, which they eat and sell.

“They are the lifeblood of a lot of indigenous cultures,” Karter said. “It’s not just a way of making money, it’s a lifestyle. They live around the herds, they live with the herds. [Reindeer are] very important to their culture.”

Traditionally, reindeer were used for milk, skins, furs, blood to make blood sausages and the sinews for their sleds. Sami use the antlers for knife handles and tools. Some people even ride Siberian reindeer, which are larger than other subspecies.

However, things have changed with modern reindeer harvesting.

“Now the reindeer are slaughtered in certified slaughterhouses, and roundups are done by helicopter, motorcycle and snow machine,” Karter said. “It’s highly organized. Even though they still hold on to the tradition of free-ranging, for the most part.”

7. Climate change is harming reindeer, and the people who depend on them.

Reindeer eat “reindeer lichen,” and in the winter, they must paw through the ice on the ground to forage.

With warmer temperatures, ice melts, exposing water. The water evaporates, making wetter air and inducing rain. In 2013, unprecedented rainfall coated the ground in Siberia and froze, making it exceedingly difficult for the animals to break through and eat. Instead, 60,000 of them starved to death. A similar situation occurred in 2006, leaving 20,000 dead. A study in November linked these events to climate change. 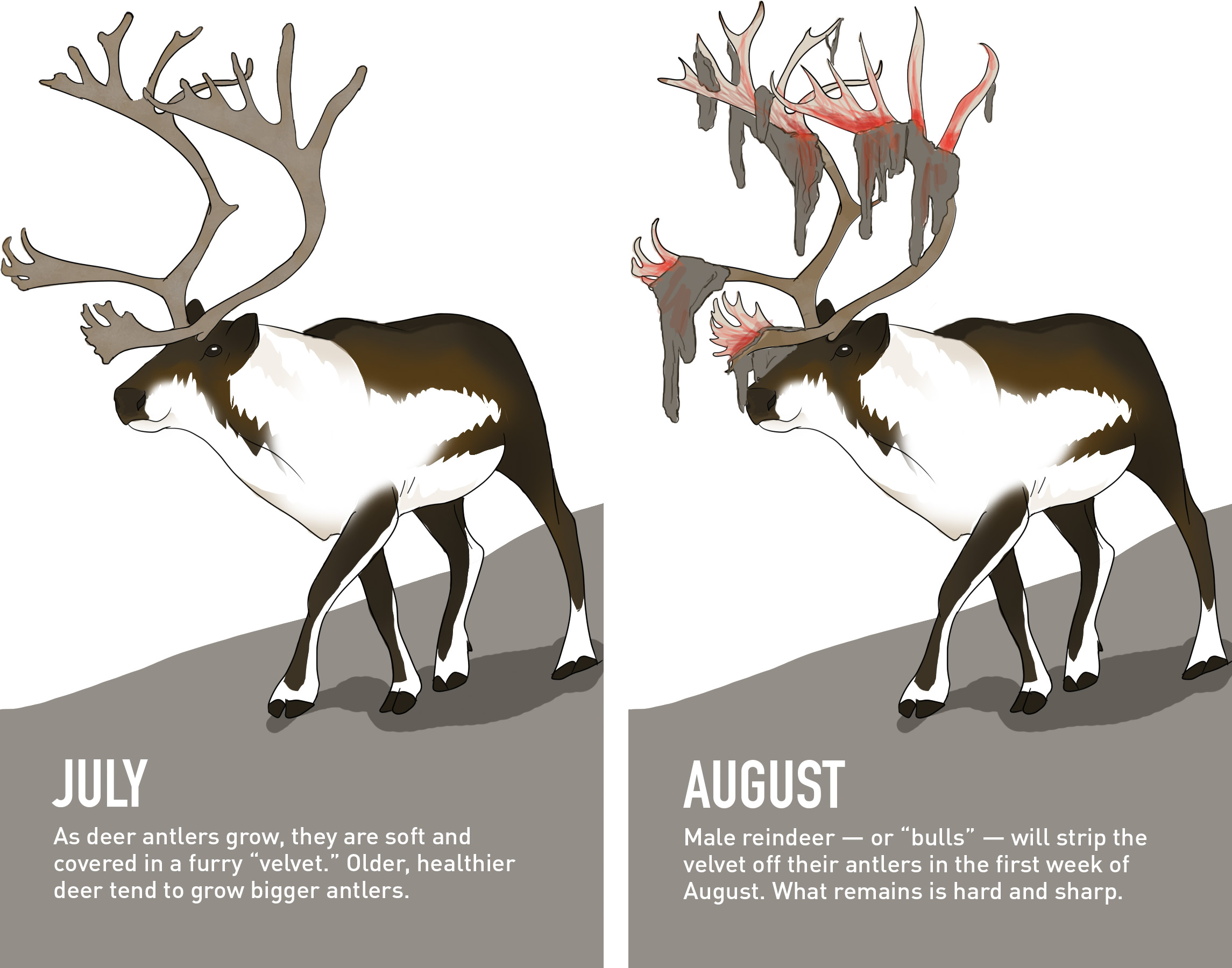 A male reindeer’s transformation from July to August.

The Siberian government has proposed a cull of 250,000 reindeer before Christmas this year. Officials insist that these killings are being done to reduce animal overpopulation. They worry there are too many animals without enough access to food and that the density of the animals could potentially spread disease. Reindeer herders argue that energy interests are at the root of the killings.

Above: Reindeer at the Cairgorm Herd wait to be fed on December 14, 2014 in The Cairngorms National Park, Scotland. — Reindeer were introduced to Scotland in 1952 by Swedish Sami reindeer herder, Mikel Utsi. Starting with just a few reindeer, the herd has now grown in numbers over the years and is currently at about 130 by controlling the breeding. Photo by Jeff J Mitchell/Getty Images