“It naturally wants to go higher and higher.”

That’s how Orville Wright described the first glider tested by him and his older brother Wilbur at Kitty Hawk, North Carolina, but in a way, the words encapsulate our innate quest to fly. Humans had stared enviously at birds for centuries, and it would take the Wright Brother another three years to successfully fly and land the first engine-powered airplane in 1903.

That first flight crossed just 120 feet and had only five witnesses outside of the brothers, but those brief 12 seconds spawned the age of the airplane. An age where kids gape at clouds from inside giant 747s and people cross oceans in hours.

Yesterday was the 144th birthday of Orville Wright (and National Aviation Day.) Today we take a deeper look at his personal life, as provided by the historian David McCullough and his 2015 biography of America’s aviation heroes, The Wright Brothers. 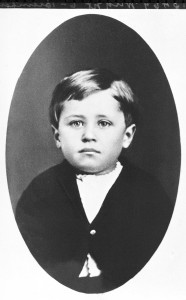 1. Orville was a thrifty hipster

In modern-day Portland or Brooklyn, New York, Orville Wright would have fit right in. Aside from the bushy mustache, a 1909 photograph portrayed Orville as a sharp but simple dresser who wore “snappy argyle socks” with wingtips, at a time when the latter were replacing boots as the popular fashion. His suits were well-tailored, often outmatching his brother’s style.

Orville brewed homemade candy. He also played the mandolin, so much so that he often drove his younger sister Katherine to say, “He sits around and picks that thing until I can hardly stay in the house the point of madness.”

The Wrights had a humble childhood in Dayton, Ohio. Their small wooden house was sparsely furnished. It lacked electricity and running water. But what they lacked in wealth, they made up for in reading, thanks to their father Bishop Milton Wright and his passion for books.

“Their father insisted that his kids have a good liberal arts education, even though Wilbur and Orville never went to college. They never even finished high school, but that’s no way to judge those who are informed and full of curiosity,” McCullough said.

Their thrifty childhood paid off when Orville and Wilbur branched out from owning a bicycle shop into tinkering with aviation. Over the three years that they tested their first glider and built a motorized plane, the Wrights only spent $1,000 on the project, which included parts and travel from Ohio to North Carolina. In comparison, a competing project by inventor Samuel Langley called the “The Great Aerodrome” cost $70,000, but failed to fly without crashing when tested in 1903.

2. Some say Orville was on the autism spectrum

Both brothers possessed a singular determination and focus when it came to their pursuits, but neither enjoyed celebrity after becoming internationally famous. Both were reluctant to speak in public, but Orville had always been especially shy outside of the home. Wilbur was often the public face of the Wright enterprise. He was an exceptional orator and wrote much of their correspondence to fellow inventors and scientists to learn about aviation.

Also when overstressed, Orville went through “peculiar spells”, as described by his family, where he could be moody, irritable and withdrawn. After spending years studying Orville and Wilbur’s past, novelist Tara Staley said she believed both brothers had autism spectrum disorder, Asperger’s syndrome.

McCullough says this conclusion would be misleading. Orville’s shyness was a handicap to the degree that he didn’t like being interviewed by the press, but he was talkative and witty with his family, especially with his little sister Katharine. 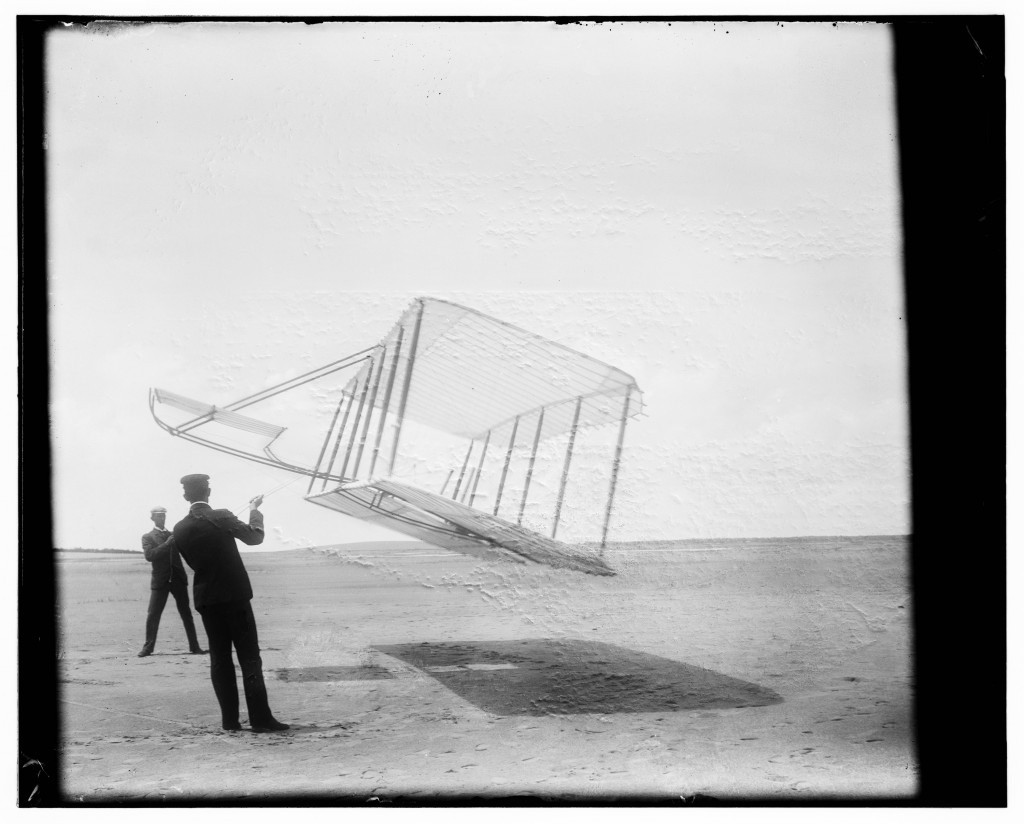 Katharine Wright, born three years to the day after Orville, was essentially the only female figure in Orville and Wilbur’s adult lives. Orville constantly exchanged letters and telegrams with Katharine whenever he left to spend time at Kitty Hawk. They were confidants.

Their mother died when they were teenagers, leaving Katharine as the “woman of the house,” McCullough said. The two oldest Wright brothers — Reuchlin and Lorin — had already departed the nest, and their father frequently traveled for religious missions.

However, the extra responsibilities didn’t impede her intellectual pursuits, which were on par with Wilbur’s and Orville’s, McCullough said.

“She was very bright, about 5’1 in height, and the only one of the family who had a degree from college,” McCullough said. “She had a terrific sense of humor and was more sociable than the brothers.”

And her social skills came in handy when the family became world famous. She was very savvy at talking to the press and navigating the family’s fame. “The brothers had no interest in the limelight,” McCullough said.

Neither brother was interested in marriage. Orville responded to questions on the topic by saying that Wilber should marry first as the older brother. Whereas Wilbur famously told reporters that he didn’t have time for both a wife and an airplane.

Orville cared so much for his sister Katharine that when she did marry at the age of 52, he was inconsolable. He refused to attend the wedding and didn’t speak to her for two years. It wasn’t until she became fatally ill with pneumonia that he finally visited, right before her death in spring 1929.

4. He helped to launch the career of an African-American poet

While Wilbur was the entrepreneur behind first plane, Orville was the project’s engineering maestro. Both were skilled builders, and they operated a successful bike shop that funded their aviation adventures. However, Orville had a particular skill with tinkering.

In 1889, while still a teenager in high school, Orville built his own printing press from a “discarded tombstone, a buggy spring and scrap metal” after serving as an apprentice in a print shop, according to McCullough’s book.

With the press, Orville began publishing his own newspaper, West Side News, which covered local events in his neighborhood. One contributor was his friend, Paul Laurence Dunbar, the only African-American in their high school and the class poet. Later, Orville’s father would have the United Brethren Church publish Dunbar’s first book of poems. The writer was later discovered by the editor of The Atlantic Monthly, and he became nationally renown.

Moreover, the Wright Brothers signed up their bicycle shop mechanic Charlie Taylor to build an engine for their first plane, Flyer I, but McCullough says Orville was likely instrumental in the decision to use aluminum as a building material. The decision made the engine light enough for their makeshift flying machine. 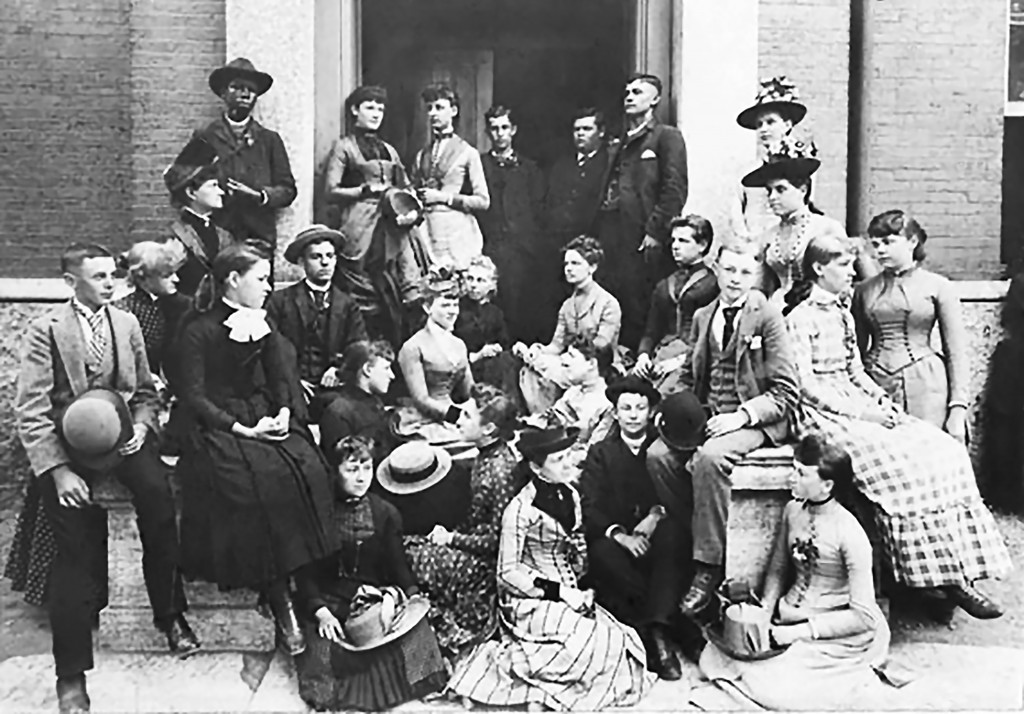 5. Kitty Hawk turned Orville and his brother into outdoorsmen

In autumn 1900, Wilbur Wright made his first trip to Kitty Hawk and almost drowned on the way. The city’s barrier island was only accessible by boat, and his ferrymen’s boat sprung a leak while a gale storm ripped the schooner’s mainsail to tatters. After frantically bailing water and a fretful overnight at anchor, Wilbur arrived at Kitty Hawk on September 13 and set up the camp that would house their pursuits, on and off, in the coming years. Orville arrived two weeks later, and the pair soon learned that survival on the Outer Banks wasn’t easy. Though the waters teemed with fish, farms were less fertile, and cows produced little milk. They survived primarily on a diet of tomatoes, local eggs and hot biscuits made without milk. Orville once stated the only things that thrived in the Outer Banks were bed bugs, mosquitos and wood ticks, according to McCullough.

The brothers had picked Kitty Hawk because they believed its windy weather suited their experiments, but gusts would rip their tent from the ground. When they bent down to hold it, sand blew in their eyes. They returned to Kitty Hawk each year and persevered through hot summers and clouds of mosquitos that Orville described as “Misery! Misery!” However, in the end, they did appreciate Kitty Hawk for its natural beauty. 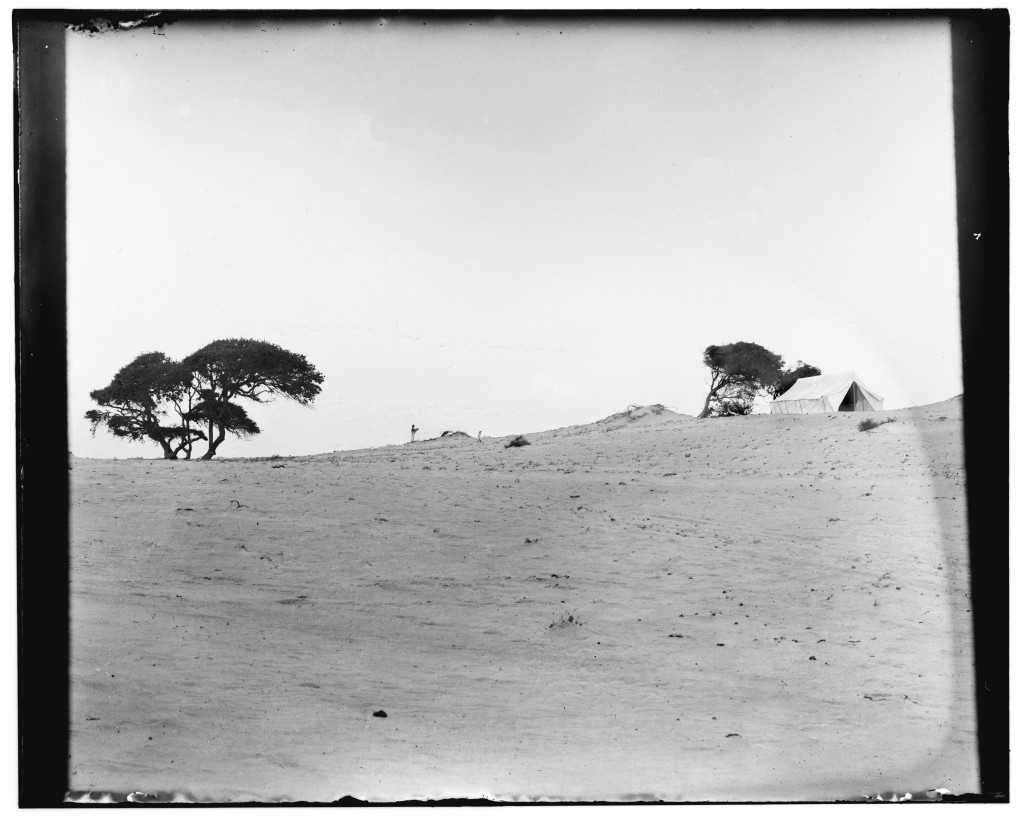 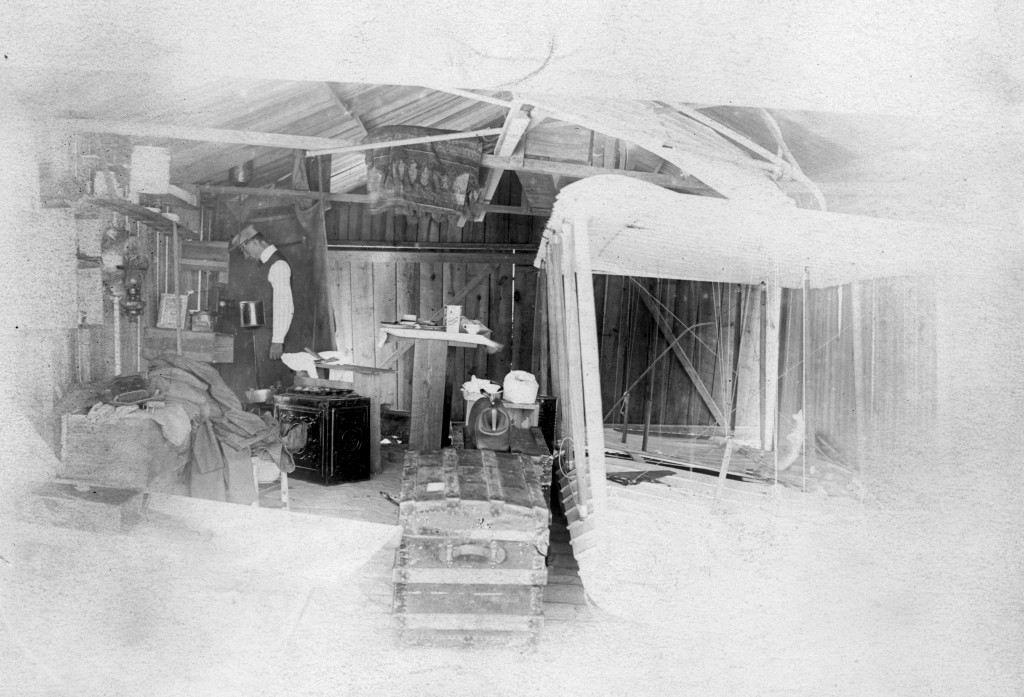 Camp interior in 1902 with glider at right in foreground. Courtesy of David McCullough/The Wright Brothers/Simon & Schuster

Wilbur won a coin toss to be the first to fly their motorized plane, but he pulled too hard on the controls and the craft crashed after only 100 feet. After two days of repairs, it was Orville’s turn on December 17, 1903. Though townspeople typically appeared by the dozen to watch the Wright brothers’ experiments, the weather was so frigid and windy that only five locals watched what would be become the first successful flight by an airplane. Later that day, Wilbur had his turn and flew over 852 feet over the course of 59 seconds.

So few witnesses attended that the Wrights struggled to convince reporters. Most folks in their hometown didn’t believe them, and the U.S. government paid little attention. It would take another two years and moving their test ground to Huffman Prairie in Ohio before they garnered enough publicity to attract overseas interest. Wilbur made the first major public demonstration at Le Mans, France on August 8, 1908.

7. Orville and Wilbur rarely flew together

After the brothers built a plane big enough for two passengers, they maintained a policy of not flying together. Early flight was dangerous, and they wanted to ensure that at least one of them could continue their work in the event of a fatal crash, such as the one that almost took Orville’s life on September 17, 1908.

During a demonstration for the U.S. Army at Fort Myer, Virginia, Orville was coasting at an altitude of 125 feet when his plane suddenly nosedived. Orville survived, but spent a month in the hospital and suffered from recurrent fractures in his hip. His passenger that day, 26-year-old Lieutenant Thomas E. Selfridge, suffered a severe head injury — and became the first person to ever die in plane crash.

Orville suspected the crash was caused by a faulty propeller, and he continued to fly, though his injuries forced him to retire in 1918 at the age of 46.

The brothers teamed with a group of industrialists to establish the Wright Company in 1909, almost instantly making them wealthy. Though much of their time was devoted to patent disputes, the brothers opened a flight school and sold airplane designs and hardware. 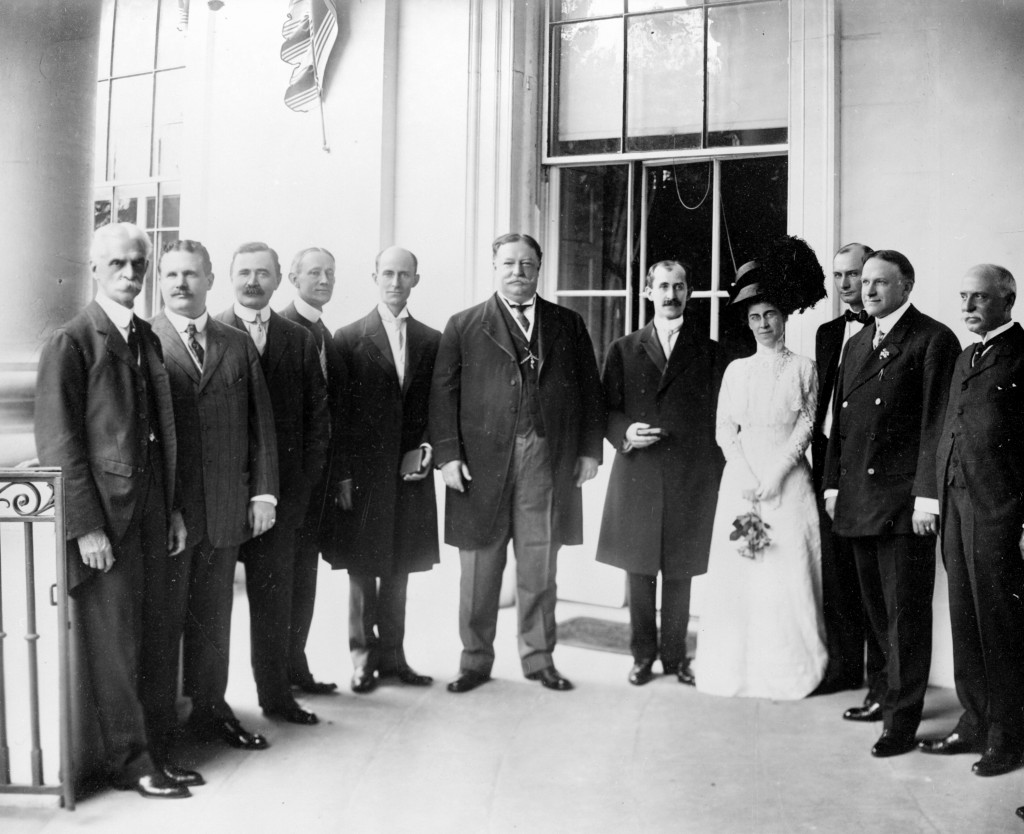 Wilbur died of typhoid fever in 1912, but Orville lived until 1948, when he died of a heart attack at age 77. Before his passing, he met Charles Lindbergh in 1927 and flew for the last time with Howard Hughes onboard the Lockheed Constellation in 1944. Orville witnessed many milestones in aviation — the creation of jet propulsion and the first rocket — but he also saw the destruction caused by bombers in World War II.

“We dared to hope we had invented something that would bring lasting peace to the Earth. But we were wrong. We underestimated man’s capacity to hate and to corrupt good means for an evil end,” Orville said in an article with the St. Louis Post Dispatch on November 7, 1943. “No, I don’t have any regrets about my part in the invention of the airplane, though no one could deplore more than I the destruction it has caused.”

Left: The first flight photo, 10:35 a.m. December 17, 1903, showing the Wright 1903 Flyer just after lift off from the launching dolly at Kill Devil Hill, Kitty Hawk, North Carolina. Orville Wright is at the controls, and Wilbur Wright watches from near the right wing tip. This is a one-half right rear view of the aeroplane. Courtesy of David McCullough/The Wright Brothers/Simon & Schuster