8 things you didn’t know about the moon

Man first set foot on the moon on July 20, 1969, an event that marked the peak in the race to explore space beginning more than a decade earlier between the United States and the former Soviet Union.

But it wasn’t the walk on the moon that inspired Stephen Edberg, a NASA Jet Propulsion Laboratory astronomer, to study Earth’s closest, egg-shaped satellite. It was his family’s outings to see lunar eclipses, he told PBS NewsHour.

On Sunday, a rare, red-tinted supermoon lunar eclipse — last seen in 1982 — will be visible in the night sky.

In honor of that celestial event, here are eight things you may not have known about the moon.

1. The moon doesn’t orbit the Earth.

Instead, it travels with our planet – sometimes behind, sometimes ahead – as Earth revolves around the sun.

In fact, the sun is in charge of the moon’s motion.

Edberg believes the reason we think the moon orbits Earth is because it seems that way from our perspective. We see it opposite the sun in one instant (full moon) and then two weeks later, it may cast a shadow on the Earth, while in the direction of the sun.

But Edberg points out that we are missing something and should look at the bigger picture. Over the course of a year, we must consider the moon as it relates to the Earth, as well as the sun.

Once we do that, we will see that the moon’s path is actually around the sun, as it moves in tandem with Earth—no loops.

Wired magazine looked at the moon’s path in relation to the Earth-Moon-Sun system in 2012.

2. There are moon trees on Earth. 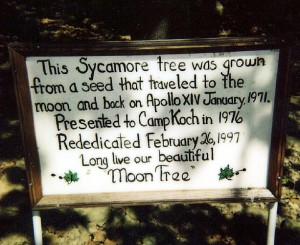 Sycamore, Sweetgum and Redwood Moon Trees (trees whose seeds traveled to the moon aboard Apollo 14), were planted throughout the U.S. following the 1971 mission. Photo from National Space Science Data Center

Hundreds of tree seeds were brought to the moon during the 1971 Apollo 14 mission.

After returning to Earth, the seeds were germinated and the resulting moon tree seedlings were planted across the United States, often as part of the nation’s bicentennial celebration in 1976, according to NASA’s National Space Science Data Center.

NASA’s Dave Williams has been keeping track of the moon trees now found in places like Cannelton, Ind. at a Girl Scout camp.

Think of it like this, Edberg explained: If you put your arm and fist out in front of you and turn around in a circle, you see one thing (your fingernails and inner, near side of the fist).

Someone who is watching you sees something else (your knuckles and the outer, far side of your fist).

Since the moon is tidally locked to our planet, we always see it from the same perspective.

The “dark side” that we know from popular culture – think Pink Floyd’s 1973 album “Dark Side of the Moon” and a 1990 thriller of the same name – is really the far, or night side.

It is the part of the moon we never see and one which has a day-night cycle opposite to the one we witness on the near side, according to Edberg.

On Aug. 7, NASA released images of the rarely-seen far side of the moon. 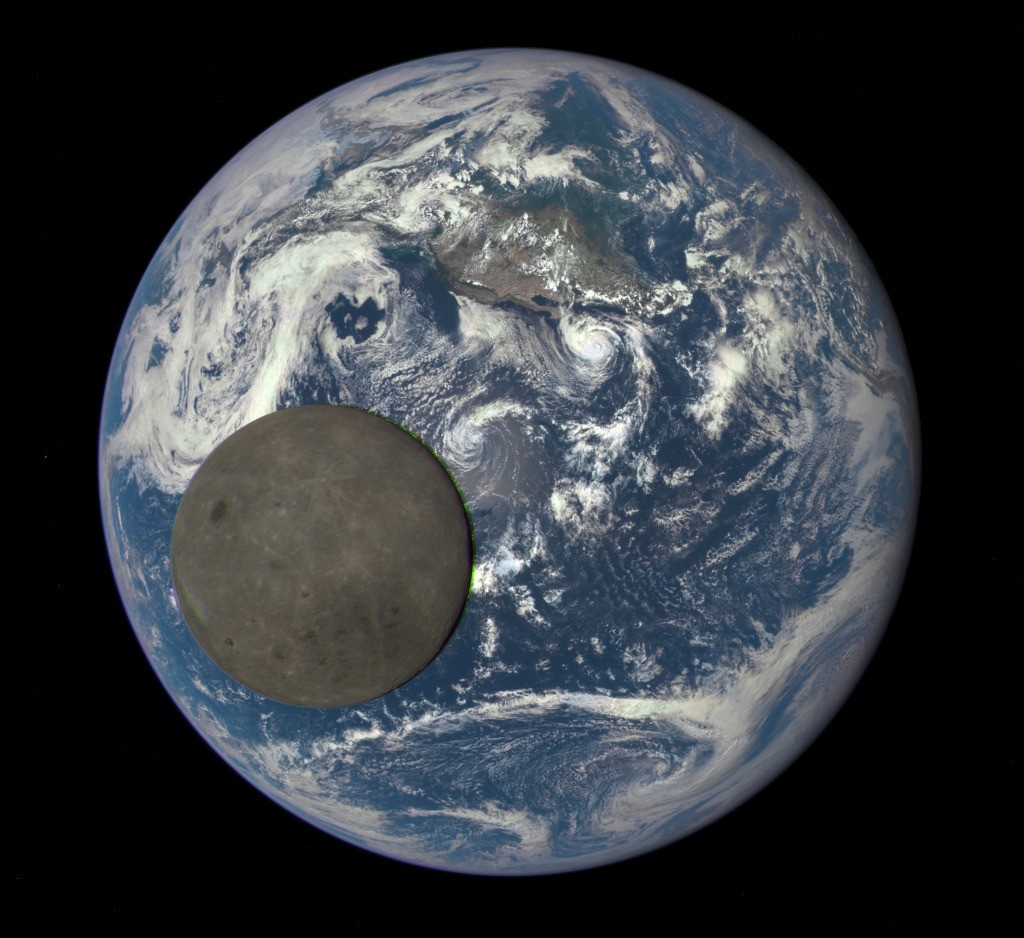 A never-before-seen image of the far side of the moon, as captured by NASA.
Image by NASA, NOAA/DSCOVR

4. Over time, we see more than half of the moon, thanks to libration.

The moon moves along its orbital path and farther away from Earth (at a rate of roughly one inch per year), while traveling with our planet around the sun.

If you were to look closely at the moon as it accelerates and decelerates on that voyage, you would also see it rock north-south and wobble east-west in a motion known as libration.

The result of that motion: A glimpse of the orb that is usually hidden (an additional nine percent).

Sadly though, we will never see the other 41 percent.

5. Helium-3 from the moon could possibly solve Earth’s energy issues.

The sun’s solar wind is electrically charged, and occasionally it collides with the moon and is absorbed by the rocks on the moon’s surface.

One of the most valuable gases contained in that wind and captured by those rocks is helium-3, a rare isotope of helium-4 (commonly used to inflate balloons).

Helium-3 fuses easily and would be ideal for use in a nuclear fusion reactor to generate energy.

One hundred tons of helium-3 could satisfy Earth’s energy needs for a year, according to Extreme Tech. The moon’s surface contains roughly five million tons of helium-3, while Earth has around 15 tons.

“The idea is to go to the moon, release helium-3 in a mine, put it in a tank and ship it to Earth,” Edberg said.

“But I think we’re a long way from that happening.” 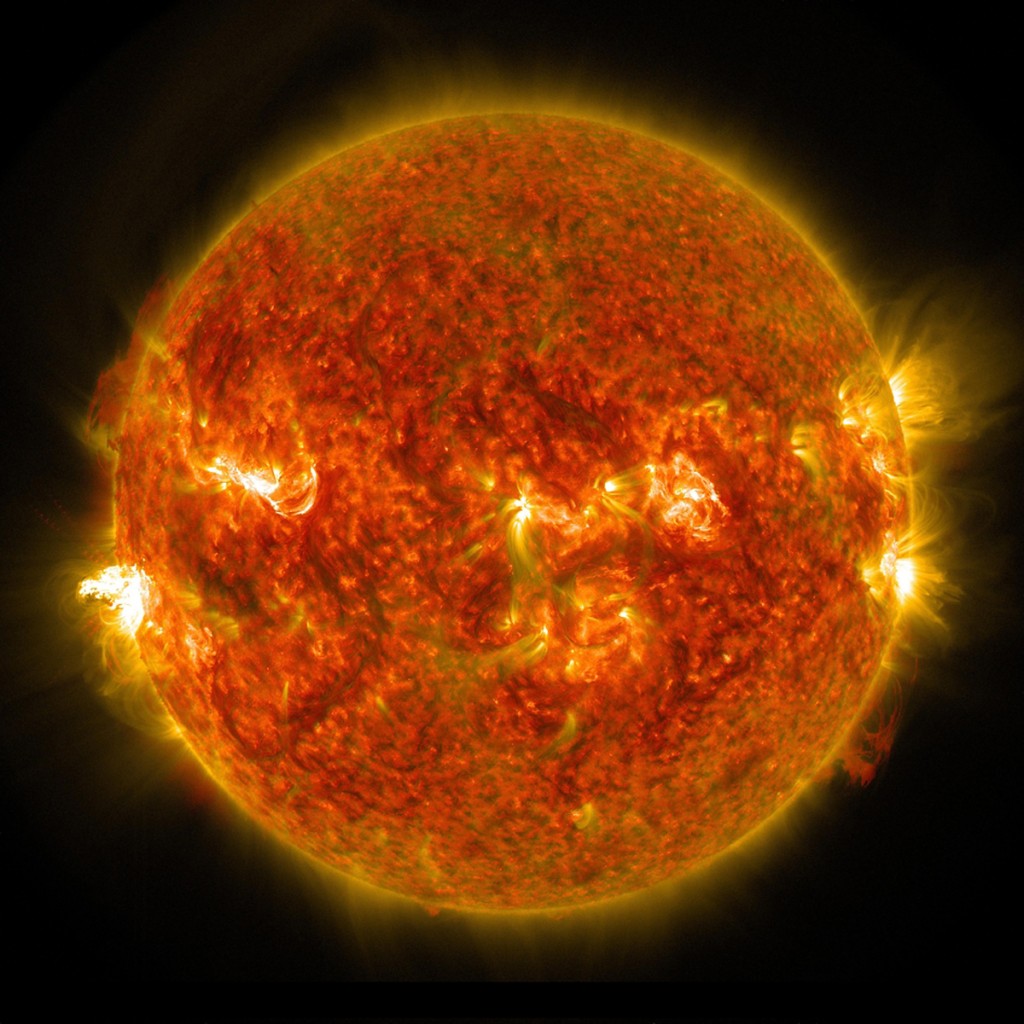 The sun emits a mid-level solar flare which erupted on the left side of the sun on August 24, 2014. The sun’s solar wind, which sometimes collides with the moon, contains helium-3, a gas that could help solve Earth’s energy problems. Image by NASA/Reuters

6. Is there any truth to that full moon-madness myth?

The suggestion that the brain, one of the most water-laden organs in the body, is influenced by the moon, is one that dates back multiple millennia, perhaps to the time of Greek philosopher Aristotle, according to the Scientific American.

Since the moon’s gravitational pull on Earth controls ocean tides and humans are made up of roughly 60 percent water (with the brain composed of 73 percent water), Aristotle and Roman scientist Pliny the Elder believed that the moon had a similar effect or pull on us.

This idea gave rise to the term “lunar lunacy”, “the Transylvania effect” (a term used heavily in Europe throughout the Middle Ages) and “moonstruck”.

Films like 1941’s “The Wolf Man” and 1987’s “Moonstruck” further perpetuated the theory, which associated upticks in psychiatric admissions, car accidents, murders and other crimes with full moons.

The British seaside town of Brighton opted to have extra police officers on patrol during full moons in 2007. According to the BBC, the decision came after research by the force determined that there was an increase in violent incidents during full moons (as well as on paydays).

Yet science tells us that there doesn’t seem to be a significant statistical relationship between human behavior and the full moon, according to several studies, including one done in 1985 by U.S. psychologists John Rotton and Ivan Kelly.

Instead of the moon’s pull affecting our psyche, perhaps it is simply the added light that results in higher crime rates. At least that is what police in West Michigan believed in 2014, when they decided to put additional cops on the streets for a full moon that coincided with the superstitious date of Friday the 13th.

7. The case of the missing moon rocks.

During the 1970s, the Nixon administration gave rocks taken from the moon’s surface during the Apollo 11 and Apollo 17 missions to the leaders of 270 nations, as well as states.

“We’d like to share a piece of this rock with so many of the countries throughout the world,” Apollo 17 astronaut Eugene Cernan said about the lunar meteorites (later known as Goodwill Moon Rocks).

Unfortunately, more than 100 of those rocks went unaccounted for and are suspected to be circulating in the black market.

While working at NASA in 1998, Joseph Gutheinz created a covert operation called Operation Lunar Eclipse to crack down on the illegal sale of these rocks.

Why all the fuss? A pea-sized piece of moon rock could garner up to $5 million on the black market, according to the BBC.

8. The moon may belong to no one, but a someone named Dennis Hope.

Or so he believes.

In 1980, seemingly exploiting a loophole in the 1967 United Nations Treaty on Space Ownership, which states that no “one country” may lay claim to the solar system, Nevada resident Dennis Hope wrote to the UN and declared individual ownership.

He did not receive a response.

But why wait? Hope set up the Lunar Embassy and began selling one-acre plots for $19.99 each.

He claims to have sold extraterrestrial property to celebrities and three former U.S. presidents.

For the UN, the solar system is considered in the same way as the world’s oceans: outside the economic zone and therefore belonging to everyone on Earth.

“I don’t know if Dennis Hope doesn’t understand this or if he is just trying to force the issue to get some legal interpretations,” Edberg said, “so that development of resources in the sky can begin with less legal uncertainty.”

Left: Frame from "A Trip to the Moon" (Le Voyage dans la lune), a French silent film directed by Georges Melies in 1902. Photo by Apic/Getty Images