The global fight against deadly brain-eating amoeba is gaining ground

The deaths hit the headlines every summer, sometimes five or six of them across the country. They’re newsworthy for their rarity and for how innocuous the events leading up to them are — it’s usually a young person who was swimming in a lake, got some water up their nose, and within days, was dead.

The cause is an amoeba called Naegleria fowleri, which when it infects the brain, causes massive swelling that is almost always fatal. Over the past half-decade, 137 people in the U.S. have died of the infection.

That rarity means that hardly any research money exists to find treatments. The best line of attack at present is a combination of drugs designed for other conditions.

“Even with the best drug combinations, the fatality rate is over 98 percent,” said Dennis Kyle, an infectious disease researcher at the University of South Florida. “People are dying from this disease all the time, and we really have nothing to treat it effectively.”

But Kyle and his team are working to change that reality. Borrowing from techniques used to develop drugs for diseases like malaria, they have created the first high-volume screening setup to hunt for compounds that kill N. fowleri. With the help of collaborators, Kyle has amassed a collection of over 30,000 natural compounds gathered from far-flung corners of the globe, including microbes fished out of mangrove swamps, salty Antarctic oceans, and off sea sponges in the Gulf of Mexico.

Adding this supply to their arsenal of synthetic compounds and already-approved FDA drugs, the team is optimistic that they will eventually find something that can enter the human brain and take the amoeba out.

The amoebas, which are thought to thrive in the soil and scum layers of warm waters, enter the brain when water is forced up the nose. Once there, they feed on brain matter, leading to rapid inflammation. Of all U.S. victims, only three have survived. The antimicrobial drug miltefosine is the most promising existing treatment, and is credited with helping save two children in 2013. But it’s considered an investigational treatment, and others treated with the drug have not survived.

Kyle and his group hope that a systematic survey of natural compounds will turn up a better drug.

“We think that microorganisms use chemical warfare — if you like — to kill other things that might be fighting for the same resources,” said Cedric Pearce, one of Kyle’s collaborators and founder of Mycosynthetix, a small company which boasts a library of 55,000 fungal strains from all over the world.

Read More: A radically simple idea may open the door to a new world of antibiotics

Kyle’s lab can screen about 7,500 compounds in 72 hours, an improvement over other methods that took scientists about a week to evaluate a handful of candidate molecules. The speed not only allows his team to examine more compounds, it also means they are screening for fast-acting compounds — an important consideration for an infection that can kill within days of initial symptoms. In test-tube studies, some of these fast-acting compounds are 20 times more potent than miltefosine. Pearce said the team has already identified hundreds of compounds that kill amoeba in the lab.

A different tack to finding a treatment for N. fowleri infection is being pursued by a research group in Seattle. Rather than broadly screening a bunch of compounds in a bottom-up fashion, the Seattle Structural Genomics Center for Infectious Disease aims to design a drug from the top down. They are using X-rays to understand the structure of proteins that keep N. fowleri alive, and then using computer modeling to develop compounds to target them.

Working alongside Kyle, the Seattle group is in the early stages of investigating 157 different N. fowleri proteins. The researchers hope their different approaches will meet in the middle, said Robin Stacy, senior project manager for the center, using computer modeling to tweak Kyle’s most promising compounds. 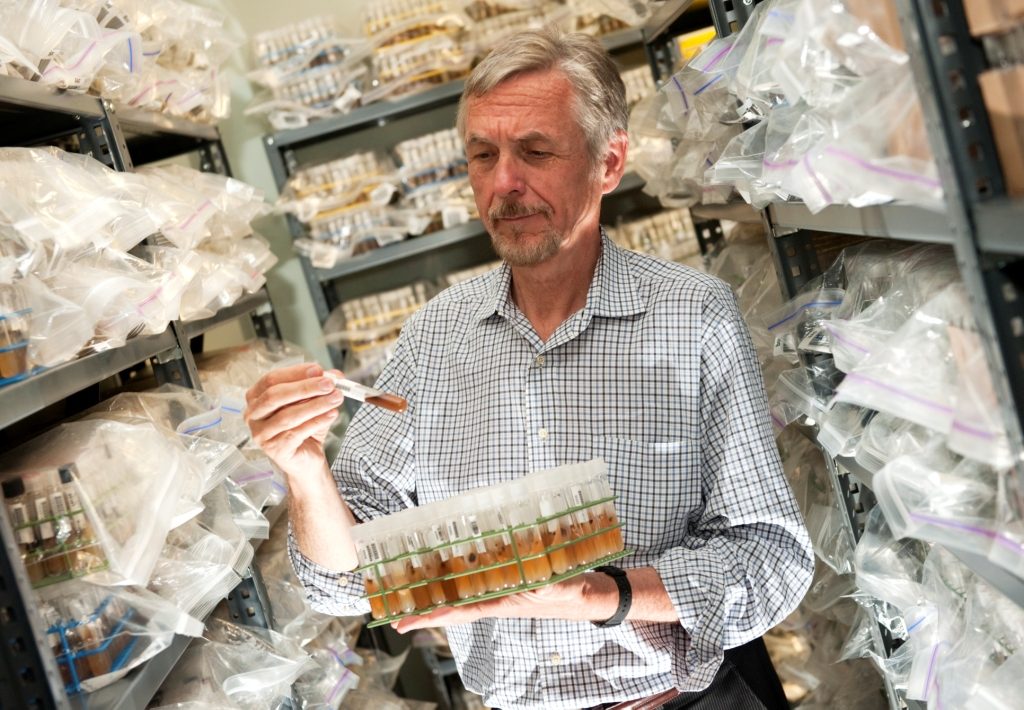 Cedric Pearce stands in his culture room surrounded by a quarter of a million test tubes filled with fungi. Photo by David Wilson/Chris English/UNC Greensboro

Last year Kyle’s group reported their first drug candidates, after screening about 150 synthetic antimicrobial chemicals. The team is now testing eight of those compounds in mice, hoping to identify versions that can cross the blood-brain barrier. At the same time, they continue to search for even more potent compounds from nature.

Their work “looks quite promising,” said Elizabeth Winzeler, a developmental biologist who studies malaria at the University of California, San Diego, and who is not involved in the research. “We and others in the field have used the same kind of approach and it’s worked quite well” to develop treatments against malaria. She cautioned, though, that the steps in drug development are numerous and complex and that it’s not unusual for a decade to pass between the discovery of molecular candidates and when drugs make it to the shelf.

Finding a treatment may be more important than ever as unusual cases have startled U.S. health officials in the last five years. Infections contracted in Minnesota lakes — 600 miles farther north than ever before — and the first deaths from treated tap water have led some experts to hypothesize that a changing climate is expanding the range and transmission routes of these amoebas.

Beach urges awareness but not fear. To reduce the already-tiny risk of infection, the CDC recommends people use distilled and sterile water for nasal rinses, not submerge their heads in warm and brackish water, and consider wearing nose clips during water sports.

Read More: The superbugs are winning the battle against us

Funding for research, meanwhile, has been rising but is still sparse. The National Institutes of Health awarded less than $800,000 in grants to scientists studying N. fowleri for 2016 — and about two-thirds of that went to Kyle and Pearce’s group.

One reason for the low dollar amount is the rarity of the disease relative to others, says Lee Hall, chief of the Parasitology and International Programs Branch of the NIH’s National Institute of Allergy and Infectious Diseases. Another is that few researchers have applied for grants to study this disease.

Kyle and Pearce are planning to apply for a new grant in September, and this time they will be asking for “a lot more money,” said Pearce.

“There’s a significant need for more research,” said Kyle. “Better awareness of this in the research community is as important as it is in the general community.”

This article is reproduced with permission from STAT. It was first published on July 22, 2016. Find the original story here.

Left: The Naegleria fowleri amoeba seen under the microscope. Photo by Dr. Visvesvara/CDC