It weighs as much as 43,000 cars, swirling nonstop in the ocean currents between California and Hawaii. The Great Pacific Garbage Patch is an accidental human disaster, consisting of fishing nets, plastic containers and trillions of unidentifiable plastic fragments scattered across an area twice as big as Texas.

Faced with a problem of this magnitude, most environmental groups have focused on tackling plastic pollution at the source — on land. But earlier this month, The Ocean Cleanup — a group of engineers, researchers and ocean lovers — kicked off an ambitious and potentially risky plan to directly scoop abandoned plastic out of the ocean.

The Netherlands-based project launched a 2,000-foot-long floating boom out of San Francisco Bay on Sept. 8, marking the first full-fledged test of their device. On Oct. 3, the device passed its initial testing phase and began its journey more than 1,000 miles offshore.

While the 5-year-old project has been hailed as one solution for ocean plastic pollution, some researchers have expressed concern. The project — which has raised $31.5 million in mostly private funding — may grow to be the largest human-made structure ever released in the oceans, with a parallel potential for failure or harm to marine life.

System 001 is back in towing config and is on it's way to the Great Pacific Garbage Patch right now pic.twitter.com/V6JnL35ne0

How the ocean cleanup device works

The length of about six and a half football fields, the device is meant to travel with wind, waves and storms, collecting trash as its buoyant plastic tubes float along. An impermeable skirt stretches almost 10 feet underwater to sweep up pieces of plastic below the surface.

Founder Boyan Slat, 24, left his university in 2013 to start The Ocean Cleanup, and since then the system’s design has changed drastically. For the most recent iteration, the organization built a series of free-floating plastic booms that will corral widely scattered debris for later pickup by boat. 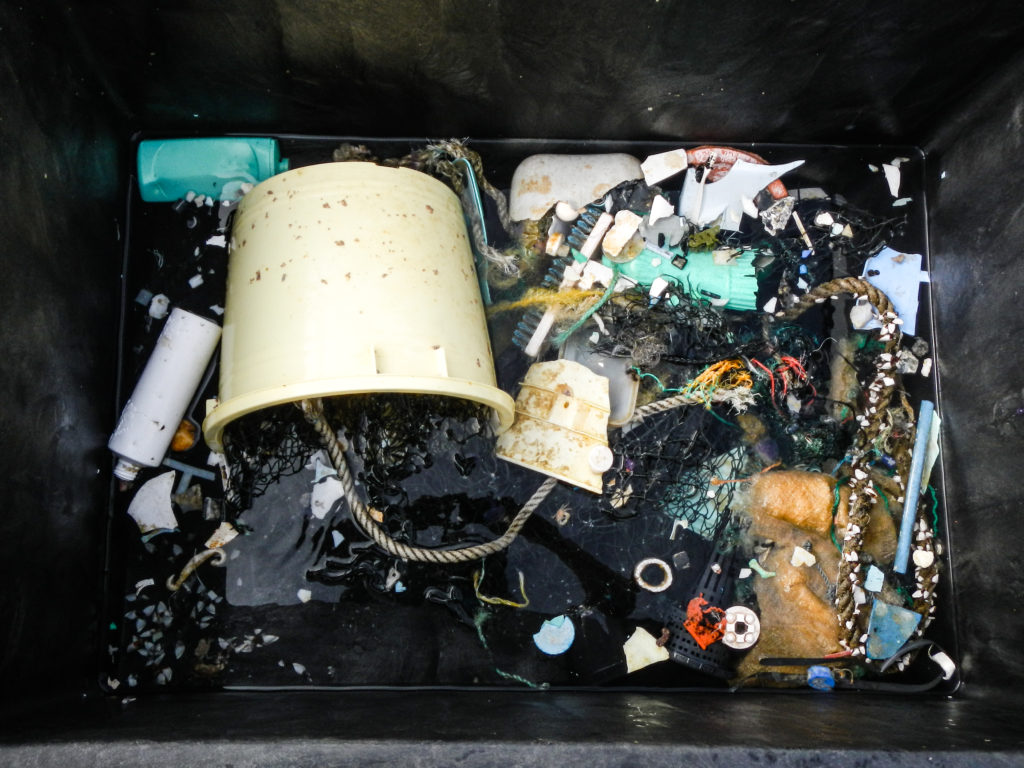 Lonneke Holierhoek, The Ocean Cleanup’s chief operating officer, said their goal is to collect the relatively large floating plastic objects before they break down into smaller, less buoyant and more elusive microplastics.

This summer, the organization reported 92 percent of the plastic in the Great Pacific Garbage Patch is larger than a centimeter, which should be “big enough to be able to collect,” Holierhoek said. They aim to reduce these patches of large plastic by 50 percent in five years, she added.

Once collected, the plastic will be extracted from the water with nets and brought back to shore by boat. The Ocean Cleanup hopes the trash will be recycled, though they don’t know exactly what materials will be recovered or which waste management systems will be able to process it.

Why this cleanup technique worries researchers

In 2015, marine biologist Andrew Thaler raised concerns that the huge booms could attract or harm ocean-going animals. Earlier this year, shark researcher David Shiffman polled some fellow scientists about their concerns, and found that few believed the cleanup would solve more problems than it would cause.

When oceanographers Kim Martini and Miriam Goldstein reviewed a previous version of the system in 2014, they criticized the design’s resilience against ocean forces. Martini and Goldstein claimed the system carried a potential for failure in the storms that frequently roil the Pacific Ocean.

“I don’t think this is the big idea that’s going to help us solve the marine trash problem.”

Others said that regardless of the system’s ability to safely collect trash from the ocean’s surface, it misses the real problems behind oceanic plastic.

Studies estimate that 60 to 70 percent of ocean plastic eventually sinks to the seafloor, far from a floating collection boom. Plastic trash has even been found in the Marianas Trench, the most remote and deepest part of the Pacific Ocean.

“I don’t think this is the big idea that’s going to help us solve the marine trash problem,” said Jerry Schubel, president and CEO of the Long Beach Aquarium of the Pacific.

That’s because collecting the plastic already littering the ocean won’t stem the flow of new garbage. The Ocean Cleanup intends to remove half of the Great Pacific Garbage Patch in five years, which amounts to about 45,000 tons of floating plastic.

But the math isn’t in their favor; more than 8 million tons of plastic enter the oceans each year from the land. 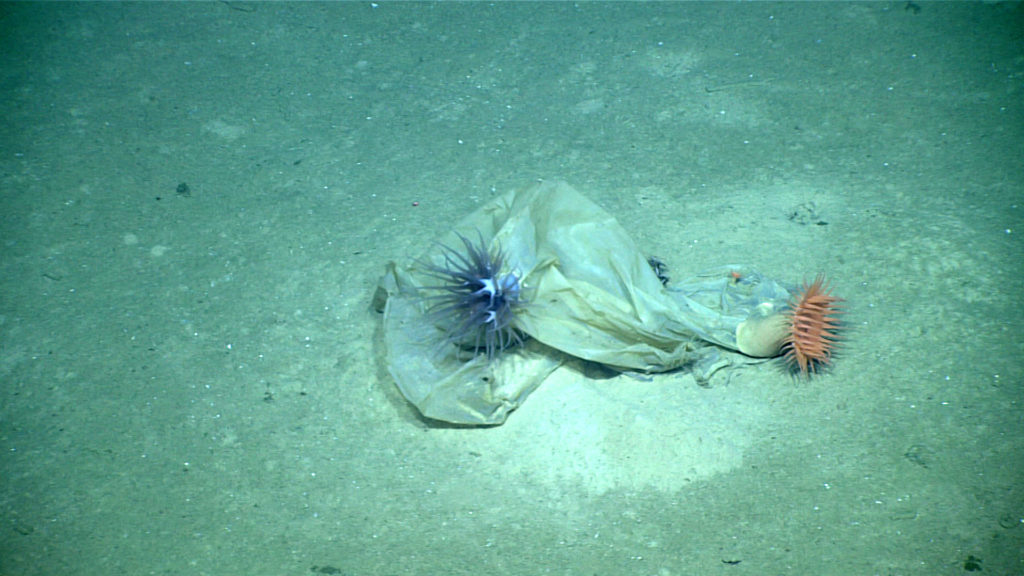 At the bottom of the remote Mariana Trench, a NOAA expedition encountered a plastic bag covered in anemones. Image by NOAA/Okeanos

“I’d much prefer to see them take these devices and put them near the mouth of rivers in Asia,” Schubel said.

Eighty percent of ocean-bound plastics are estimated to originate from Asia, because of the continent’s dense populations, manufacturing industries and overwhelmed waste management systems.

“If we want to solve the problem,” according to Schubel, “we should go to the places that are major contributors to the problem.”

The Ocean Cleanup does not claim to be the sole solution to oceanic plastic pollution. “Yes, we need to prevent more plastic arriving in the ocean,” Holierhoek said. “But even if we did that today, we don’t want what’s out there to stay for hundreds of years. We still need to clean it up.”

In response to many of its criticisms, The Ocean Cleanup said it has employed engineers to modify and strengthen the designs and worked with biologists to address concerns about potential harm. 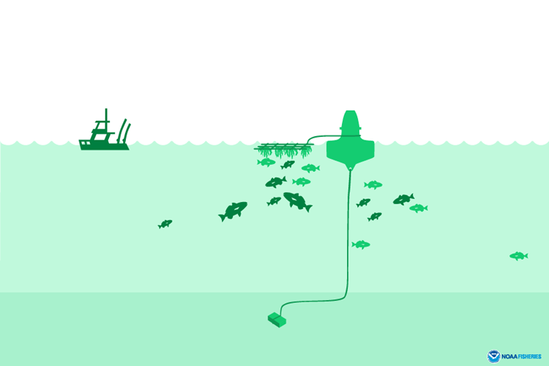 Fish-attracting devices can be anything from floating logs to specially-constructed buoys that draw in fish looking for food or shelter. Graphic by NOAA

“When I heard about The Ocean Cleanup, I thought it was likely to have issues similar to the ones fishermen have,” said David Die, a fishery ecologist from the University of Miami. Objects floating out in the ocean can become “fish-attracting devices” by accumulating algae and attracting small fish looking for shelter.

In the Great Pacific Garbage Patch, those small fish draw larger fish, like tuna and billfish — a dynamic that could disrupt migration patterns and breeding behavior or expose fish to increased fishing.

“I think that clearly the project was originally in the brain of an engineer” rather than a biologist, Die said. “But to their credit, they have listened to me.”

Briana Gibbs, one of Die’s students who has been funded by The Ocean Cleanup, will be installing acoustic sensors to determine if fish and other animals gather under the new floating shelter provided by the boom.

But they might not encounter many fish anyway, according to Die. The area where the device will be deployed is one of the least lively parts of the Pacific Ocean. There isn’t much food for oceangoing animals, due to a low current, small amounts of nutrients mixing from the ocean floor to the surface and fewer plankton.

Timelapse drone shot of System 001 during one of the re-orientation tests. If it performs well for the remaining tests, we will have another checklist item completed. pic.twitter.com/u630jEX2KZ

Although some turtles may be found in the area of interest, “it’s not a hot spot, so the device is unlikely to have a drastic impact on turtle populations,” said Scott Benson, a marine ecologist who studies endangered leatherback sea turtles with the National Oceanic and Atmospheric Administration. Benson has been involved in training members of The Ocean Cleanup personnel in turtle rescue.

Besides, Benson wrote in an email, “the area is seldom visited by anybody, and we don’t have the resources to access or monitor that area.”

It could then offer an added boon for researchers, Benson said: “The Ocean Cleanup has the potential to provide access to data we don’t have and wouldn’t be able to obtain otherwise.”

Expected to reach its destination in the garbage patch this month, the team’s prototype has been dubbed “Wilson,” after the volleyball that kept Tom Hanks company in the movie “Castaway.”

Why your recyclables might have no place to go