A sea urchin army is mowing down California’s kelp forests — but why?

Kelp forests are the marine mirror images to the towering redwoods onshore, the scaffolding that supports the image of the classic northern California coastline.

But these oceanic forests are currently under siege from a potent mix of climate anomalies, disease, and predation that have led to declines in kelp forests not seen in decades.

In their place, vast “urchin barrens” of bare rock picked clean by roving grazers. These sunken equivalents of forest clear-cuts gut the complex relationships that sustain a healthy ecosystem.

Rise of the Urchins

“This year, for example, there was virtually minimal kelp,” she says. “The barrens were barren — just urchins.”

McHugh attributes this increase to elevated recruitment during years in which sea urchin larvae settled out of the plankton in high densities and survived the tumultuous early years of adolescence. Urchins have become so numerous that they have since spawned several citizen science projects aimed at curtailing their numbers. 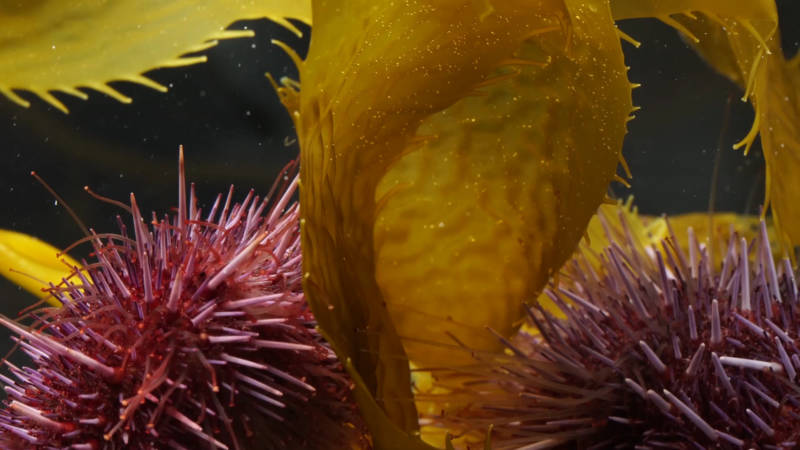 Traditionally, California’s iconic sea otter has stepped in to keep urchin populations in check. Otters feed on sea urchins, which in turn keeps them from overgrazing on kelp. Without otters, the implication is that we would cease to have kelp forests at all.

So what happens when otters forget just what is on the menu?

In the same way that you can eat many things but might prefer to eat pizza, otters are known to be generalists in their diets. But individuals have specific preferences which are passed from mother to pup.

James Watanabe is a lecturer at Hopkins Marine Station, and he was the first to suggest that otters may have developed a “cultural memory loss.”

“From the big pulse of recruitment in the ’70’s, up until now, when the urchins started showing up again, there were three generations of otters with some sea urchins present,” he says, “but not enough for any otter to focus on as the main part of the diet.”

“It’s possible that the behavior died out if everyone who remembered how to do it has died,” adds Aimee Dunlap, who studies animal cognition at the University of Missouri. “When they reintroduced the California Condor,” she recalls, “they had to haul out carcasses, because they’d had a gap in the parents teaching the young how to be a Condor.”

Watanabe points to the example of Kelletia, a large predatory snail that moved north into kelp forests during the 1977-1978 El Niño, as a historical example of a time when otters exhibited similar behaviors.

“It’s a big, meaty snail, and it has a big shell, and it got to the point where you could put your hand down anywhere in the kelp beds and one would be within a meter of your hand. But the otters weren’t going for them.”

Eventually, he began to notice changes beneath the waves. “Within a period of about six months, the abundance dropped and there were a bunch of busted shells all over the place. It’s the damage that only an otter could typically do.”

Can We Really Blame the Otters?

But Joe Tomoleoni, an otter biologist with the U.S. Geological Survey, bristles at the idea of blaming the urchin boom solely on otters, arguing that it ignores the inherent complexity of kelp forests.

“It’s not that the sea otters aren’t doing their job,” he says. “They’re doing it very well, there’s just much more to the story than otters and urchins.”
Tomoleoni stresses that urchins have always been a major prey item for sea otters in California, and in fact, recent observations show more urchins being consumed now than in the past.

Despite their importance, otter indifference would not be enough to explain what’s happening here. Michael Jacox, a Research Oceanographer with NOAA, points to a series of weather anomalies that have affected the Bay Area over the last five years.

It started with a persistent high pressure system which formed over the Pacific Ocean in late 2013. While winters in California are generally characterized as wet and mild, Jacox recalls how “the ridge deflected storms, and we weren’t getting storms or mixing and there was a heat buildup in the surface of the ocean.” This heat buildup, coupled with the extremely strong El Niño of 2015, ultimately impacted the entire US west coast.

And it had serious implications for marine ecosystems.

Kelp in particular was hit especially hard by these warm conditions. “The story for kelp might be similar to how it is for phytoplankton,” Jacox suggests, “They need nutrients in the water, and they prefer cooler conditions. In phytoplankton, we saw really low productivity as a direct result.”

Watanabe suspects it may also have helped drive the urchin boom. To him, the warm water weakened kelp, but failed to kill it.

“The kelp wasn’t very happy here during the warm water buildup,” he recalls, “but we didn’t see wholesale loss of the canopy like we’re seeing now with overgrazing.”

While many researchers spoke to the unprecedented magnitude and persistence of these climate events, they were equally quick to point to signs that the kelp beds may already be recovering. Or at the very least, that they are optimistic the damage can be reversed.

Despite his theory, Watanabe always stressed that it was only a matter of time.

“Those otters are so smart,” he says with a smile. “Once they figure out they can eat those urchins, I’m sure the otters will knock them back real quick and the kelp will recover.”

“This year, up on the north coast, we’ve seen cold water showing up,” adds McHugh. “We’ve seen high trade winds and we’ve seen upwelling…maybe our ecosystem is going to have a chance to recover.”

Left: View of the coastline, the Pacific Ocean and a kelp forest north of the Point Sur Lighthouse near Big Sur, California, on September 17, 2013. Photo by Michael Fiala/Reuters