Affordable water may soon dry up, especially if you live here

Researchers at Michigan State University predict this figure will rise by $49 over the next five years. And if it does, water may become unaffordable for one-third of American households, according to a study, published recently in PLOS ONE, that maps the U.S. areas due to be hit hardest based on local incomes.

“The project deals with looking at the economic impacts of rising water prices on both households and regional economies,” said Elizabeth Mack, an MSU geographer who led the work. When she first pitched the research idea to her colleagues, some scoffed. While water unaffordability is common overseas, Mack said, most assume Americans have the resources and the willingness to do whatever it takes to pay for water.

But rising water prices are quickly eroding this line of reasoning, according to the investigation conducted by Mack and her colleague Sarah Wrase. Two years ago, a survey of 30 major U.S. cities found water bills rose by 41 percent between 2010 and 2015. This dilemma is well-documented in Detroit, where 50,000 households have lost water access since 2014, or in Philadelphia, where 40 percent of the city’s 227,000 water bills are past due.

Mack took these reports and multiple others to expose how pocketbooks could be affected by escalating water prices on a national level. To do so, she peered into an American Water Works Association survey of water utilities across the U.S. in order to determine the annual water bill for an average consumer. The analysis settled on a bill of $120 for nation’s average monthly consumption of 12,000 gallons in 2014, which is based on figures from the U.S. Environmental Protection Agency.

The EPA also provides an estimate for how much Americans can afford to spend on water and wastewater services. If water prices rise above 4.5 percent of a household’s income, then “that means you’re going to have to take expenditures from other portions of your budget and allocate them to water,” Mack said.

To meet this affordability benchmark, a household must earn at least $32,000 per year, according to Mack and Wrase’s assessment. Based on their numbers, nearly 14 million American households — 11.9 percent — couldn’t afford water in 2014. If water prices continue to rise at the same rate (41 percent over five years), then a third of American households — 40 million — may lose access to affordable water, they found.

The team examined median income data for individual areas in the U.S. to chart a map of the communities most at-risk for water poverty. 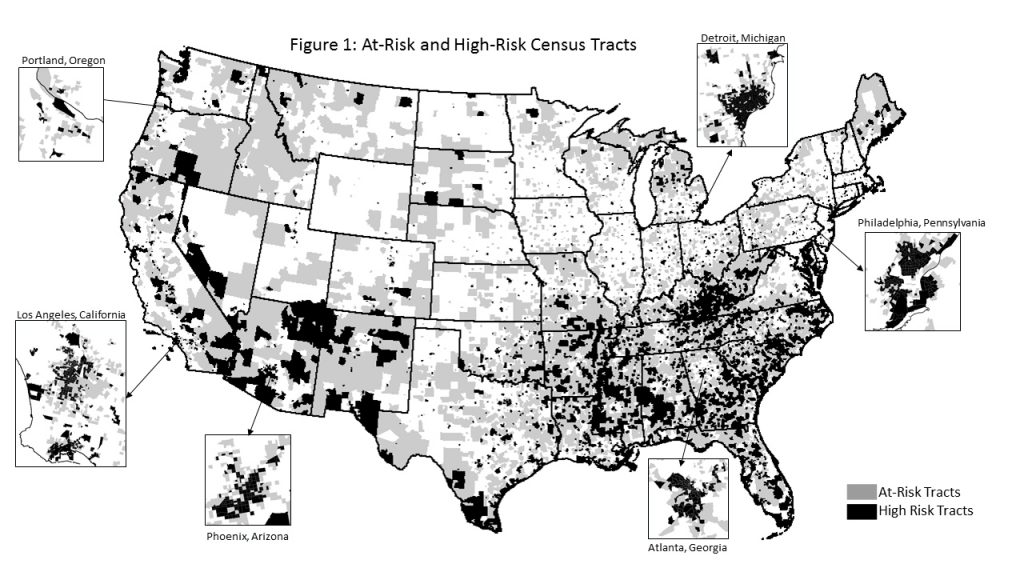 Counties (census tracts) with a high-risk (black) or at-risk (grey) of losing water access due to affordability. High-risk is defined as areas with a median income below $32,000, which are likely to face affordability challenges based on current water rates. At-risk communities have median incomes of $32,000 and $45,120. Image by Mack EA and Wrase S, 2017, PLoS ONE

The South, urban centers and low-income communities carry the most risk. For instance, 81 percent of high-risk and 63 percent of at-risk communities are concentrated in urban areas. Mississippi, Louisiana and Alabama topped the list with the largest numbers of county subdivisions — or census tracts — facing a high-risk of future water poverty. Many of the at-risk areas also have higher rates of disability, food stamp usage, unemployment and black and Hispanic residents, according to the study.

“Some regions are affected more than others in regards to rising water prices, but it’s unlikely that there are any regions that won’t see increases,” said Justin Mattingly, a research manager at the Water Environment & Reuse Foundation, who wasn’t involved in the study. “Aging infrastructure is a problem for everybody, and water scarcity is becoming a bigger problem in many regions as well. There have been years of disinvestment for water infrastructure, and it’s starting to come back to us now.”

Much of the nation’s water infrastructure dates back to World War II, if not earlier. Washington, D.C. still runs water through wooden pipes from the mid-1800s. On Tuesday, Senate democrats unveiled a $1 trillion infrastructure plan that would allocate $110 billion to water and sewer rehabilitation. But water policy agencies predict a total overhaul of America’s water would itself cost $1 trillion. Tack on another $36 billion to adjust for drought, seawater intrusion into aquifers, flooding and other climate change-based shifts to water systems.

Most of the time, water pipes are installed by housing developers, said Theresa Connor of the One Water Solutions Institute at Colorado State University. But water utilities take over the costs of upkeep once they start serving a new neighborhood.

“Although the major cost is the pipes, you also have to keep your plants up-to-date. If there are any new regulations, you might have to do improvements of the pipes and plants,” said Connor, who wasn’t involved in the study.

Infrastructure replacement is the primary driver of the water price surge in America, Connor said. In Atlanta, which spends more on water than any other state, there was a regulatory initiative to prevent stormwater from discharging into wastewater. The move prevented raw sewage from mixing into the streams used for drinking water. But this regulatory decision plus the privatization of water services bumped Atlanta’s water bills to $325 per month on average.

Recent water regulations — like the Drinking Water Protection Act — have forced some water utilities to update their systems to protect from emerging contaminants like agricultural nutrients. But both Connor and Mattingly said those costs are small relative to the spending needed to address aging infrastructure. “At the end of the day, it’s still aging infrastructure that’s driving much of the rise in water rates,” Mattingly said.

Urban flight is another factor in rising water prices. As populations decline in places like Detroit, water utilities are forced to spread their expenses across fewer people, which boosts rates. Meanwhile, cities like Phoenix and Las Vegas have low prices due to human growth.

“Many utilities are looking at alternative billing structures to take some of the burden off low-income households,” Mattingly said. One tactic involves higher charges for those who use more water, rather than a flat fee for everyone.

Both Mattingly and Connor said Mack’s study is a solid first step in understanding water poverty, but noted that its resolution is limited given the data are based on a small portion of America’s 155,000 or so water systems.

“This reality underlies the problem of a lack of available data on water usage and other metrics in the United States,” Mattingly said. “Without proper data, decision making at the local and national level can be hindered.”

Billing rates can vary dramatically between water providers, even within a single city. In the future, Mack hopes to apply the same analysis on individual cities to offer more guidance on water affordability.

As Flint, Michigan and other cities with water catastrophes have proven, the stakes for water infrastructure improvements are high. Delays can expose citizens to health hazards.

“While Flint has certainly garnered the most attention for its water infrastructure problems – and with good reason – they are certainly not alone,” Mattingly said.

Editor’s note: Due to an error in the study, an earlier version of this post had the close-up section of the Detroit water map oriented incorrectly.

Left: Water may become unaffordable for a third of American households within the next five years. Photo by Enid Martindale/via Flickr