Amazon forayed into the brick and mortar grocery industry Monday by testing its first convenience store, Amazon Go. But the high-tech, small-scale market could drastically change the way people shop and eventually eliminate the need for millions of workers, industry experts predict.

The first Amazon Go location is situated in Seattle and is only available to Amazon employees until early 2017. It looks like a typical small grocery store with one thing missing–cashiers.

Amazon Go has no cash registers and no lines because customers do not have to check out. Instead, they check into the store using an Amazon Go app on their smartphones. Sensors placed around the store detect what customers take off the shelves, and the company automatically charges their established Amazon accounts when they leave. It’s like shoplifting, except you pay for stuff as you walk out of the store.

Amazon said it aimed to “push the boundaries of computer vision and machine learning to create a store where customers could simply take what they want and go.” The company has not disclosed the details of its proprietary technology, but experts in the field say it builds on past developments.

“The application is new,” Wolfgang Lehmacher, director of supply chain and transport industries at the World Economic Forum, told NewsHour. “The technology is the continuation of what has happened in recent years.”

Amazon first entered the food market with Amazon Fresh, a delivery food service launched in 2007 in Seattle, but that project’s potential was limited. According to Kantar Retail, online purchases make up only one percent of the $674 billion market for edible groceries.

The 1,800 square-foot Amazon Go store taps into a different and possibly more lucrative market. Convenience stores serve 160 million customers per day and earn $575 billion in sales annually, according to the National Association of Convenience Stores. 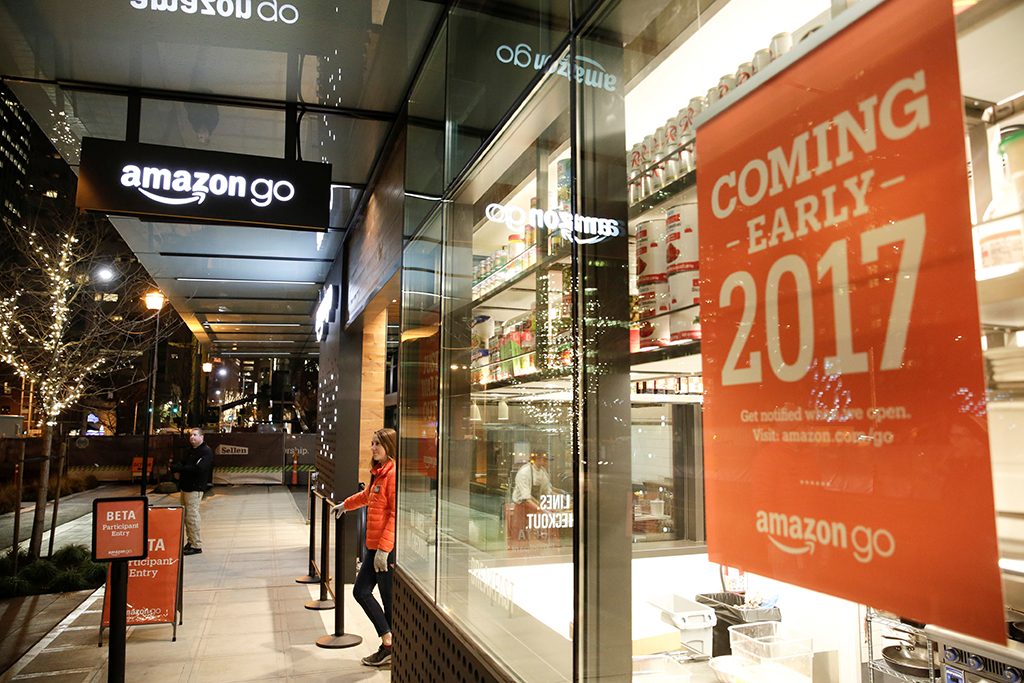 An Amazon employee is pictured outside the Amazon Go brick-and-mortar grocery store without lines or checkout counters, in Seattle Washington, U.S. December 5, 2016. Photo by Jason Redmond/REUTERS

If successful, Lehmacher indicates the technology could be applied to countless other stores, which employed 3.5 million cashiers in the U.S. last year, according to the Bureau of Labor Statistics.

Tom Davenport, professor of information technology at Babson College, warns employees will have adapt if they want to stay relevant.

“If you’re willing to learn something about how the technology works and can either fix it or try to improve it, I think there will still be a job for you,” Davenport said. “But if you’re wedded to the traditional point of sale grocery role, I think your future is quite limited.”

Future jobs might shift to consumer-focused areas, such as managing cybersecurity threats for the new technology and fixing system glitches.

“It’s not that this will revolutionize the world tomorrow,” Lehmacher said, but, he said, it is something customers and workers will need to start preparing for today.

Left: The sign for the Amazon Go brick-and-mortar grocery store without lines or checkout counters, is pictured in Seattle Washington, U.S. December 5, 2016. Photo by Jason Redmond/REUTERS