A new study published today in Nature Communications presents these rare specimens to the world — the first amber fossils to offer a picture of how feathers and hair follicles layered on the skeletons of Cretaceous birds. 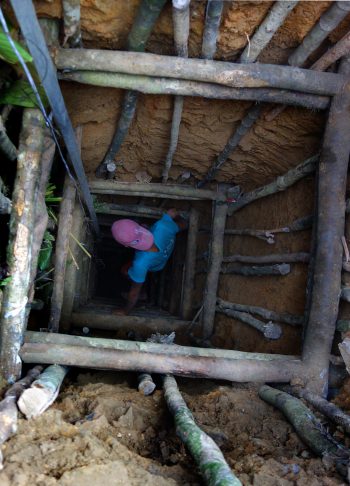 A young man going into the amber mine in Myanmar. Photo by Mo Li

“The little feather follicles show the position where the feathers attached to the wings,” said Ryan McKellar, study co-leader and curator of invertebrate paleontology at the Royal Saskatchewan Museum in Canada. “The pattern and distribution [of feathers] on the wings are almost indistinguishable from modern bird feathers.”

These details are typically lost in the most common form of feather preservation — compression fossils buried in sedimentary rock. Amber carried the extra bonus of preserving microscopic details. These two juvenile birds possessed little hooklets on their feathers.

“The hooklets zipped the feathers together to make veined flight feathers,” McKellar said.

McKellar joined this project in late 2015, soon after Lida Xing of the China University of Geoscience unearthed the two specimens inside an amber mine in northeastern Myanmar. At their time of death, the two birds were about the size of hummingbirds, but they might have grown bigger as adults.

X-ray scans confirmed that the two juvenile birds belonged to a group known as enantiornithines, which McKellar described as “sort of weird.” This group of extinct birds had teeth, along with clawed fingers on each wing. Their tail feathers didn’t spread into a standard fin, as seen with modern birds, but instead split into two long ribbons. 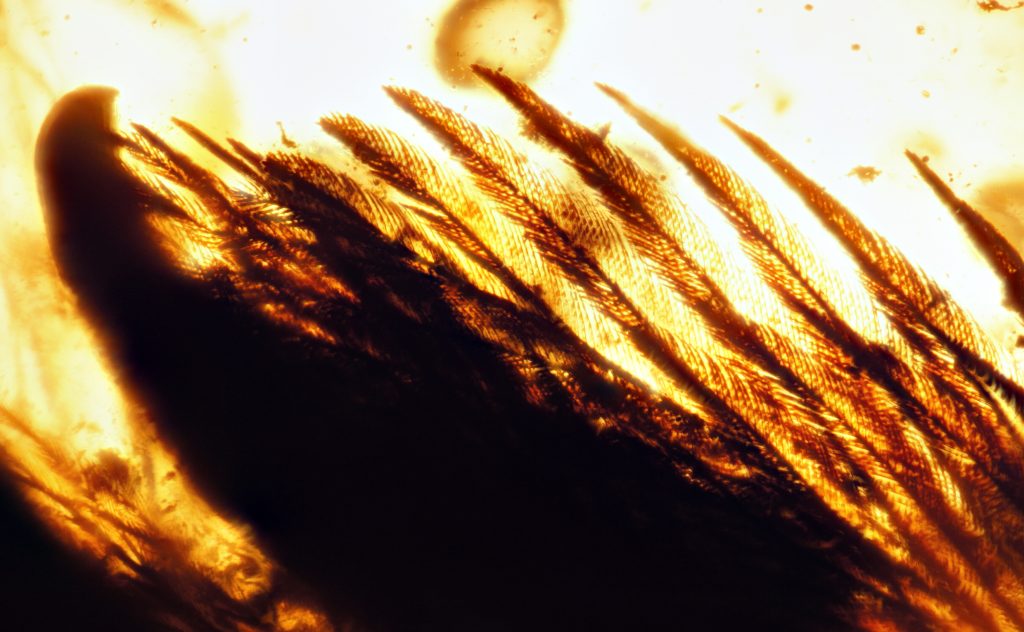 “Angel wing” — one of two amber fossils found in Myanmar — under a compound microscope, showing pigment banding in feather barbules, and the outline of the claw. Photo by Royal Saskatchewan Museum/R.C. McKellar

The two fossils offer insights into the color and composition of juvenile plumage. The upper surface of the wing was painted chocolate or walnut brown, with at least one pale spot. Another pale band trailed behind it. Flip the wing over, and the plumage was light or very pale. 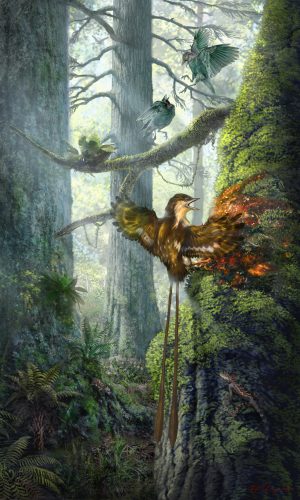 Depiction of enantiornithine partially ensnared by tree resin, based on the “angel wing” specimen. Illustration by Chung-tat Cheung

The hatchlings also seemed to lack a downy stage. Rather than be born as little balls of fluff, the young birds had feathers comparable to modern adult birds.

“These specimens came out equipped to deal with life already,” McKellar said. “They have a full set of what look like flight feathers. Based on compression fossils, we know that this happens even in embryos for the particular group of birds.”

The rare fossilized wings now rest at the Dexu Institute of Palaeontology in China, where Xing’s team looks after them and provides access to other interested researchers.

“The Cretaceous fossil record had pointed in this direction [for plumage features],” McKellar said. “It’s just nice to see the finer details and a more concrete example.”