America’s HIV outbreak started in this city, 10 years before anyone noticed

HIV arrived in New York City precisely 10 years before doctors first noticed the disease, a conclusion that’s based on new research published today in Nature. The finding solves a 35-year-old mystery surrounding the origins of America’s outbreak, the first in the world to be noticed by doctors.

It indicates the virus passed from the Caribbean to New York in the early 1970s, where the disease gained a foothold for at least half a decade, before triggering outbreaks in places like San Francisco. The study also clears the name of Gaëtan Dugas, so-called “Patient Zero,” who had been wrongly blamed for bringing the virus to U.S. shores.

“This is the clearest scientific debunking of the myth around ‘Patient Zero,’” said Dr. Anthony Fauci, director of the National Institute of Allergy and Infectious Diseases at the NIH, who wasn’t involved with the new study. “It’s definitely clear that when ‘Patient Zero’ got infected, it was after already spreading throughout.’

New York’s earliest strains most resemble those from the Caribbean, where researchers believe the disease first landed in the Western Hemisphere.

An international team of geneticists, microbiologists and medical historians solved this case through detective work. In 1981, UCLA physician Michael Gottlieb reported the first cases of HIV/AIDS — initially described as an infectious cancer — among gay men living in Los Angeles. But based on what’s now known about HIV, these couldn’t have been the first cases. For instance, research found eventually it takes 10 years, on average, for an infected person to show symptoms.

So Michael Worobey, an evolutionary biologist at the University of Arizona, stepped back into the past. They spent years tracking down blood samples taken prior to 1981 that contain signs of the virus. He and his colleagues stumbled upon two Hepatitis B virus studies from 1978-1979 — one in New York, the other in San Francisco — that had collected blood samples from gay men. Back then, though no one knew it, people with a high-risk of catching Hepatitis B turned out be high-risk for HIV, Worobey said during a press conference on Tuesday.

They whittled 11,000 blood specimens down to a set of 33 New York samples and 83 samples with signs that those patients had mounted an immune response against HIV. But to trace the history of the outbreak, the team needed genetic material, whereupon they encountered a big problem. The archived specimens hadn’t been stored using the best practices for preserving genetic material, leaving major holes in the genetic codes of the HIV virus from each patient. 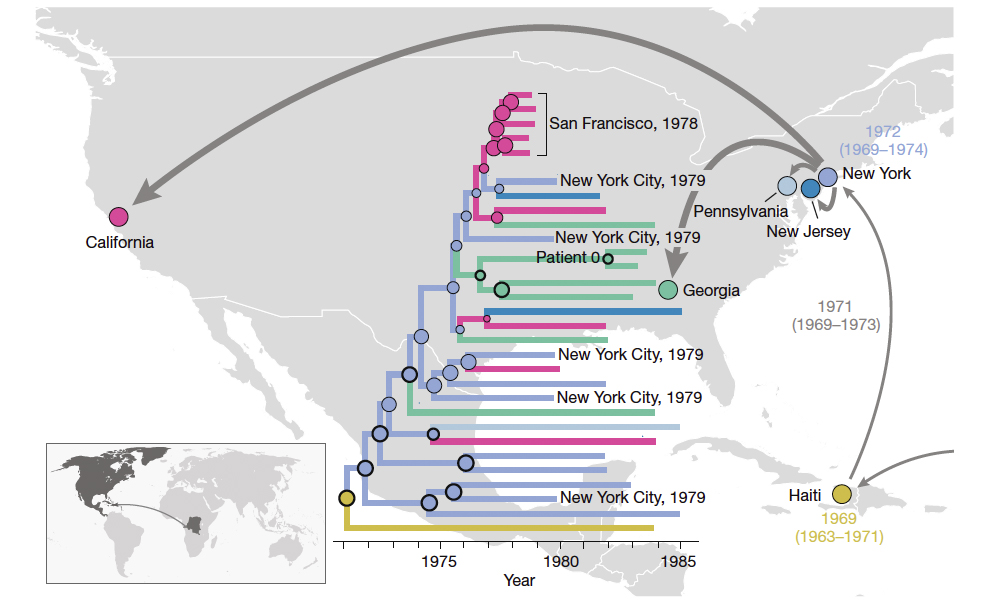 The early patterns of HIV-1 spread in the Americas as outlined in Worobey et al., Nature, 2016. The map summarizes the main patterns of spread inferred from the comparison of HIV genomes collected in different location. The map inset shows the initial introduction of HIV-1 subtype B lineage into the Caribbean from Africa. From there, the virus spreads first to NY and subsequently to different locations in the United States. Photo by Worobey et al., Nature, 2016

Imagine your friend gifts 10 storage bins to you, each with a shredded copy of the Declaration of Independence inside of it. Then your friend grabs one handful of shreds from each bin and says, “Piece together the document, please!” This task is hard even with all the pieces.

To surpass this barrier, the researchers developed a “jackhammer” gene sequencing approach. It amplifies the signal from each cut up piece of genetic code, making it easier to notice the fragments that might overlap. Over the course of years, they found enough overlapping fragments to build the complete genomes of HIV viruses from eight patients — three from San Francisco and five from New York.

“It is true, it’s not a huge number,” Worobey said. “But it tells you a whole lot, if you’re looking at the geographical patterns.”

That’s true thanks to genetic diversity.

Genetic diversity — or different mutations among a set of genomes — can pinpoint when a population arrived in a certain place. Put one person on an deserted island, and the genomic diversity is low and defined just by them. Add a second person, and you’ve doubled the diversity. If you know when the two arrived — and of course you do since you put them there — then you can chart how genetic diversity changed over time. But if you can also work backwards, with just the people — or in this case, different patients’ copy of the HIV — if you know how common mutations are in the genomes.

“This is, in my mind, the last piece of the puzzle.”

Worobey and his colleagues found genetic diversity was higher in the New York samples, suggesting the virus landed there first.

Their analysis traced the bulk of HIV infections in San Francisco to a single introduction from New York by around 1976, before the virus quickly spread across the country.

No blame left to give

Gaëtan Dugas, who died March 30, 1984 due to complications with HIV/AIDS, was mistakenly branded as “patient zero” or the first cases in America’s HIV outbreak. Photo via Wikimedia

“This is, in my mind, the last piece of the puzzle,” said Beatrice Hahn, a virologist at the University of Pennsylvania, who first discovered that HIV originated in chimpanzees and other primates before infecting humans.

“We now have a very detailed understanding where HIV came from, the number of times it got introduced into the human population, the location where that occurred, how the virus then moved around within Africa, and started to spread, and then how the virus was then transferred to other places around the world, including the United States,” she said.

Based on genetic heritage analysis conducted in the new study, New York’s earliest strains most resemble those from the Caribbean, where researchers believe the disease first landed in the Western Hemisphere. But HIV, as we know it, started sometime in the early 20th century in Africa, Worobey said, and it wasn’t a one-time event.

“This pandemic strain that we call the main group of HIV-1 is one of several non-human primate viruses that have crossed over,” Worobey said. “It’s not the only one, it’s just the most successful one.”

He said one of these HIV variants — HIV-1 subtype B — successfully emerged out of Africa, sometime in the mid- to late-1960s, and took hold in the Caribbean by 1967. A Haitian HIV strain from 1969 is the closest relative to those that first dropped into New York, suggesting it may have been the source of America’s outbreak. However, this virus had been circulating among Haiti, Dominican Republic, Jamaica, Trinidad and Tobago and Haitian immigrants, making it difficult to pin to a single Caribbean nation.

“How the virus moved from the Caribbean to the U.S., and New York City in the 1970s is an open question,” Worobey said. “It could have been a person of any nationality.”

Plus, it’s also important to distinguish between tracing the origins of a virus and placing blame, he said, because no one should be blamed for spreading a virus that no one even knew about.

This advice could also apply to Gaëtan Dugas. Dugas was a flight attendant for Air Canada and an early AIDS patient who, in the mid-1980s, the Centers for Disease Control and Prevention linked to a network of HIV transmission between 10 American cities. In the case report on the network, investigators initially labeled Dugas as “Patient O” to indicate he lived “Out(side)-of-California.” However, when disease detectives later transcribed his entry into a separate report, they used “patient 0,” i.e. zero.

“Patient zero” is a term typically used by epidemiologists to denote the first-known case of an outbreak. Popular media, such as the 1987 best-selling book “And The Band Played On” by journalist Randy Shilts, spread this inaccurate information — even going as far as to suggest Dugas brought HIV to America.

“Yes, Randy’s book clearly promoted the idea [of ‘Patient Zero’],” director Fauci said. “And since it was so popular, it became folklore.” 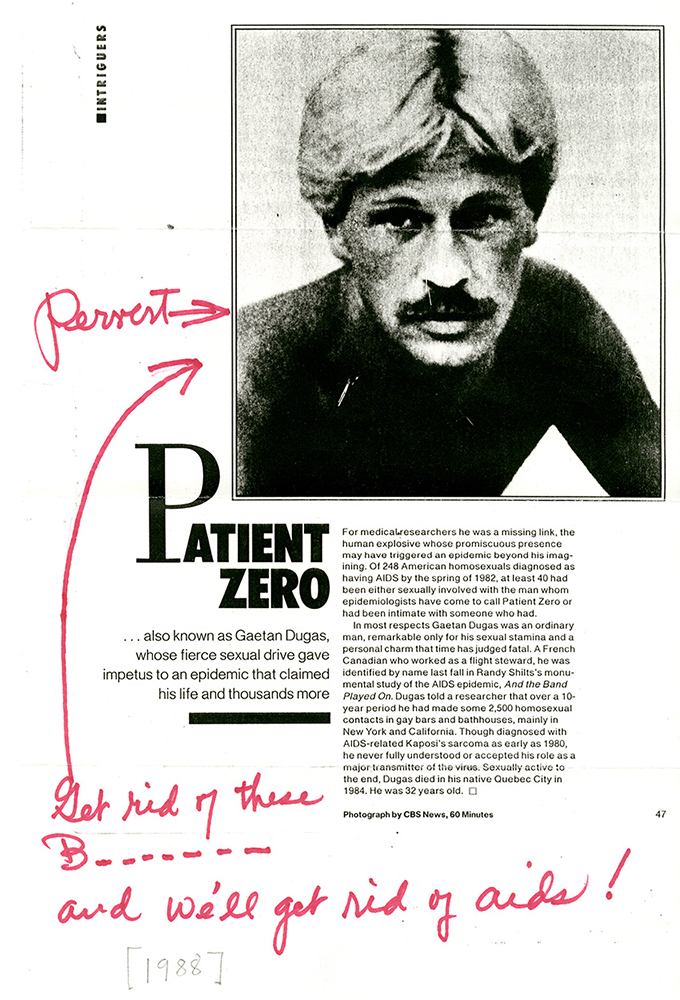 An annotated clipping of a People Magazine article about Gaëtan Dugas sent to San Francisco AIDS Foundation circa 1988. Photo via NIH

Today’s study clears Dugas’ name, once and for all, by comparing his HIV sample with those collected from San Francisco and New York in 1978-1979.

“That’s really a spectacular part of the story. It removes the sense of blame and shame from him [Dugas],” said Paul Volberding, head of the Center for Aids Research at the University of California San Francisco, who saw some of the first HIV patients in America, including Dugas. “Dugas was having sex and spreading the virus. But this study makes the point that a number of the people that he was having sex with were already symptomatic when he first had contact.”

Volberding said the hyperbolic confusion over Dugas is representative of what can happen during the early days of modern outbreaks. The early days of any outbreak are hectic for doctors and public health officials on the best days, and a total garbage fire on the worst. Remember the fervor over Thomas Eric Duncan in Dallas during the Ebola outbreak?

You can’t tell an outbreak is happening until people get sick, so doctors are inherently one step behind. Yet even without the internet, Volberding recalled that the first reports of AIDS in 1981 quickly passed between U.S. physicians’ letters to medical journals, as they recognized the symptoms in their patients.

“The day that I saw my first patient on July 1, 1981, I was making rounds in the hospital with a new trainee, who had just arrived in New York,” Volberding said. “He said, ‘I think we saw some of those patients there.’ News spread from New York to San Francisco kind of instantaneously.”

Volberding wrapped up by explaining that studies like Worobey’s are a marker of the future, because they pair epidemiology with new-age technology to solve outbreaks.