Analysis: Robots have achieved what humans never will — assembling an IKEA chair in less than 21 minutes

Artificial intelligence has mastered something that humankind has failed at, repeatedly. An autonomous robot, designed by mechanical engineers in Singapore, can now assemble an IKEA chair from scratch without a manual in less than 21 minutes.

Such a feat has been described as the “equivalent of the moon landings for robotics” because the skills required are straightforward but immensely complex. Damn those wooden dowels!

And it illustrates the tremendous distance that automated systems robots have traveled in a short period time. The study was published Wednesday in Science Robotics.

What the scientists did: Other engineers had built IKEAbots in the past, but those machines required custom-made mechanical hands to hold and twist furniture parts into place.

But Francisco Suárez-Ruiz, Xian Zhou and Quang-Cuong Pham — three engineers at the Nanyang Technological University in Singapore — wondered if the task could be accomplished with off-the-shelf hardware and software available on open-access libraries on the internet. 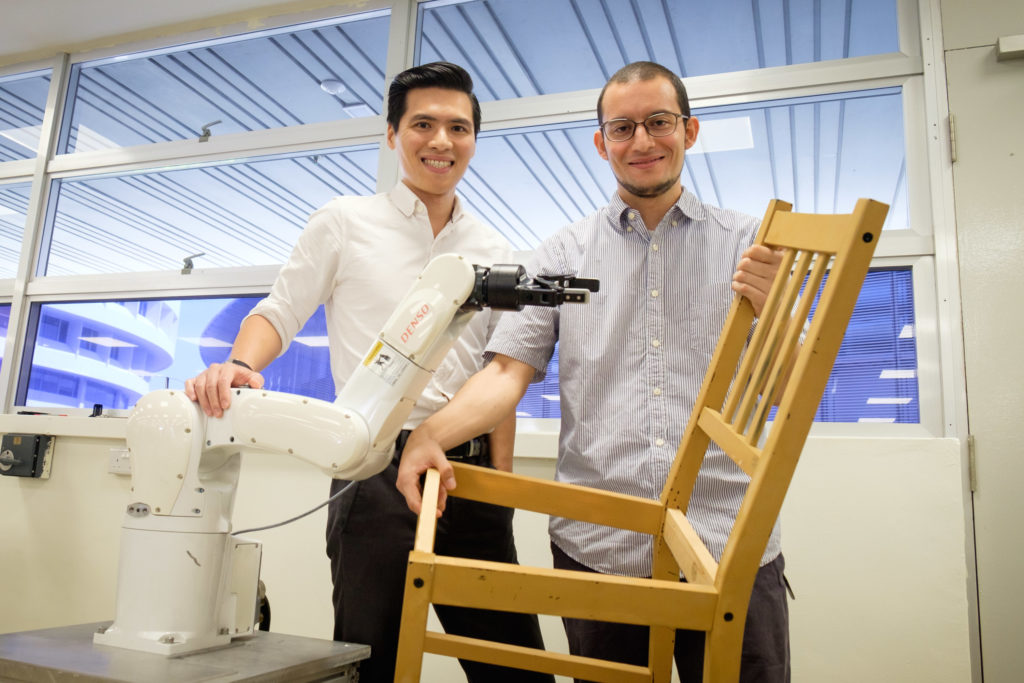 So, the trio acquired a couple of industrial robot arms with gripper claws (like the ones in arcade games), a camera with 3-D vision and force sensors. The goal: Assemble a STEFAN chair from the local IKEA store.

The robot accomplished its mission in three stages: mapping, motion planning and execution. First, the 3-D-camera snapped photos of the workspace, and then an algorithm scanned through a library of 3-D objects to identify the individual parts of the chair. Next, the AI system considered its plan of attack, figuring out how to efficiently move the robot arms without breaking the pieces. Finally, the robot arms got to work.

Why building an IKEA chair is so hard: One of the most challenging stages for the robot, as you may know from experience, is putting the wood dowels into the individual chair pieces. It requires precise vision — the holes are less than 20 millimeters wide — but also an appropriate amount of pressure.

Here is where the force sensors, attached to the robot wrists, come in.

The camera spots the locations of the holes in the chair’s frame. After picking up a dowel, the robot claw lowers the dowel’s tip near the edge of a hole. Then, the force sensors detect when the peg hits the frame. The contact creates a noticeable change in pressure, which feeds back into the robot’s mainframe.

The robot arm then slides the peg around against the frame, until the pressure drops, indicating the peg has found an open space.

In some instances, at this stage, the robot would slide the peg off the frame, dropping it into the abyss. But the robot ultimately persevered, slotting home the pegs.

Another major hurdle is attaching the second side of the chair. For humans, your two arms work together, allowing your left hand to grab, grip and move things at the same time as your right hand. 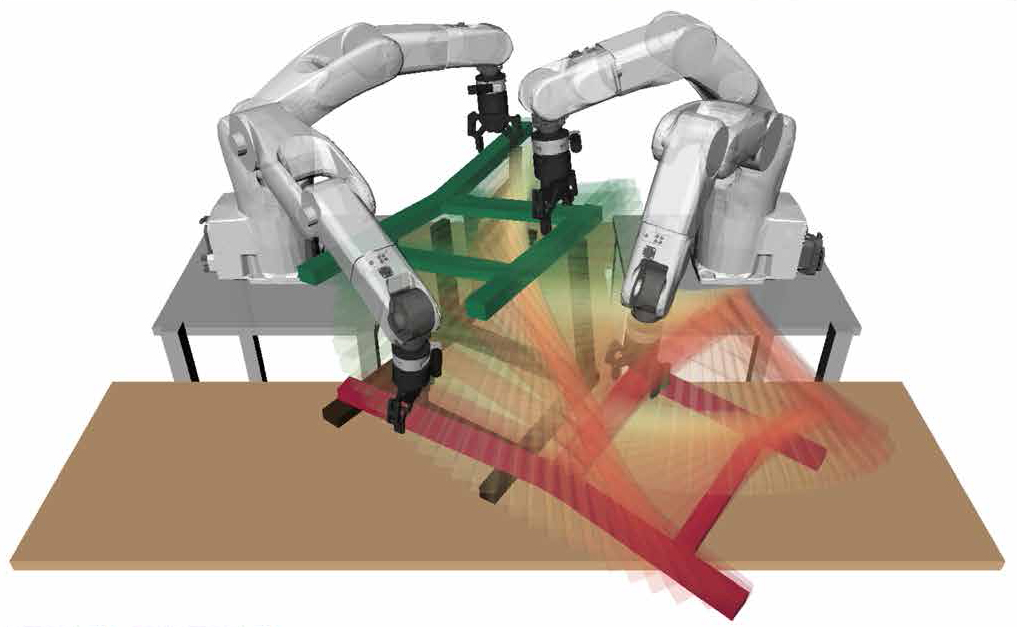 An illustration of how the two robot arms plan a smooth, collision-free
motion in simulation, respecting the constraints of their closed kinematic chains. Image via Suárez-Ruiz, Zhou, Pham, Sci. Robot. 3, eaat6385 (2018)

That’s difficult for two robot arms because of what are known as closed kinematic chains. In essence, the robot arms are independent, and their joints want to move in their own constrained ways. You can try this at home. Find a friend and a chair. Now without talking at all, each of you grab different parts of the chair with one hand. Now, move it across the room. It’s a little awkward, right, because you can’t discuss where to put it or how fast to move it.

To master this ability, the engineers designed robot arms to play follow the leader. The mainframe charted the path needed to keep the two arms from bumping the side of the chair into the rest of frame. Then, one arm would take the lead, forcing the second arm to comply to its movements.

Take it from someone who once assembled a giant IKEA bookshelf by himself…but backwards, this robotic achievement should not be understated. This type of automation typically requires a robot for each task — pick up dowel, plug a dowel, move the side of the chair, attach the side of the chair.

Creating an autonomous robot that can plan and control its movements takes considerable engineering prowess, which may explain why this project to build a simple chair took around three years. This team did the deed through some nifty computer engineering and open-access software. Other groups are using human-machine mind melds to teach dexterity to robots and solve real-world problems.

But if you could teach such a system to read a manual or follow the commands of a supervisor, then it could significantly cut down the manufacturing time for electronics, aircrafts or any product that requires grabbing and putting complex pieces together.

Left: This new robot, built from off-the-shelf parts and programmed with open-access software, can autonomously assemble an IKEA chair -- an odd but significant milestone in artificial intelligence and robotics. Video by NTU Singapore