The year was 1961. A barite mining operation at the Jebel Irhoud massif in Morocco, some 100 kilometers west of Marrakech, turned up a fossil human skull. Subsequent excavation uncovered more bones from other individuals, along with animal remains and stone tools. Scientists’ best guess was that the remains were about 40,000 years old and represented African versions of Neandertals. In the decades that followed, researchers shifted their stance on the identity of the remains, coming to see them as members of our own species, Homo sapiens—and they redated the site to roughly 160,000 years ago. Still, the Jebel Irhoud fossils remained something of a mystery, because in some respects they looked more primitive than older H. sapiens fossils.

Now new evidence is rewriting the story of Jebel Irhoud once again. A team led by Jean-Jacques Hublin of Max Planck Institute for Evolutionary Anthropology in Germany has recovered more human fossils and more stone tools, along with compelling evidence the site is double the age experts previously believed it to be. The researchers describe their findings in papers published this week in Nature.

If the fossils do in fact represent H. sapiens, as the team argues, the finds push back the origin of our species by more than 100,000 years and challenge leading ideas about where and how our lineage evolved. But other scientists disagree about what, exactly, the new findings mean. In a way, far from tidily solving the puzzle of our origins, the Jebel Irhoud discoveries add to mounting evidence that the dawning of our kind was a very complicated affair.

Experts have long recognized that H. sapiens got its start in Africa. Up to this point, the oldest commonly accepted traces of our species were in Ethiopia: 195,000-year-old remains from the site of Omo Kibish and 160,000-year-old fossils from Herto. Yet hints that our species might have deeper roots had come to light. For instance, a skull with some modern characteristics from Florisbad, South Africa, was dated to 259,000 years ago—but the skull was assigned to a more primitive species, Homo heidelbergensis, and the date was never widely accepted. Clues have also come from studies of DNA recovered from human fossils. In 2016 researchers led by Matthias Meyer, also at Max Planck, reported that they had recovered DNA from fossils at the Spanish site of Sima de los Huesos that indicated H. sapiens split from its closest evolutionary relatives, the Neandertals, more than 500,000 years ago, implying an older fossil record of H. sapiens remained to be discovered.

To that end, Hublin and his colleagues have unearthed fossils of several other individuals from a part of the Jebel Irhoud site that the miners had not disturbed in the 1960s. Their finds included skull and lower jawbones as well as stone tools and the remains of animals the humans hunted. Multiple dating techniques indicate the stratigraphic layer from which the fossils and artifacts were recovered dates to between 350,000 and 280,000 years ago.

Analyzing the sizes and shapes of the Jebel Irhoud bones, the researchers found that the form of the face, lower jaw and teeth was distinct from Neandertals and other archaic humans. In these features the Jebel Irhoud remains resembled H. sapiens. The braincase, however, lacks the round shape characteristic of modern humans and instead has the elongate shape seen in archaic humans. Such differences in braincase shape are associated with differences in brain organization. All things considered, the team concluded the Jebel Irhoud remains represent “the very root of our species, the oldest H. sapiens ever found in Africa or elsewhere,” Hublin said at a press teleconference. The remains reveal a group that did not have all of our hallmark traits yet but whose form could have gradually evolved directly into that seen in people today, he and his colleagues report in their paper describing the fossils. 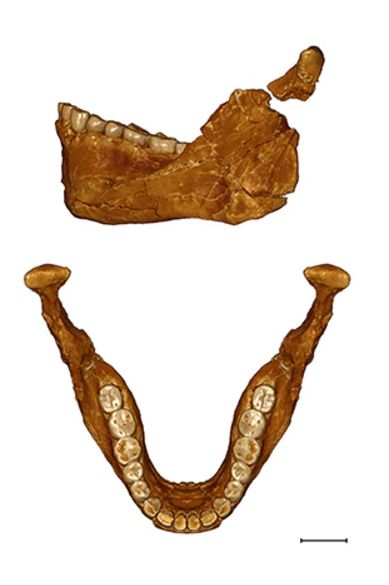 The discovery “allowed us to envision a more complex picture for the emergence of our species, with different parts of the anatomy evolving at different rates,” Hublin said. Some parts, such as the face, attained their modern form early on; others, including the brain, took longer to reach the modern condition. He added that the findings do not imply Morocco was the cradle of modern humankind. Instead, taken together with other fossil discoveries including the Florisbad skull, they suggest the emergence of H. sapiens was a pan-African affair. Hublin said that by 300,000 years ago, early H. sapiens had dispersed across the continent. This dispersal was helped by the fact that Africa was quite different back then—the Sahara was green, not the forbidding desert barrier that it is today.

The Jebel Irhoud discovery coincides with findings from a separate study of ancient DNA made available this week on the bioRxiv preprint server ahead of peer review and publication. Carina Schlebusch and Mattias Jakobsson of Uppsala University in Sweden and their colleagues analyzed seven H. sapiens genomes from South Africa, from people who lived between 2,000 and 300 years ago. The researchers found that the groups to which these individuals belonged diverged more than 260,000 years ago, which would mean our species is at least that old. “The two new papers certainly complement each other,” observes evolutionary geneticist Alan Rogers of the University of Utah, who was not involved in either study. “The Jebel Irhoud paper tells us modern human morphology is older than we had thought. The Schlebusch et al paper says modern human populations have been separate for nearly this long.”

Not everyone is ready to accept the claim that the Jebel Irhoud fossils necessarily belong to H. sapiens, however. Paleoanthropologist John Hawks of the University of Wisconsin–Madison says their modern-looking traits might not actually reflect a connection to our species. He notes the analysis by Hublin and his colleagues did not compare the Jebel Irhoud remains with fossils from Spain dating to more than 800,000 years ago that belong to a species called H. antecessor. “There is an archaic human population with facial morphology that resembles modern humans in many ways, and it is a lot older than Jebel Irhoud,” he says of H. antecessor. “Maybe Jebel Irhoud was evolving into modern humans, but another possibility is that it is retaining facial morphology from an H. antecessor–like population that may have been the last common ancestor of Neandertals and later African archaic humans.”

Indeed the new fossils “raise major questions about what features define our species,” observes paleoanthropologist Marta Lahr of the University of Cambridge in England. “[Is] it the globular skull, with its implications on brain reorganization, that make a fossil Homo sapiens? If so, the Irhoud population are our close cousins.” But if, on the other hand, a small face and the shape of the lower jaw are the key traits, then the Jebel Irhoud find could be one of our actual ancestors—and thus shift the focus of scientists who study modern human origins from sub-Saharan Africa to the Mediterranean—Lahr says.

Either way, the new discoveries seem poised to fan debate over who invented the artifacts of Africa’s Middle Stone Age (MSA) cultural period, which spanned the time between roughly 300,000 and 40,000 years ago. The archaeological record shows that during the MSA early humans across Africa and Eurasia moved away from making clunky handaxes to crafting more portable cutting tools using so-called Levallois methods for shaping stone. Researchers disagree about whether this new technology arose once and spread across the Old World as early humans dispersed or whether different populations invented the technology independently. And because the oldest MSA artifacts predated the oldest known H. sapiens fossils, experts had reason to believe that multiple species made MSA tools. 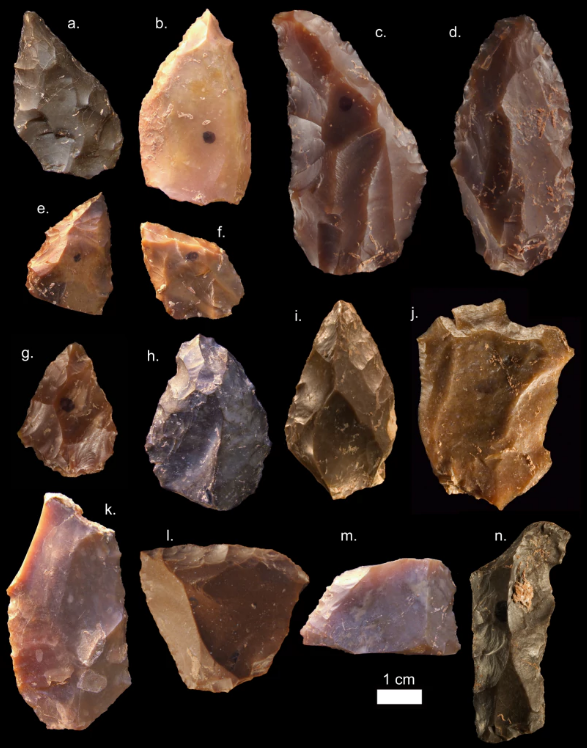 The new findings could change the equation, however. “I don’t believe the MSA is evolving independently all over the place, and the Irhoud date firmly places the earliest MSA within the sapiens lineage (or with sapiens itself depending on how the nomenclature issue settles), rather than before it,” Lahr says.

Other experts are cautious about linking the MSA to a particular species. “We have the potential for other lineages to still be on the landscape,” explains archaeologist Christian Tryon of Harvard University. “I’m hesitant to go straight from archaeology to species, particularly at 300,000 years ago, when [Homo] heidelbergensis and others may still have been running around.” Recently researchers dated fossils of Homo naledi, a small-brained human species whose remains have been found in South Africa, to between 335,000 and 236,000 years ago—meaning it was among the other humans on the scene during the MSA.

“The big story right now in human evolution is that Africa 250,000 years ago was not what we thought it was, and the formation of African modern human populations from that time period was a very complicated process,” Hawks says. “I think that people had this assumption that once you knew modern humans evolved in Africa, that solved everything. That assumption led to the notion that whatever African fossil record there was must be the ancestors of modern humans. It turns out that’s massively oversimplified. There are several different lineages of archaic humans, Homo naledi and others, that genetics is suggesting must have existed. And we don’t know how most of the fossils fit. That’s where Jebel Irhoud is—we now know its age, but we still don’t know how it fits in.”

The new finds “make the picture nicely complicated,” Tryon agrees. “I like a messy story and this contributes to it.” But it also means the scientists chasing the origins of our own species have their work cut out for them. Sometimes the most familiar things are also the most mysterious.

This article is reproduced with permission from Scientific American. It was first published on June 8, 2017. Find the original story here.

Left: Composite reconstruction of 300,000-year-old fossils from the site of Jebel Irhoud in Morocco. Researchers say the fossils are the earliest known remains of Homo sapiens. Image via Philipp Gunz, MPI EVA Leipzig