Construction crews digging in the north end zone Monday found a 4-foot-long femur bone that experts have confirmed came from a mammoth, a prehistoric species that went extinct at least 10,000 years ago.

Further exploration with the help of archaeologists revealed thousands of bone fragments from several extinct mammals including bison and some kind of camel or horse. 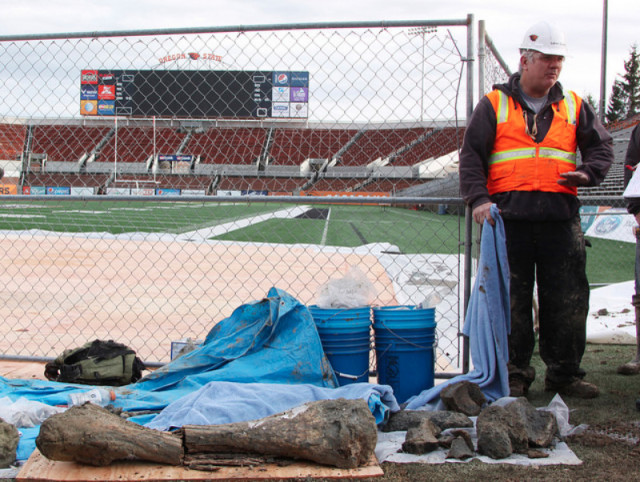 Oregon State University’s Loren Davis was on site after the discovery of mammoth bones under Reser Stadium Monday. Photo by Theresa Hogue

The bones were discovered about 10 feet underground in an area that may once have been a bog or marsh, according to Loren Davis, associate professor of anthropology at OSU.

“Animals who were sick would often go to a body of water and die there, so it’s not unusual to find a group of bones like this,” Davis said. “We had all of these types of animals in the Willamette Valley back then.”

Davis was called to the site after the initial discovery and said some of the bones are “actually quite well-preserved.” He and other researchers have found at least one mammoth tooth and portions of a clavicle in addition to the femur.

They believe they may discover more bones as they continue excavating a large pile of dirt removed from the site. They plan to soak the bones in water to prevent further deterioration and are testing them to determine their exact age. 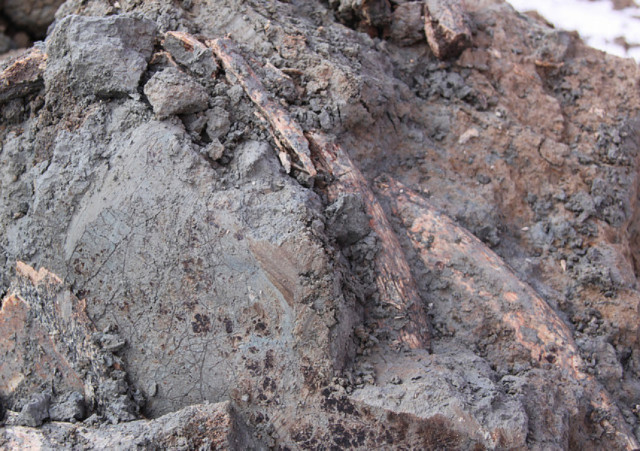 The discovery of mammoth bones is not unusual in the Willamette Valley, according to OSU spokesman Steve Clark. Similar discoveries have been made around Corvallis, Tualatin and Woodburn.

“The Willamette Valley was an area where these animals roamed,” Clark said. “There was a temperate climate and over time they died by natural causes.”

Davis said the animals do not appear to have been killed, and no one has seen any signs of human bones or artifacts at the site. That means the Valley Football Center expansion project can proceed as planned. Without any human artifacts, there are no special rules or regulations requiring the university to preserve or protect the site or the bones. 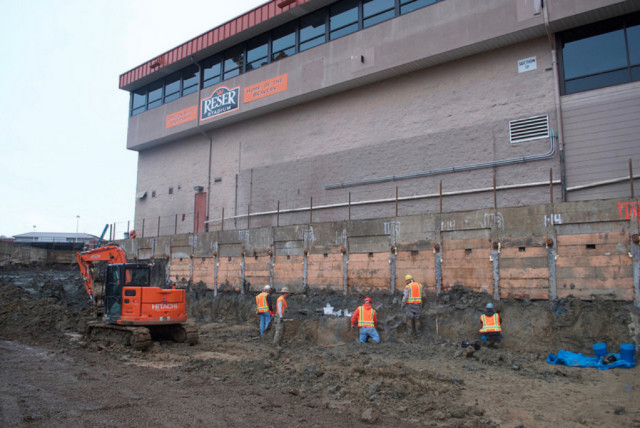 The expansion and renovation project began after the fall football season and is scheduled to wrap up by the start of the 2016 season. While experts at the university remove and examine the bones, construction crews have moved to other areas to continue working.

Eventually, the site where the mammoth bones were found will be locker rooms and meeting spaces for the school’s football players.

Clark said the university would like to display the bones in addition to using them in research and teaching. And, he said, they might even give the Beavers a boost on the field.

“You know a mammoth is strong and would be a heck of a linebacker,” he said. “Our football coach Gary Anderson would love this discovery to be an inspiration and a metaphor for the conviction and the strength and achievement of his football team.”