In a landscape of rolling hills and flat cow fields, Mole Hill Mountain is a peculiar sight. Jutting severely above the west Virginia countryside, it is an outlier; it is Harrisonburg’s sore thumb.

Mole Hill is the remnant of an ancient volcano, and as such, has baffled geologists for decades.

Several times a semester, Liz Johnson, a geochemist and James Madison University professor, packs her geology students into a van and heads west on Route 33 from Harrisonburg, beyond the local youth center and the Miracle Car Wash, and through the Mennonite part of town. As the van rounds a turn, the mountain looms suddenly into view.

Most of the rocks in Virginia’s Valley and Ridge Region are sedimentary, and date back roughly 300 to 540 million years to the early Paleozoic Era. But Mole Hill, which rises 1,895 feet above sea level, is geologically much younger. Radiometric dating shows that it was formed about 48 million years ago, in the Eocene Epoch, a time in which the region was otherwise tectonically quiet. “It may not seem obvious if you don’t know a lot about rocks,” says Callan Bentley, a local geologist and professor at Northern Virginia Community College. “But if you’ve got a whole bunch of sedimentary rocks that make up a province, then what the hell is a volcano doing there?”

Johnson has taken Mole Hill on as a project. On this particular October afternoon, she wears mountain boots, brown pants and a “JMU Geology” shirt, and has two undergraduate students with her – Adam Wenger, 28, a senior and Brittany Sacco, 19, a sophomore. They travel with maps, waterproof field journals and a sledgehammer, which is strong enough to break apart the hard volcanic rocks. “The great equalizer,” Johnson calls it.

The professor and her student team are painstakingly mapping the old volcano and chemically analyzing its rocks in order to piece together the story on where it came from. But that’s only part of it. She is also studying Mole Hill as a way to probe the structure and crust of the earth’s mantle beneath the Shenandoah Valley.

Covered in oak and paradise trees, Mole Hill doesn’t look much like a volcano to the untrained eye. But clues are scattered all over the mountain. Near the trailhead, Johnson points out a limestone rock, and brushes aside dried leaves for a better look. Limestones are ubiquitous to the area, but this one is different. It’s gnarly and discolored, chemically altered, she explains, by hot fluids released from the magma. “This rock is a mess,” she says. “This is what happens when you’re sitting next to a volcano.” 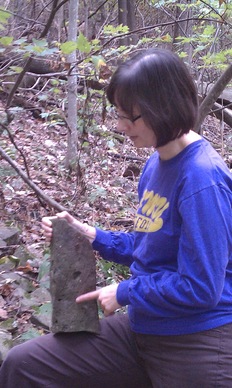 About halfway up the hill, they stop again, near a field of basalt, or volcanic, rocks. The rocks here are a dark, solid gray and column-like in shape, a sign that they once fit together. Wenger picks one up, and splits off a section with the sledgehammer, exposing its insides. Olivine crystals, beer-bottle green in color, sparkle gently inside the rock. Another basalt rock has a chunk of sandstone lodged into it.

Johnson’s theory is that under extreme heat and pressure, magma rose up through the mantle and crust of the earth and exploded through the surface, releasing lava. The lava flowed out from the top of the volcano and eventually decompressed and cooled, forming molten rock, which piled up over time, creating the mountain. As the magma ascended from deep below the earth, it also dislodged fragments of rocks from the mantle and crust. Crystals, or xenocrysts, like the olivine and another common one, pyroxene, were broken off from the mantle, she believes. The sandstone was dislodged from the crust.

She calls it the dipstick theory: “If you’re checking oil in your car, you stick the dipstick down to get a record of what’s down there. Except here, the magma is breaking off rocks on the way up to the surface.” In other words, the volcanic rocks are providing geologists with a sampling of what exists underneath the Shenandoah Valley. The evidence for this lies in the absence of these rocks elsewhere, she explains: Mole Hill is surrounded by limestone on all sides, so the sandstone must have come from deep below.

Mole Hill wasn’t the only volcanic activity in the area: Trimble Knob in Highland County and Ugly Mountain in West Virginia’s Pendleton County are also fragments of ancient volcanoes. Volcanic rock has also been found near dairy farms and inside caves in neighboring areas.

There are theories, but no consensus on how these volcanoes formed. One is that a giant body of magma once lived underneath the area. Some say it was an asteroid or meteorite. The more likely theory, Johnson says, is that it was caused by fractures in the earth, created by tectonic activity, possibly from Pangea ripping apart to form the Atlantic Ocean. These fractures allowed magma to later escape from deep below the earth and rise up to the earth’s surface.

Back in the JMU geology building, shelves are stocked with cartons of Play Doh, bags of M&Ms and geology textbooks. Johnson uses the Play Doh in her basic geology classes to demonstrate how the region’s fold and thrust faults are created, and the M&Ms to simulate crystals forming in magma. In the next room is a motorized rock saw, a magma chamber and metal cabinets packed with bags of rock samples. Behind that is the lab. 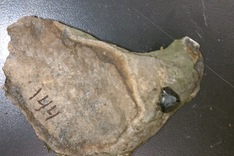 Using geochemical analyses, they are hoping to estimate the depth of the crust and the mantle, the pressure in which the crystals formed and rate at which the magma ascended. She expects to have her first crop of data by next summer.

“There’s not a lot of understanding of the mantle and the crust in this region – what’s going on underneath us,” Johnson says. “We’re trying to use all of this to put together a better picture of why anything would erupt here.”

*Correction: A previous version of this story referred to the Eocene period as an era, not an epoch.