Whip Scorpions and Jungle Nymphs: Behind the Scenes at the Insect Zoo 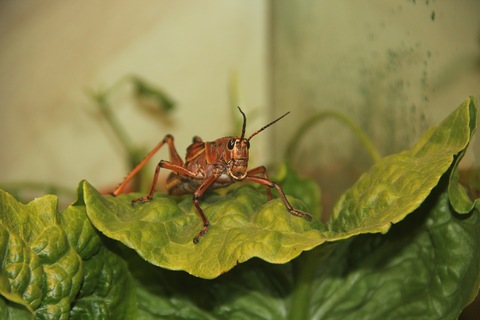 An eastern lubber grasshopper, or Romalea guttata sits on a leaf at the Insect Zoo at the Smithsonian Museum of Natural History. Photos by Jenny Marder.

And now, an end-of-the-week pause to celebrate insects and the people who love them. I was lucky enough to get a tour this week of the Smithsonian’s Insect Zoo and Butterfly Pavilion, after which I lingered, gawking at butterfly pupa and tarantulas and many-legged things, most certainly overstaying my welcome. After all, the nice people showing me around had things to do and grants to write.

But who wouldn’t linger? It was too fun getting a behind-the-scenes look at the guts of the place, the many tiny marching legs and rustling wings and the staff and volunteers that tend to it all.

In the visitor’s sections, people peer through glass, watching spiders, scorpions and giant millipedes crawl and feed and hunt. Behind those exhibits is a narrow, cavernous room, where staffer Rosa Pineda climbs up ladders and leans into cases, pulling out bugs like Malaysian jungle nymphs and walking leaves. She checks for pests, adjusts temperature and prepares their food. The eastern lubber grasshopper gets lettuce and apples and lima beans. The milkweed bugs eat sunflower seeds. Desert beetles get cat food and yams. 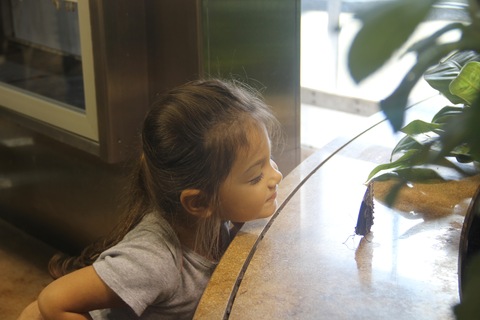 Down the hall, in the butterfly pavilion, Dan Babbitt, the exhibit’s manager, recounts what he loves about anthropods. What has kept him tethered to bugs, since his freshman year in college, when he took a boat onto a Michigan pond with his freshman biology class, dipped a net into the water and pulled up a mass of insects: large beetles, giant waterbugs and dragonflies. 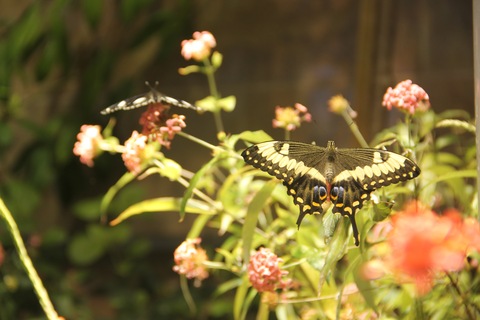 “First of all,” he said, “I’m biased because they’re awesome.” As he spoke, a blue morpho butterfly landed on his shoulder. It is an exquisite creature, found mostly in Central and South america, with iridescent blue wings. The blue, he explains, is not a pigment, it’s the way the light gets reflected off the structure of the butterfly’s exoskeleton that creates the shimmering color. Once he saw one trying to mate with the thick blue shoelaces on a kid’s sneakers.

Insects are vital for our natural world, Babbitt continued. They pollinate food crops, they feed animals and they act as natural recyclers, breaking down nutrient-rich material, which gets delivered back into the carbon cycle.

At the museum, they use bugs to teach evolution. One of Babbitt’s favorites is a whip scorpion from Tanzania, which he shows me, clinging to a slab of wood. It’s an arachnid, a spider relative, but it’s different than its arachnid brethren. Arachnids are usually loners, due to their tendency to eat one another. But this one is a social animal. It lives in dark, humid caves. And over the millenia, he explains, its front legs have evolved to act like antenna, two of which it uses for sensing rather than walking. 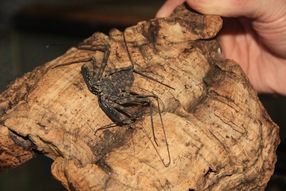 “There’s something that seems so foreign to us mammal-centric people,” he says of insects. “They can be very alienesque. But you can find insects in your backyard – they’re so accessible.

Among the 80 volunteers that work for the insect zoo are many citizen scientists. I learned from two that the best collecting vessels for insects are baby food jars and spice containers, a perfect size for the tiny silverfish that volunteer Anna Wilder found in her bathtub this week and donated to the exhibit.

And one final thing: Dan Babbitt and the staff at Smithsonian’s Insect Zoo and Butterfly Pavilion are champions of spiders, insects and other arthopods. But that doesn’t mean they’re opposed to eating them. It takes a lot less energy to rear beetle larva than it does to rear a chicken or a cow, Babbitt said. And it’s low-fat, nutrient-rich food. Plus, honeypot ants store sugar in their abdomen, and it makes them taste like honey.

One secret of survival is…eating poop? Tapeworms have prospered for 270 million years, in part by embedding their eggs in shark feces, according to a new fossil discovery off the coast of Brazil. National Geographic’s Brian Switek explains.

*Photo credits: Gaby Pigtain, 3, locks eyes with a butterfly. An emperor swallowtail butterfly, or Papilio ophidicephalus sits on a flower in the Smithsonian’s butterfly pavilion. The whip scorpion, or Amblypigid, has evolved antenna-like legs that help it sense its surroundings.

Correction: An earlier version of this story called the whip scorpion a spider. It is an arachnid.