The ant, the butterfly and their chemical warfare with an oregano plant

The Large Blue butterfly is a warrior. With its azure wings, the butterfly appears fragile in the European breeze, but in truth, it is a bombardier in search of a target — nests of Myrmica ants buried under oregano or thyme plants. The butterfly’s mission, scientists have found, is part of a delicate dance that restores balance to the ecosystem it inhabits. The ants destroy the oregano’s roots. The butterfly destroys the ants and saves the oregano.

“But many oregano plants grow in spots where Myrmica ants are absent, and to lay eggs on these would condemn the butterfly’s offspring to death,” said University of Oxford ecologist Jeremy Thomas, leaving scientists to wonder how the butterflies find their preferred victims among the thousands of ant species that might live underground near oregano.

In a new study, Thomas and an international collaboration of biologists outline an answer: The oregano plant uses chemical warfare.

The researchers found that when ants invade oregano’s territory, the plant makes a chemical agent that first tries to directly kill the ants, but then attracts pregnant Large Blue butterflies and their ant-gobbling larvae as reinforcements. The findings were published July 7 in the Proceedings of the Royal Society B: Biological Sciences

Ant-loving butterflies, known as myrmecophiles, are common. Of the 17,500 butterfly species on the planet, nearly a quarter boast larvae that interact with ants. But experts say the complexity of this newly discovered battle consisting of moves and countermoves is beautiful, unique and a first-of-its-kind discovery.

Of the known myrmecophiles, I’m not aware of another relationship that involves three species at once or middlemen to find prey, said ecologist Karsten Schönrogge of Center for Ecology & Hydrology in England, who wasn’t involved in the study.

Large Blue butterflies are considered “social parasites” because they take advantage of a social organism, in this case ants. After a Large Blue butterfly lays an egg, the resulting caterpillar produces a scent to trick the Myrmica ants into thinking it’s an ant too, at which point, the Myrmicas unknowingly carry their doom into the nest.

“The parasitic butterfly larvae live in the ant nest for at least 11 months, during which time they eat ant grubs and gain more than 90 percent of their biomass,” said entomologist and ecologist Francesca Barbero of the University of Turin, who co-authored the study. In the end, the caterpillar’s feast annihilates the nest.

In 2009, Barbero and her colleagues showed that these caterpillars take this manipulation to the extreme by producing sounds that mimic the ant queen. By elevating their social status to the highest in the ant colony, the caterpillars are left in peace to eat.

“There is a beauty in the complexity that makes these communities work,” Schönrogge says. 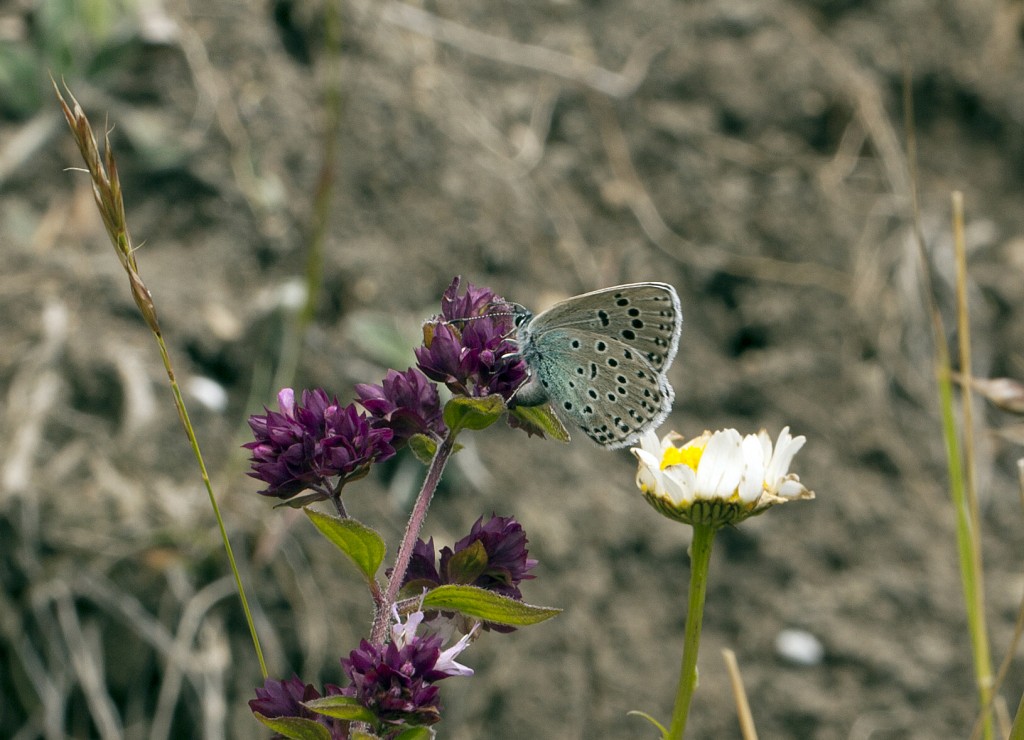 However, scientists had never observed any direct contact between adult Large Blues and Myrmica ants. The pregnant butterflies don’t spot the nests from above, since the flyers lay their eggs during a time of day when the ants are underground. Plus the Myrmica ants rarely climb the stems of oregano plants or leave a chemical trail that lasts long enough to be sniffed by the butterflies.

However when under duress by pests, such as when ants destroy their roots, plants are known to produce chemicals to ward off invaders. So for this study, Barbero and her colleagues grew oregano in enclosed terrariums with Myrmica ants, and then collected the chemical scents emitted by the plant.

The researchers found that the plants made twice as much of a chemical agent called carvacrol versus normal plants grown without Myrmica ants.

Carvacrol is a known bug killer, but in a surprising twist, the researchers found that Myrmica ants switch on a set of genes that neutralize oregano’s chemical weapon. Meanwhile, other types of ants lack this defense and succumb to carvacrol, the team found.

Carvacrol is responsible for oregano’s warm odor, and the researchers wondered if it might serve as a pungent attractant for pregnant Large Blue butterflies. They created a Y-shaped platform that paired carvacrol on one arm against unscented air on the other. The gravid butterflies picked carvacrol eight times as often. The same pattern applied when carvacrol was replaced by an oregano plant that had its roots destroy by Myrmica ants. But in contrast, the smell of a regular plant as well as the scent of Myrmica ants on their own had no influence on the butterflies.

This is the first demonstration of a plant using chemical scents to attract a social parasite as part of an indirect defense strategy, said Barbero. 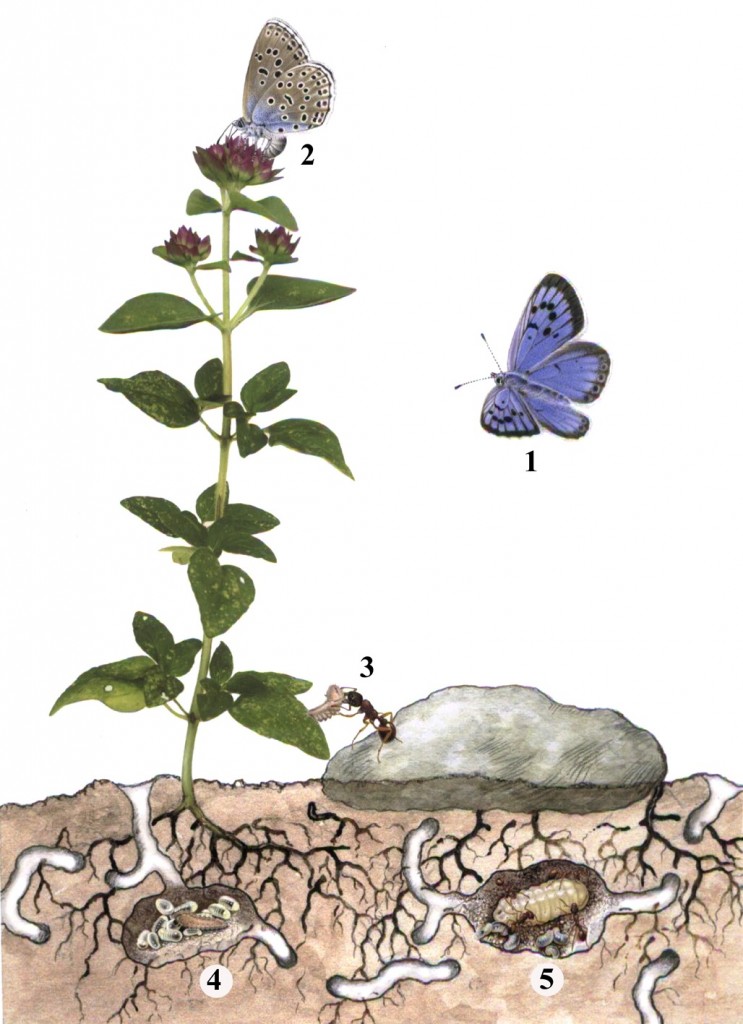 In a battle of three armies, Large Blue butterflies (1) are lured to oregano plants where the insect flyers lay their eggs (2). After two weeks, the consequent caterpillars crawl to the bottom of the plant where they exude a scent that tricks Myrmica ants into carrying the butterfly larvae into the underground colony. The caterpillars spend the next 11 months feeding on the ant grubs (4,5) and gaining 98 percent of their body mass, before ultimately killing the colony and escaping. Photo by Patricelli D et al. Proc. R. Soc. B. 2015.

If we could hop into a time machine to the early days of Large Blue butterflies and Myrmica ants, we would see that they were once friends rather than enemies, Thomas said. Much like aphids, the caterpillars and ants had a mutualistic relationship where the caterpillar fed entirely on plants but secreted sugars and amino acids that were consumed by ants.

“The ants gained abundant food and in return tended to and protected the caterpillar from enemies,” Thomas said, but then the caterpillars shifted to the dark side and began capitalizing on the ants kindness.

Thomas said, “This lifestyle is believed to have evolved at least 14 times independently among lycaenids,” which is the family of butterflies that contains Large Blues. “All are convincingly shown to have evolved from mutualistic ancestors, which is by far the most common relationship with ants,” he said.

Large Blue caterpillars only gain 1 to 2 percent of their body weight by nibbling on the oregano leaves during the early stages of life. The overwhelming majority of their sustenance — 98 to 99 percent — comes from eating ants. But if butterfly larvae tried to trick the wrong patsies — non-Myrmica ants — they’d likely get eaten. Guessing right is a matter of life and death, and especially important given the Large Blue Butterfly has relatively few eggs and is endangered.

From an evolutionary perspective, Thomas and Barbero say that the Large Blue butterflies gained an advantage by using scents to glean which oregano plants are fighting off Myrmica invasions. At the same time, the plant only loses a small, non-lethal amount of its leaves to the caterpillar. And though Myrmica might lose individual battles to the butterflies, the ants are invasive enough that their total populations aren’t at risk of being harmed by the butterflies.

“The relationship between blue butterflies and their ant hosts is one of the wonders of the natural world, and this study solves one of the remaining puzzles, ” said evolutionary biologist Ashleigh Griffin of the University of Oxford, who wasn’t involved with the study. “This study appeals to any biologist who likes to see a genuine mystery solved.”