After months of expectation, a gigantic piece of the Larsen C ice shelf broke off Antarctica sometime between Monday and Wednesday, scientists at the Swansea University-led Midas project announced Wednesday. The final split was detected by NASA’s Aqua satellite and freed a trillion ton iceberg into the waters of the Weddell Sea.

“The iceberg is one of the largest recorded and its future progress is difficult to predict. It may remain in one piece but is more likely to break into fragments,” Adrian Luckman, lead investigator of the MIDAS project, said in a statement. “Some of the ice may remain in the area for decades, while parts of the iceberg may drift north into warmer waters.”

The crack in the Larsen C ice shelf has been growing for years. From 2011 to 2015, it expanded by more than 18 miles, and then last year, increased by another 13 miles. Last month, scientists at the Midas project said the iceberg was “hanging by a thread.” 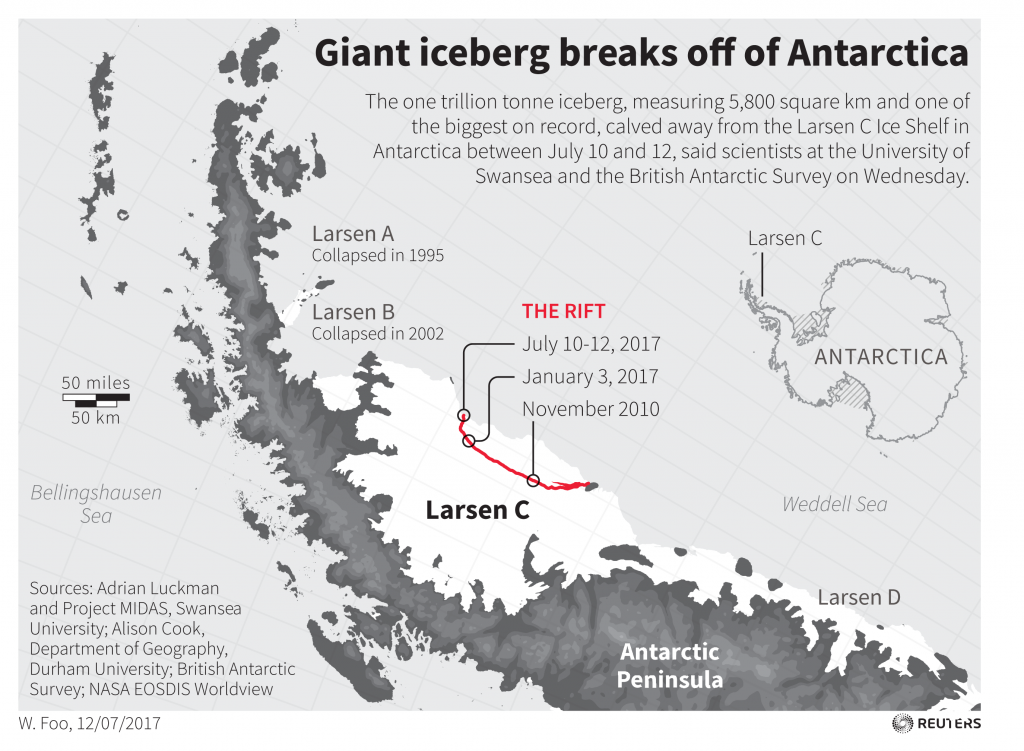 A map showing the rift in the Larsen C ice shelf that led to the calving of an iceberg on the Antarctic Peninsula. Illustration by Reuters

Because the ice shelf was already floating in the ocean, its resulting iceberg will not change sea levels if it melts. However, the iceberg does pose a threat to mariners sailing through the South Atlantic, which is where sea currents will likely carry the floating behemoth.

Another main concern revolves around the ice left behind. If the remaining ice shelf completely shatters, the event would allow glaciers on the land to flow into the ocean, which would raise sea levels. For now the ice shelf will naturally regrow, but Luckman said that computer models suggest the ice shelf “will be less stable.” Plus, any future collapse remains years or decades away, he said.

Approximately the size of Delaware, almost 2,200 square miles, Larsen C is the third gigantic ice shelf to collapse from this section of Antarctica since 1995. On average, the Larsen C iceberg will be 625 feet thick across its immense expanse, but up to 695 feet of its ice may be hidden below the water’s surface. Break out the sleds, because that’s big enough to cover all 50 states in 4.6 inches of ice.

Left: Thermal image of a large iceberg, which has calved off the Larsen C ice shelf. Darker colors are colder, and brighter colors are warmer, so the rift between the iceberg and the ice shelf appears as a thin line of slightly warmer area. Image from July 12, 2017, from the MODIS instrument on NASA's Aqua satellite.Photo and caption by NASA