How do ants synchronize to move really big stuff?

Two weeks ago, Brooke Borel witnessed a modern wonder in Brooklyn. She gaped, transfixed as a group of ants hauled a piece of dog food up a vertical wall. How did they not only have the brute strength to accomplish this feat, but also coordinate their movements to carry their prize?

Today, a new study in Nature Communications offers an answer. By videotaping longhorn crazy ants (Paratrechina longicornis) as the buggers carry large food, like Cheerios, a team of physicists outlines the precise behaviors needed to haul large objects to the nest. 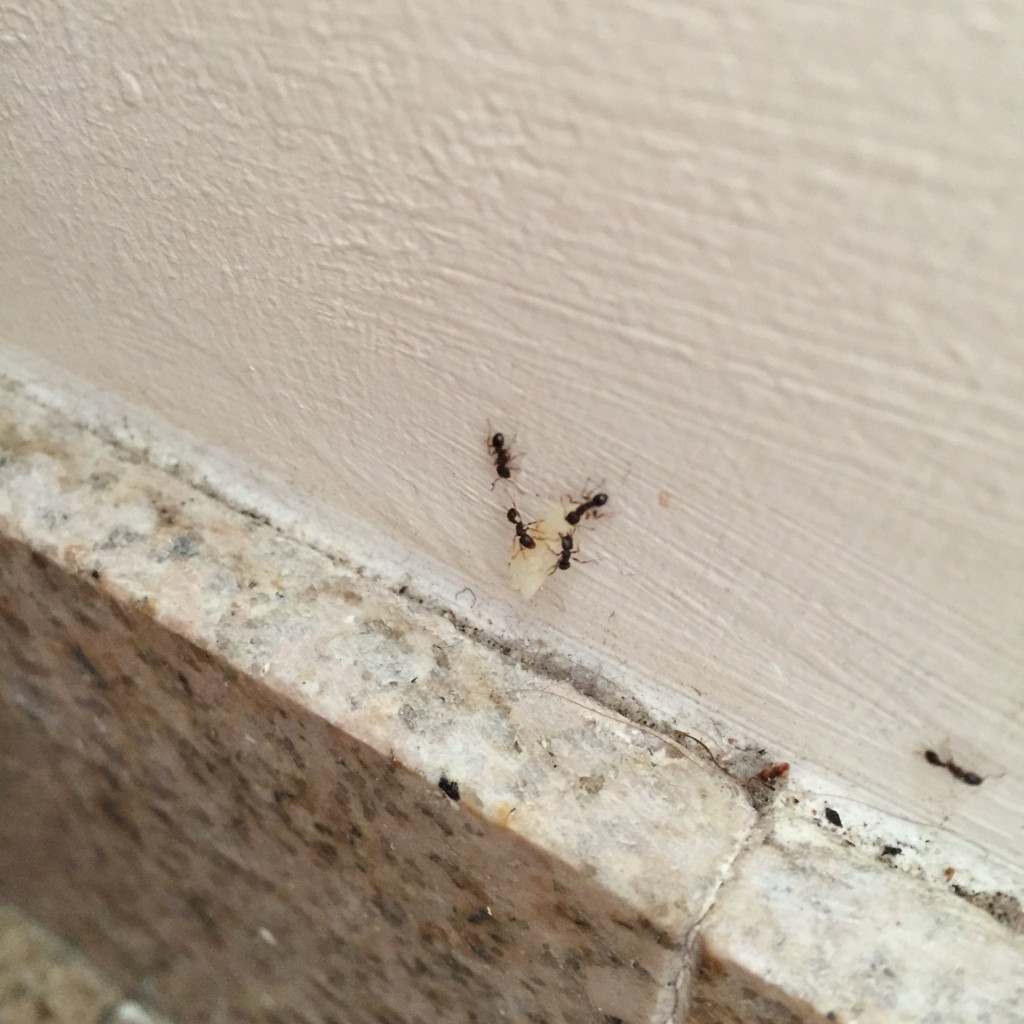 Ants tug a piece a dog food up a vertical wall in science writer Brooke Borel‘s apartment in Brooklyn. Photo by Brooke Borel

From an evolutionary perspective, group carrying has advantages and disadvantages. On the one hand, the ants can move bigger pieces of food as a team, but then an individual can’t react as quickly to danger, such as an approaching predator.

That tradeoff might explain why group carrying is fairly rare in nature. Outside of a few social spiders, dung beetles and baby rats, humans and ants are the only animals known to do it. But when you and your pals move really big furniture, you have the luxury of being able to swivel your head and talk to each other in order to work together. In contrast, an ant’s jaws are locked onto whatever it’s carrying and its antennae, which it uses to “see and smell”, are blocked too. Plus, due to how their bodies are built, ants can only pull and lift objects; they can’t push.

As physicist Ofer Feinerman and his colleagues at Weizmann Institute of Science in Israel explained in their study, there are a few ways for ants to carry a Cheerio or artificial large object over a flat, 3-foot journey to their nest without getting stuck in a tug of war. (Artificial objects were dipped overnight in plastic bags of cat food to lure the ants).

First, a majority of the ants could collect along the leading edge and pull, while a couple of stragglers lift on the other side. The second option is the group could appoint a captain. This leader would be attached to the cereal for the whole trip and lead the pack home. 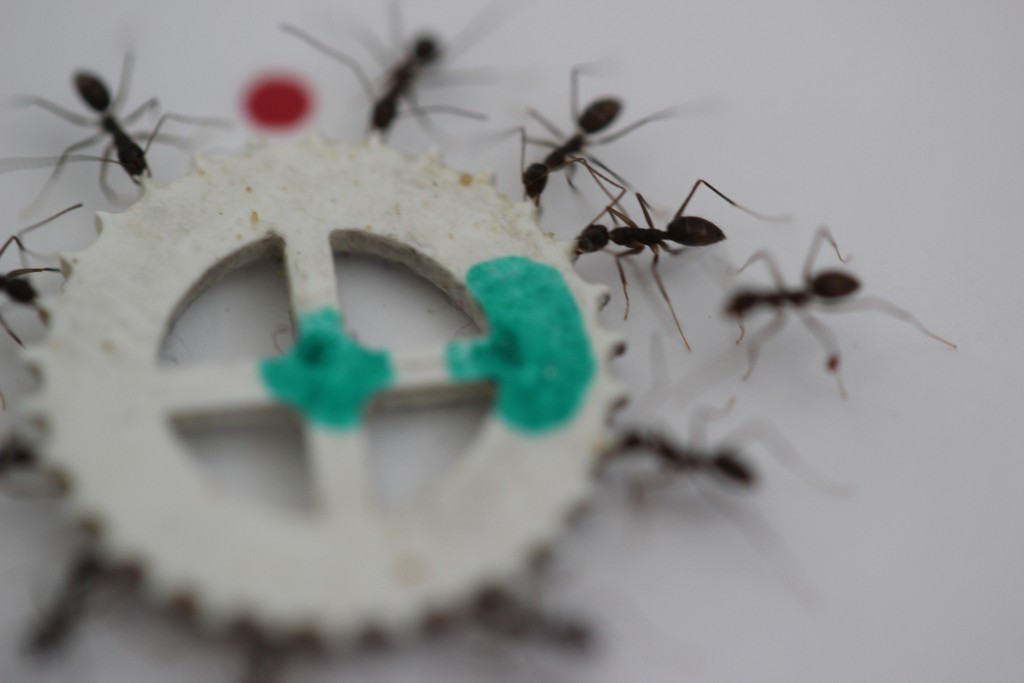 A group of longhorn crazy ants cooperate to transfer an item much too heavy for each of them to move alone. Photo by Ehud Fonio and Ofer Feinerman

The team’s video didn’t observe either of these scenarios, however. For small objects, ants might congregate along the leading edge and do some dragging, but for the larger food, the bugs were evenly distributed around the load. Their “captain ant” hypothesis went out the window, too. For most of the 98 journeys that the team recorded, they did spot one ant that clung to the object for the whole journey, but its orientation rarely matched the direction of team’s movement.

“We therefore conclude that the collective movement does not arise neither from a wisdom-of-the-crowds type averaging over all opinions nor by the continuous leadership of any single individual,”Feinerman and his colleagues wrote.

Instead, the scientists learned that the newest members of the group guide the mission. Whenever a new ant joins the group, it bites onto the object and gives a little tug, typically in the direction of the nest. This behavior repeats — new ant, fresh tug — and as this happens, the ants still attached to the load seem to relent and move in the direction of the fresh tug. That makes sense because the newest members should have a fresh, informed perspective on where the group needs to go, the team surmised. Informed ants lead the bunch.

A group of longhorn crazy ants are cooperatively transporting a food item to their nest. The movie was automatically analyzed to track the object, the carrying ants (yellow numbers), and the free ants (white numbers). Video by Ehud Fonio, Aviram Gelblum and Ofer Feinerman

By making a computer model of the movements and the forces applied in this collective behavior, the team learned that ants were more likely to relent as their load grew in size. In other words, bigger objects required more ants and greater conformity.

The scientists also resolved that the ideal size for a load is 1 centimeter in diameter or about four times the ant’s body length. However, the team also tested if 100 ants could carry objects as large as 8 centimeters in diameter, which is must larger than anything they carry in nature. The scientist observed that the ants struggled to guide objects around obstacles once they were bigger than 4 centimeters wide. This result means that the advantages of groupthink have their limits. 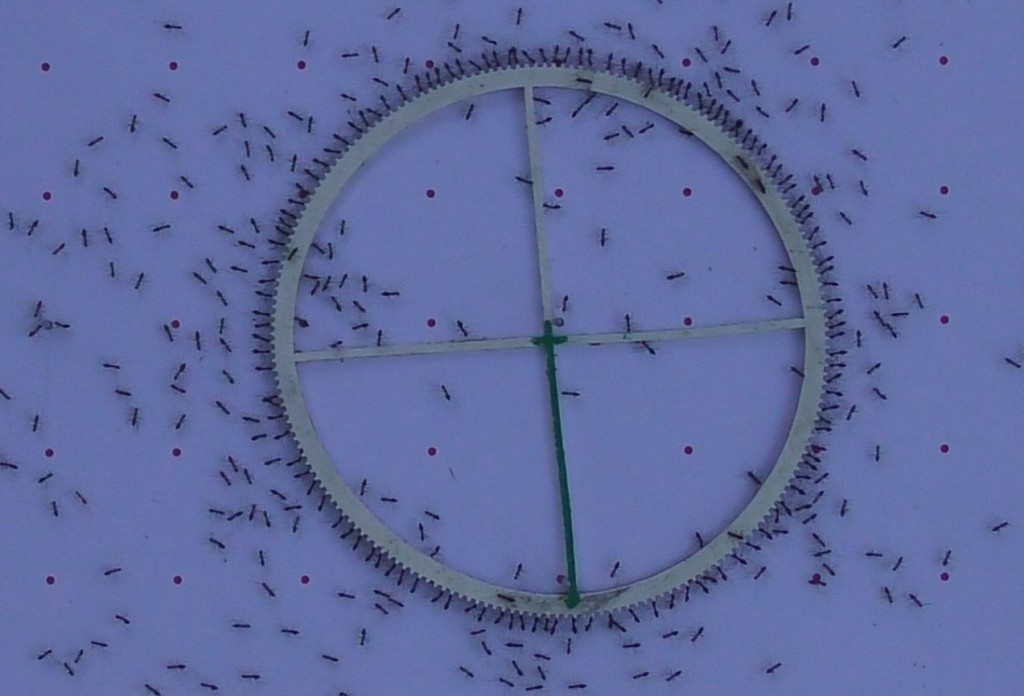 A group of longhorn crazy ants cooperate to transfer an item much too heavy for each of them to move alone. Here, the ants (about 120 of them) have been tricked into transferring an object that is much larger than anything they would naturally carry. Photo by Ehud Fonio and Ofer Feinerman

A group of longhorn crazy ants cooperate to transfer an item much too heavy for each of them to move alone. Here, the ants have been tricked into transferring an object that is much larger than anything they would naturally carry. Video by Ehud Fonio and Ofer Feinerman

Left: A foraging longhorn crazy ant often encounters food items that are considerably larger than herself (a Cheerio in this case). A new study explains how the ant groups keep direction while moving "giant" things. Photo by Asaf Gal and Ofer Feinerman of the Weizmann Institute of Science