Apollo 11’s capsule went to the moon. Here’s how the Smithsonian prepares it for a shorter trip

Outside Washington, D.C., in an airplane hangar filled with dozens of aircraft from eras long past, sits a rusty-looking, cone-shaped time capsule.

Nearly 50 years ago, that capsule — the 9,000-pound Command Module Columbia — carried astronauts Neil Armstrong, Neil Collins and Buzz Aldrin to the moon and back.

When the Apollo 11 crew blasted off from Cape Kennedy, Florida, in July 1969, the hopes of a nation rested on their shoulders. Eight days later, with human footprints marking another celestial body for the first time, it was the Columbia module that Armstrong, Collins and Aldrin trusted for the journey home. 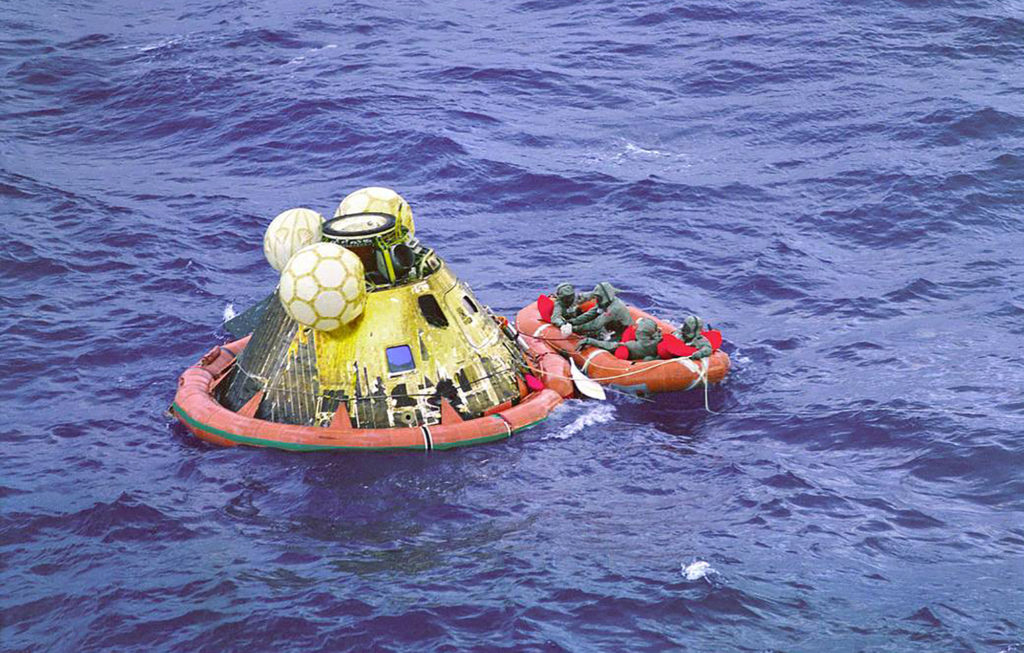 The Apollo 11 crew and a Navy underwater demolition team swimmer float near the Columbia Command Module as they await pickup by a helicopter from the USS Hornet on July 24, 1969. Photo courtesy: NASA

Today, the spacecraft and 455 other Apollo 11-flown artifacts live in the Smithsonian Institution’s 150 million-piece collection.

“We are preserving a time in history when it was the only time when this space flight happened,” said National Air and Space Museum object conservator Lisa Young. “Making sure that these objects are around for future generations is probably the most important part of our job.”

For the past few years, Young’s job has focused on preparing the module for its latest journey: a two-year, four-stop tour across America. The “Destination Moon: the Apollo 11 Mission” exhibition marks the first time Columbia will be outside the U.S. capital since a nationwide tour in 1971.

“Many people don’t get a chance to come to the Smithsonian. It’ll be great to tour it around the country and show it to other people who might not otherwise get to see it,” said Michael Neufeld, the lead curator of Destination Moon.

But moving the Columbia module across the country isn’t as easy as transporting your family across town.

Since 2016, Young’s team has been carefully cleaning and conserving the spacecraft and nearly two dozen Apollo 11 objects for the new tour. Selected artifacts include the crew’s medical kit, the visor Aldrin wore on the moon’s surface and the chronograph watch Collins attached to his spacesuit.

“These are sensitive fabrics,” Young said. “They are mylars and velcro. Things that we have today, and we use everyday, but in the 1960s, that was not common. So we needed to look at how they are degrading [and] stabilize them for the tour.”

The Smithsonian must also ensure safety during transport.

Custom crates mounted on vibration-limiting cushions will transport most artifacts from one location to another. The boxes are specially fitted for each object’s shape and surrounded by marvelseal linings and silica gel packets. The linings keep out harmful vapors, while the silica gel helps maintain humidity at levels appropriate for each artifact’s makeup.

But not everything is high-tech, explained tour registrar Viki Possoff. One step of the packing process is simply to tape photos outside of each box.

“Before you open the box, [the photos] help in identifying what it is,” Possoff said. “And in some cases, it is so you’ll know the orientation of putting boxes back into the crate.”

Moving the command module, however, is a completely different challenge.

“It’s an awkward heavy object with fragile surfaces,” Young said. “We can’t wrap it like a traditional museum object. We can’t put it in a box and sort of pick it up.”

Instead, the team hoists the Columbia into its climate-controlled container using a custom-built stand that repositions the spacecraft without ever touching it. A specially fitted “raincoat” then covers the module during any outdoor transits.

“Anything could at that point happen,” Young said. “You could have a bird fly by. You could have pollen in the air, all of those things that can get on the surfaces from our environment outside. Worst-case scenario, you could have a rain cloud. So we don’t want any of that to happen.” 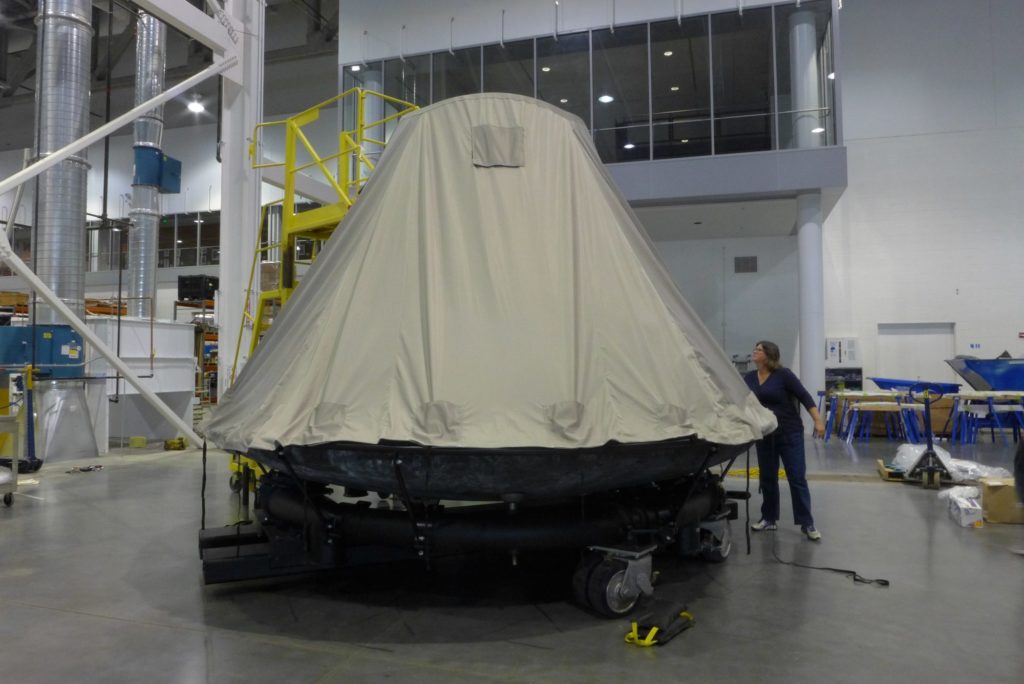 Ultimately, the goal for Young is to strike the right balance between conservation and public access.

“We don’t want to be the last people to see these. We want this to be another 50 years worth of time that they get to spend in the public eye”

“Destination Moon: The Apollo 11 Mission” is now on display at Space Center Houston. The tour, which will coincide with Apollo 11’s 50th anniversary, will then travel to St. Louis, Pittsburgh and Seattle before returning to a new exhibit space at the National Air and Space Museum in 2020.