Arctic warming twice as fast as rest of the world

Arctic air temperatures are rising at more than twice the rate of the rest of the world, a new report says.

The Arctic Report Card 2014, a NOAA-led report released Wednesday, features the work and research of 63 authors from 13 countries and breaks down the changing conditions in the Arctic region. One of the main factors the report card tackles is “Arctic amplification,” where the Arctic warms quicker than the rest of the world. 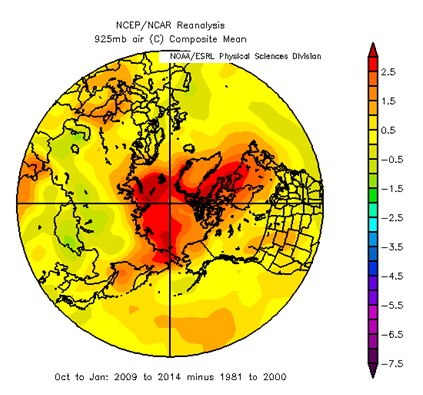 October through January Arctic temperature anomalies for the years 2009 to 2014. Image by NOAA

“Arctic warming is setting off changes that affect people and the environment in this fragile region, and has broader effects beyond the Arctic on global security, trade, and climate,” Craig McLean, acting assistant administrator for the NOAA Office of Oceanic and Atmospheric Research, said. “This year’s Arctic Report Card shows the importance of international collaboration on long-term observing programs that can provide vital information to inform decisions by citizens, policymakers and industry.”

In addition to the increasing temperatures of the air and sea surface, the report also highlights several other changes, including the decline of polar bear populations, a browning tundra, a record low for the Greenland ice sheet’s reflectivity and shrinking snow cover.

Left: A new NOAA-led report shows the continuing trend of Arctic temperatures rising at more than twice the rate of the rest of the globe. Data by NOAA