Polar bears live in a remote and inhospitable environment far from most human settlements. For most biologists, opportunities to observe these animals are fleeting. In fact, scientists’ main resources for understanding basic behaviors of polar bears on sea ice are observations of polar bear behavior and foraging rates made by Canadian biologist Ian Stirling more than 40 years ago, combined with local traditional knowledge from Arctic indigenous peoples.

With ongoing and forecasted declines in Arctic sea ice, there is a greater need to understand how polar bears use sea ice and will respond to anticipated environmental changes. To answer this question, I have been studying polar bears’ physiology and foraging behavior in the Arctic since 2013 with colleagues from the U.S. Geological Survey, the University of California at Santa Cruz, the San Diego Zoo Institute for Conservation Research and Dr. Stephen Atkinson, an independent research wildlife biologist.

In a newly published study, we provide metabolic data showing, for the first time, how many seals bears need to catch while they forage on sea ice to survive. In doing so, we found they expend more energy than scientists had previously thought. This highlights their reliance on a diet of fat-rich seals in the energetically demanding Arctic. 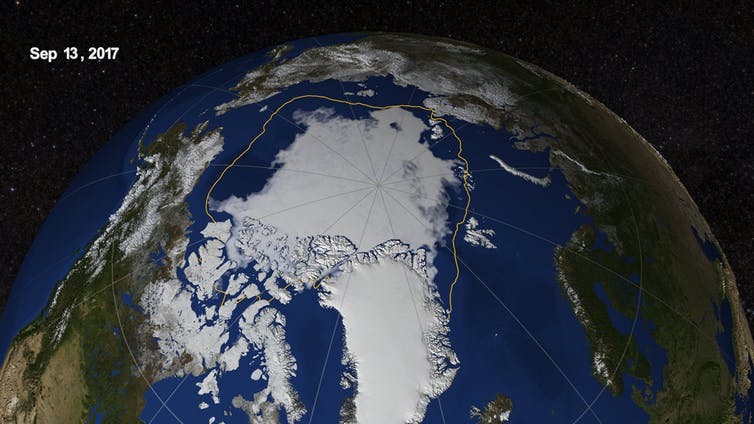 A still image of Arctic sea ice on Sept. 13, 2017, when the ice reached its annual minimum. The yellow line marks the 30-year average minimum sea ice extent computed over the time period from 1981 through 2010. Photo by NASA via The Conversation

How much energy do foraging polar bears need?

In the Beaufort Sea, where the USGS conducts research, polar bears have shown declines in abundance, survival rates and body condition. But it has been hard to directly quantify the mechanisms driving these declines.

Research suggests that bears are catching fewer seals and moving greater distances than they did historically, resulting in an energy imbalance that negatively affects their condition and reproductive success. But scientists have struggled to quantify how much energy free-ranging polar bears need and how many seals they need to catch to avoid this negative energy imbalance.

Improvements in animal research technology gave us an opportunity to gain insight into the metabolism, behavior, foraging success and movement patterns of polar bears on sea ice. However, these technologies were not designed to be used on polar bears in minus 30 degrees Celsius conditions, so it took several years to collect the information that we were seeking.

In 2013 we deployed collars equipped with GPS and video cameras on two polar bears to examine the bears’ behaviors and foraging success rates on sea ice. We managed to recover the collars 10 to 13 days later, but to our disappointment the camera lenses were covered with a solid block of ice. Still worse, the camera batteries had failed, probably due to cold temperatures, and no video had been recorded.

A year later we deployed four GPS video camera collars that had been custom-designed for us by wildlife video camera engineer Mehdi Bakhtiari to handle extreme Arctic conditions. We attached high-tech triaxial accelerometers, similar to the technology used in Fitbits, to the collars to help us measure the bears’ behavior and activity rate. We also analyzed measurements in blood samples that enabled us to determine their energy expenditure.

This time, the video cameras worked. When we recovered them, we had collected eight to 11 days of footage showing polar bears’ behavior on sea ice from a bear’s point of view, which we could link with the animals’ energy expenditures. But three of the four accelerometers had failed, again due to battery issues resulting from extreme cold conditions.

In 2015, after working with the accelerometer manufacturer, we managed once again to deploy 4 GPS video camera collars with triaxial accelerometers on polar bears. However, one bear had her heart set on moving to Canada and traveled roughly 175 miles (280 kilometers) in nine days after we collared her. To reach her, we flew in a helicopter to a village near the Canadian border, where we then were fogged in for 12 days. During that time the bear crossed into Canada, having walked nearly 270 miles (430 kilometers) since her collar had been applied. We remotely released her collar via satellite, and then waited for it to drift back into U.S. waters before making a dash to locate it. 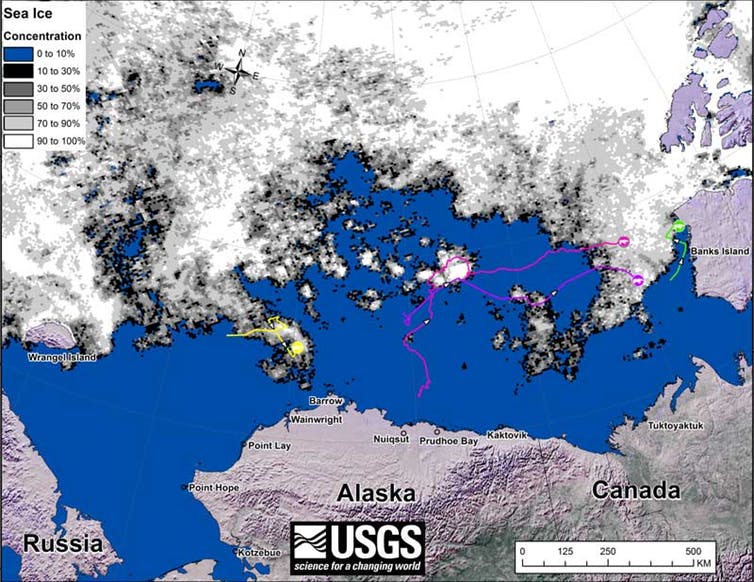 Despite these challenges, we were able to collect a remarkable suite of data on polar bears’ metabolism, behaviors, foraging rates and movement patterns. Our measures of metabolism were considerably higher than previous estimates of polar bear metabolic rates. In other words, we found that polar bears require more energy in their daily activities than scientists had previously believed – about 1.6 times more.

The video collars provided remarkable footage of polar bears’ feast-or-famine lifestyles. A bear could walk for hours before finding a seal breathing hole that interested her, and then spend minutes to hours waiting for a seal to come up for air. If that happened, the bear would stand up on its hind legs and pounce through the ice into the water to try to stun the seal, then grab its prey with its jaws and bite it at the neck. More often than not, the seal would get away and the bear would search for another breathing hole.

Of the 9 bears we studied, 5 lost mass over the eight to 11 days that we monitored them. Four of the bears lost almost 10 percent of their body mass – about 40 pounds (18 kilograms). In contrast, the four bears that actually caught and ate ringed seals gained almost 10 percent of their body mass. These large changes in body mass over such a short period of time were striking demonstrations of how heavily polar bears rely on an energy-dense diet of seal blubber.

Significantly, we also found a strong relationship between the bears’ activity levels and their metabolisms. Polar bears that were more active and moved greater distances used much more energy than less active bears.

Our findings reinforce the physiological challenges that polar bears face as sea ice shrinks and becomes increasingly fragmented. Their seal prey becomes less available, and the bears have to become more active and cover more distance to feed. While there has been much speculation about how loss of sea ice may affect polar bears, our research shows just how dramatically these animals may be affected if they have to range farther to find the food they need.

Anthony Pagano is a PhD Candidate at the University of California, Santa Cruz. This article was originally published on The Conversation. Read the original article.

Left: A polar bear keeps close to her young along the Beaufort Sea coast in Arctic National Wildlife Refuge, Alaska in a March 6, 2007 photo. Photo by Susanne Miller/US Fish and Wildlife Service/Handout via Reuters