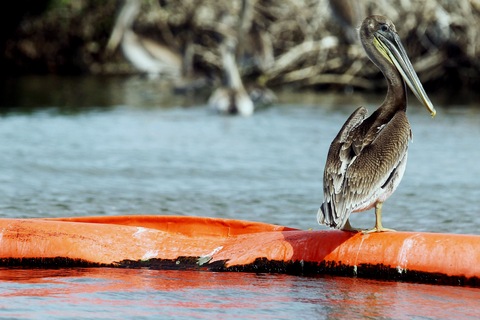 A pelican rests on an oil retention boom on July 25, 2010 near Grand Isle, Louisiana. Photo by Mario Tama/Getty Images.

Attorney General Eric Holder and EPA Administrator Lisa P. Jackson announced a major lawsuit against BP, Transocean and other companies the Department of Justice says are responsible for the massive oil spill in the Gulf of Mexico in April of this year.

Holder said they will seek damages from nine defendants without limitation under the Clean Water Act and the Oil Pollution Act, which could total billions of dollars.

“I have seen the devastation that this oil spill caused throughout the region,” Holder said.

“We intend to prove that these defendants are responsible for government removal costs, economic losses and environmental damages without limitation,” he said.

Jackson said the government is seeking a “fair deal” for the region that would help those whose livelihoods were affected by the oil spill.

We’ll have more on the lawsuit on Wednesday’s NewsHour. Stay tuned.