The smell of freshly baked brownies can trigger a stampede to the kitchen, while the stench of a garbage dump makes us hold our breath. Now, a study from the Weizmann Institute of Science in Israel shows that not everyone takes a deep breath to capture a whiff of a cookie or plugs their nose when the smell of a skunk draws near.

Children with autism inhale through their nose or sniff with the same fervor across all smells — good or bad — according to the new study in Current Biology. The investigation found that children without autism take long, deep sniffs in response to pleasant aromas and short, shallow sniffs around unpleasant odors.

“The response is automatic, they do this without thinking,” said Liron Rozenkrantz, the lead neuroscientist on the project.

The team studied the sniffs of 36 children, half of which had autism. To measure each sniff, scientists used a ‘computer-controlled air-dilution olfactometer’ – a computer connected to a small collection of tubing and wires that stretched from ear to ear and rested just below the nose. The apparatus delivered scents and measured sniffs at the same time. Rose and shampoo scents served as pleasant aromas, while foul odors comprised sour milk and rotten fish odors. During the ten minute experiment, the kids watched a cartoon or played a simple computer game as a distraction.

The study found that autistic children with the weakest social skills had the most abnormal sniffing patterns. The researchers also determined that the autistic sniffing pattern isn’t due to a preference for good or bad smells. Children with autism were just as good as children without autism at pointing out items that generally smell good or bad in a visual task. However, there was no connection between sniffing behavior and the motor impairments seen with autism.

The researchers designed a computer algorithm that could recognize these autistic sniffing patterns. Ultimately, the program was able to successfully diagnose autistic children 81 percent of the time. Developing a non-verbal test to diagnose autism, such as this computer program, could help to plan early interventions. 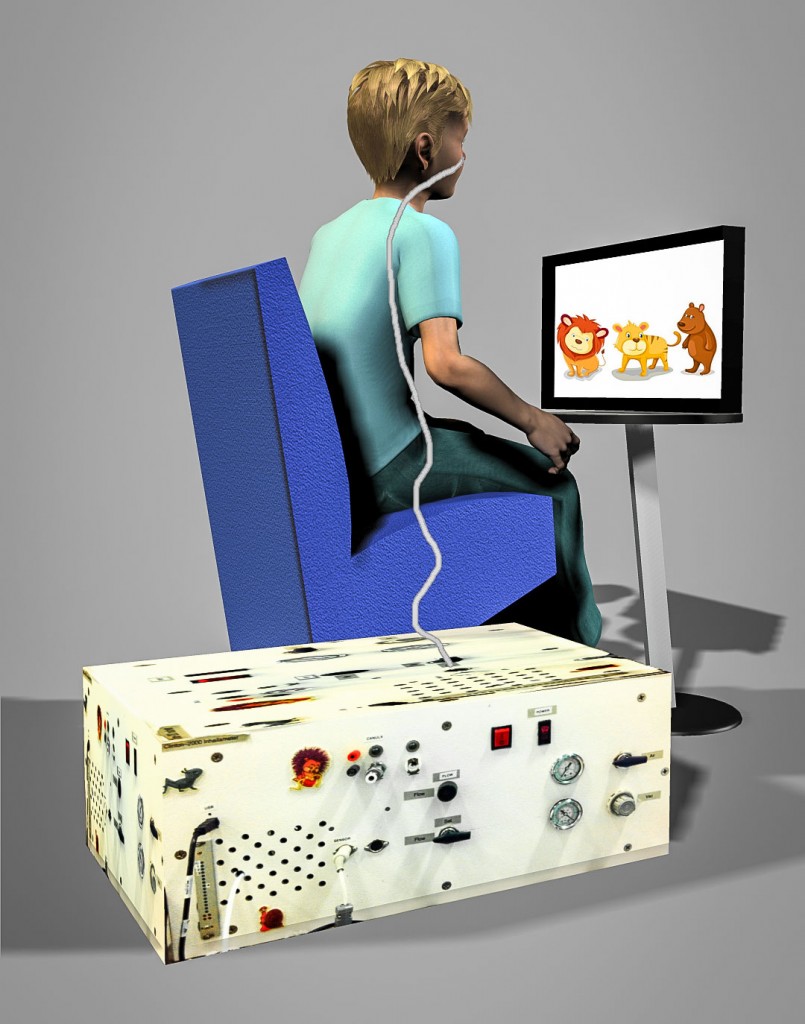 An image depicting the measurement of nasal airflow while a child is presented with pleasant and unpleasant odors. Children were able to watch a cartoon during the ten minute experiment.
Photo by Ofer Perl

This new computer program is good at spotting autism in children around seven years old, but questions remain over where it could detect autism earlier than four years old – the average age of diagnosis.

Noam Sobel, a neurobiologist and senior author on the study, definitely thinks it is possible but acknowledges more research is needed. It can be difficult to get older autistic children to try sniffing equipment, he said, but babies don’t refuse and the procedure is nonaversive. His four-month-old daughter didn’t fuss when he put the apparatus on her face. Now two years old, she showed a typical sniffing pattern, but “we need to see this in more than one case,” Sobel said. Future studies will look at younger children and different neurodevelopmental disorders.

Sobel wonders “whether olfactory impairment is at the heart of the social impairment in autism.” Social chemosignals, like olfaction, are a major component in all mammals. Dog owners see this when their furry friend gets up close and personal with another pup out for a walk.

“Even though we aren’t consciously aware of it, humans pick up on these signals – fear, social dominance and sexual reciprocity. Imagine a world where you get all those signals wrong, you are going to be socially impaired,” Sobel said, suggesting that distorted sniffing may contribute to impaired social skills.

Left: Some children with autism don't react to pleasant or foul odors in the same ways as kids without autism, according to a new study. Photo by deniseedgellslark/Getty Images