After five years spent documenting the behavior of glaciers, photographer James Balog has concluded that the term “glacial pace” is an oxymoron. Once, his teammates saw a chunk of ice roughly the size of southern Manhattan — from 34th Street to Battery Park — break free from the Ilulissat Glacier in Greenland and bob out to sea.

“Glaciers are very fast-moving characters,” Balog said. “They respond on an hourly, daily and weekly basis to the weather conditions around them.”

Hari Sreenivasan spoke with Balog Wednesday about his documentary, “Chasing Ice,” in which he chronicled the effect of climate change on glaciers, using 34 time-lapse cameras at 16 glaciers in Greenland, Iceland, the Nepalese Himalaya, Alaska and the U.S. Rocky Mountains. In the process of filming the documentary, he suffered a series of setbacks. Equipment failed, and harsh mountaineering conditions led to knee injuries, requiring multiple surgeries.

But the pictures are stunning and provide a vivid picture of what’s occurring in the icy part of the world. You can watch the conversation in the video above.

The documentary comes at a time when glaciers have been melting at unprecedented rates, and scientists have been watching them closely for evidence of future sea-level rise.

A study released Thursday in the journal Science finds that ice sheets are melting three times faster than they did in the 1990s. The new research uses data from various satellite surveys to develop a consensus on what climate change has done to the world’s ice sheets. 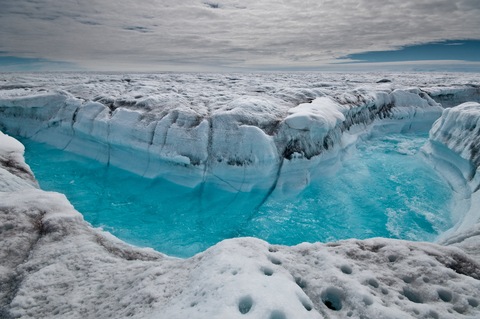 Surface melt water rushes through a stream channel along the surface of the Greenland Ice Sheet. Photo courtesy of Ian Joughin

The study finds that the world is losing 344 billion tons of ice annually. That ice sheet melt has accounted for 20 percent — about 11 millimeters — of global sea level rise since 1992. Two-thirds of the ice loss was from Greenland, where the melt rate is nearly 290 billion tons a year. That’s up from 55 billion tons a year in the 1990s. 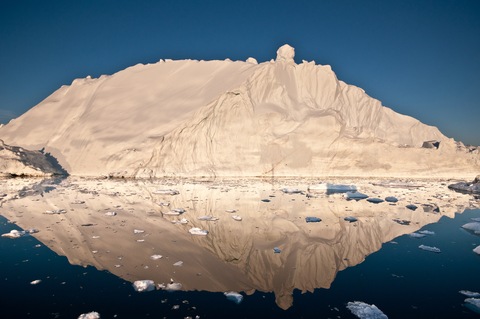 The midnight sun casts a golden glow on an iceberg and its reflection in Disko Bay, Greenland. Photo courtesy of Ian Joughin

Warmer ocean currents lapping the edges of these glaciers will further accelerate their losses, said Ian Joughin, professor of earth science at the University of Washington and author on the study.

While the consensus doesn’t say much about what the future holds, it does give scientists a better understanding of the rate of ice melt, which they’ll use in models that measure ice sheets.

“What this really is is a tour de force of careful measurement by scientists who are trying to get it right going forward,” Alley said.