Bats flip like Tony Hawk to land upside down

Most bats roost by hanging from their feet, which means they must land upside down on cave ceilings. And to stick the landing, they employ similar mechanics as skateboarders and pirouetting figure skaters, according to a new study in PLOS Biology. By using high-speed videos, researchers learned that bats use inertia rather than air flowing over their wings to execute the flip needed to land. And in the cases where they miss the mark, they use the same moves to recover and fly away.

“We’ve been thinking about how bats land for seven or eight years,” said Brown University evolutionary biologist Sharon Swartz, who co-led the study. She says that because flight is trickier for bats than other winged creatures. Anyone who has ever eaten a chicken wing knows that they only contain a few hollow bones and joints. Bat wings, in contrast, have heavy bones and are packed with joints.

“Bat wings are just like our hands with lots of skin between them,” Swartz said. This skin is super soft and compliant, which is troublesome too. Think of kite material, which is stiff, not really stretchy and superb at catching wind, she says. Bat wings are the opposite, not stiff and stretchy, meaning their aerodynamics are often unique when compared to insect and bird wings.

That distinction is on full display when bats land in this new study. Bats can abandon aerodynamics altogether when they land upside down.

To discern this, Swartz and her long-time collaborator — Brown engineer Kenneth Breuer — filmed high-speed videos of Seba’s short-tailed bats (Carollia perspicillata) as the mammals landed on a gauze net attached to the ceiling. They then took those videos and analyzed them with computer software to dissect the precise motions of the wing.

“We know all of its angles, joint angles and wing postures that happen during this two-second maneuver,” Breuer said. “What they do is move their wings in very characteristic ways in order to manipulate their center of mass and moment of inertia.” 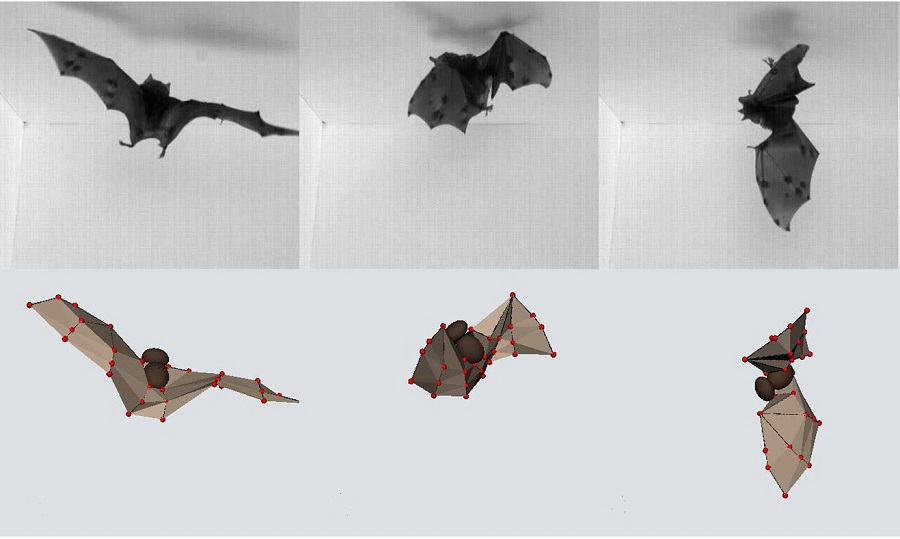 As the bat approaches that landing site, it slows down and brings its posture vertically, using its wings in an asymmetric manner. It brings its left wing in, flaps, is able to rotate and then it brings its wings forward and that enables it to pitch, so the body rotates. It stretches its legs out, and it’s able to grab onto the gauze with its feet and land.

All of this happens in half a second.

The behavior echoes what happens with pirouetting figure skaters. They pull in their arms at different moments to speed up or slow down the velocity of their spins or rotations. High divers and skateboarders make the same moves while twisting through the sky.

“In these cases, when they don’t have anything to push off against, they have to use adjustments in the moment of inertia to create these moves, these rotations,” Breuer said.

A bigger surprise came when the team looked at their computer models. They learned that the bats could perform the maneuver almost entirely without aerodynamics or accounting for how air flows over their wings. Inertia is the master switch to spinning.

“It never would have occurred to me that aerodynamics would play such a small role in landing. I always think of flight as a primarily aerodynamic phenomenon. Wings are aerodynamic organs, and landing seems so obviously to be a flight behavior,” Swartz said. “Inertia can play an important role in flight dynamics, but the relative unimportance of aerodynamics is still quite astonishing.”

Leaning on inertia might explain another phenomenon being studied by Swartz and Breuer’s teams. When bats exit a cave in a giant swarm, they often collide in mid-air. But they don’t crash. Swartz says inertia keeps the pace of the wing going.

“In the lab, we have blown strong gusts of wind at bats. They’re disrupted for a wing beat, but then they keep going. Inertia seems to play a role,” Swartz said.

Swartz said the next plan is seeing if these landing controls apply to other bats. Some species mimic Seba’s short-tailed bats, by flipping and grabbing their target with both feet, which is called a two-point landing. Others latch to an area with both hindlimbs and the thumbs of their wings (four-point landing).

“In Central America, there are some bats that roost head up thanks to suction disks on their wrists and ankles. They roost inside furled up leaves in tropical forests,“ Swartz said. “They don’t end up upside down. So how do they land? There’s almost 1,400 species of bats, and we’ve just scratched the surface.”