“Better stay back. They’re getting mad!” Jeremy Jelinek hollers over the angry buzzing of his beehives.

Jelinek, a Michigan beekeeper, has been stung more times than he can count. On this day, he is shipping his bees to Wisconsin where they will pollinate late blooming crops. The disruption has upset the bees, and to calm them, he wafts smoke over the hives as he loads them on the truck. That helps, but only a little.

In the past, farmers could rely on feral bees to do the job. But the number of bees in the United States has declined in recent years due to disease and colony collapse disorder. As a result, apiarists like Jelinek must transport their bees as far as California to get the work done.

It’s been a bad season for the bees. During a typical year, Jelinek’s bees work in the South until April or May before he ships them north. But in Michigan this year, fruit trees bloomed unseasonably early, prompting Jelinek to ship them in March instead. But upon arrival, a series of frosts killed 200 of his hives, each of which contained 70,000 bees. The bees that did survive found the weather too cool and windy to fly, so the remaining blossoms weren’t well pollinated. Frozen blossoms also meant there was less food for Jelinek’s bees, so he had to find other food for them.

Honey bees prefer warm temperatures and calm winds to gather nectar and pollinate. Nikki Rothwell, district horticulturist for Michigan State University, said weather is key to pollination; without mild weather, the honey bees won’t fly. If bad weather kills blossoms, the bees have nothing to pollinate, and they starve. Entomologists fear that if spring continues arriving early, bees may not wake from hibernation in time to pollinate and feed on the spring blossoms. A study from Cornell University in 2011 said that while bees have been keeping up with earlier springs so far, they may not be able to do so forever.

Those changes are hard on apiarists, like Nancy Adams in Kentucky, who says she’s been struggling to save her hives as weather patterns shift. 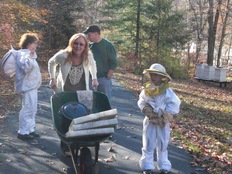 “My bees stayed active throughout the record breaking warm winter and I lost two-thirds of my hives to starvation related to this,” Adams said. “I am losing many of my hardwood trees to blight. Flooding has damaged my farm infrastructure. I have lived here for 25 years and have not experienced anything like this prior to the last three years. I really can’t anticipate any reliable profit and cannot generate a business plan related to expansion. I need support.”

But while Michigan state has provided some relief to farmers who lost their orchards this spring, there is no disaster relief for apiarists. The Farm Service Agency disaster relief program, a part of the 2008 Farm Bill that offered emergency assistance to livestock owners, including beekeepers, expired September 30, 2011.

“These programs were a lifeline to a lot of livestock producers out there and they no longer exist,” said USDA spokesman Matthew Herrick.

As the drought across the United States threatens other livestock, there is renewed interest in creating a program that will aid ranchers and beekeepers in the upcoming Farm Bill.

Jelinek says he’s worried that warmer winters and springs will endanger his bees and destabilize his business.

“If we don’t have consistent good weather, our bees are not going to build [honey comb] the way they should. And that’s going to affect our honey crop, which affects the pocketbook,” he said.

PBS NewsHour will have more coverage on the cherry crop failure in Michigan this week. This is a part of our ongoing series “Coping With Climate Change.” . Watch our full report on Thursday’s NewsHour broadcast.

Please take a moment to fill out a survey about our science and climate change coverage.