The countries where global warming will shrink bank accounts

It’s no secret that summer lends itself better to beaches and barbecues than actual work. Yet the instinct to shirk work in hot weather is more than a summer slowdown. It’s a broad phenomena that may cripple some nations as global warming progresses.

A new study from Stanford University has pinpointed the optimal annual temperature for economic productivity, and it’s this: 55.4 degrees Fahrenheit, or 13 degrees Celsius. The researchers show that when the climate exceeds this temperature, the country’s economic output drops precipitously. Based on their model published today in the journal Nature, this pattern has held steady for more than 150 countries, affecting both rich and poor, for more than half a century.

If global warming isn’t checked, the team expects average global incomes will be slashed by a quarter by 2100. So whether you’re an Indonesian rice farmer baking in the hot sun or a tech jockey sitting in a cool Silicon Valley office, you can expect your economic prosperity to decline.

“The results indicate that societies will need to adapt in ways that are likely to be expensive, or [they will] face even greater damages in terms of lost GDP,” said economist Michael Greenstone of the University of Chicago, who wasn’t involved in the project.

Stanford economist Marshall Burke and his colleagues created this new projection for the future by treating 166 countries like patients getting regular health checkups.
The team isolated the annual temperatures of each country from 1960 to 2010, and then looked at how that country’s economy performed during each of those years. By comparing warm years to normal years, the team was able to chart how individual economies respond to temperature.

A prediction for how gross domestic product (GDP) will change across the globe by 2100. Colder countries, like Canada, will see an economic boost with climate change, while most tropical nations will witness a drop. This model assumes a “business as usual” global warming scenario, wherein unmitigated climate changes raises temperatures by 4.3 degrees Celsius (8 degrees Fahrenheit) by the end of the century. Photo by Burke M, Hsiang SM and Miguel E., Nature, 2015.

Even when accounting for cultural differences, technological innovations, political upheavals, and economic atom bombs like global recessions, these researchers found an optimal temperature — again, 55.4 degrees Fahrenheit — that, in Burke’s words, “is really good at producing stuff around the world.”

On a small scale, it’s easy to see how temperatures could impair industries like outdoor construction or agriculture. A drought during a growing season can wipe out crops, whether you’re a midwestern farmer in the U.S. or in Sub Saharan Africa.

But by examining the macroeconomics of climate change, the findings by Burke and his companions support a budding phenomena wherein even white collar jobs in air-conditioned offices will feel the burn of global warming. Prior research in India, for instance, suggests that worker productivity in textile mills drops by “1 to 3 percent per degree Celsius,” despite limited heat stress in the factories. Meanwhile, automobile assembly lines in the U.S. slow down when temperatures outside become too hot. 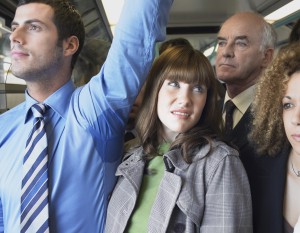 “We are already experiencing the economic impacts of climate change — heatwaves, for example, are increasing health costs and employee absenteeism,” economist Thomas Sterner of the University of Gothenburg wrote in accompanying commentary also published today by Nature.

The explanations for the decline in white-collar industries remain unclear, Burke said. What we do know is society gets a little crazy when it’s hot. Fatal car accidents and violence escalate. The rate of heart attacks spikes. Sleep might also be a factor. Burke’s team is currently looking into how sleep quantity and quality dictate economic output on a broad scale.

“It’s an intuitive idea, and we’re searching for quantitative evidence at the moment,” Burke said. Like an itchy, uncomfortable sweater, global warming might simply aggravate society by building collective stress among groups of people.

Until today, the conventional wisdom was that the economic burden of global warming would primarily be felt by poor nations. A seminal study in 2008 drew the relationship between temperature and economic output as a straight line. “The higher temperature, the bigger the costs,” Sterner writes, which meant that low-income nations would be burdened heavily in the future, given most reside in warm climates. 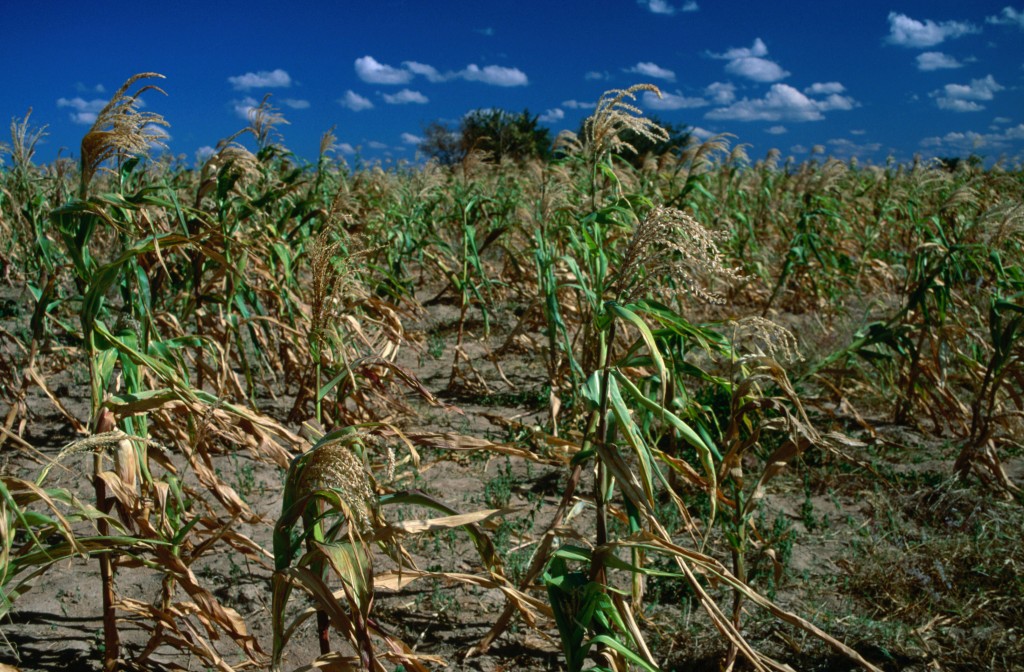 Cornfields during a drought in Tanzania. A 2012 study from MIT predicts that Sub Saharan Africa will witness a decline in the yields of its most common crops over the next century. Photo by Dennis K. Johnson/via Getty Images

Sterner writes that by not assuming a linear relationship, the new model from Burke’s team paints a more accurate picture. It can account for nuanced, micro-level responses between economic productivity and temperature.

As a country’s average temperature gets hotter and extends further past the 55-degree Fahrenheit threshold in Burke’s model, economic productivity fares worse. Poor countries would still suffer the brunt of unmitigated climate change over the next century, but rich countries take a hit too. The annual temperatures for nations like China and the U.S. already hover around the 55 degree-Fahrenheit cliff, so they might witness Overall, 77 percent of the countries surveyed could be poorer by 2100 due simply to global warming. 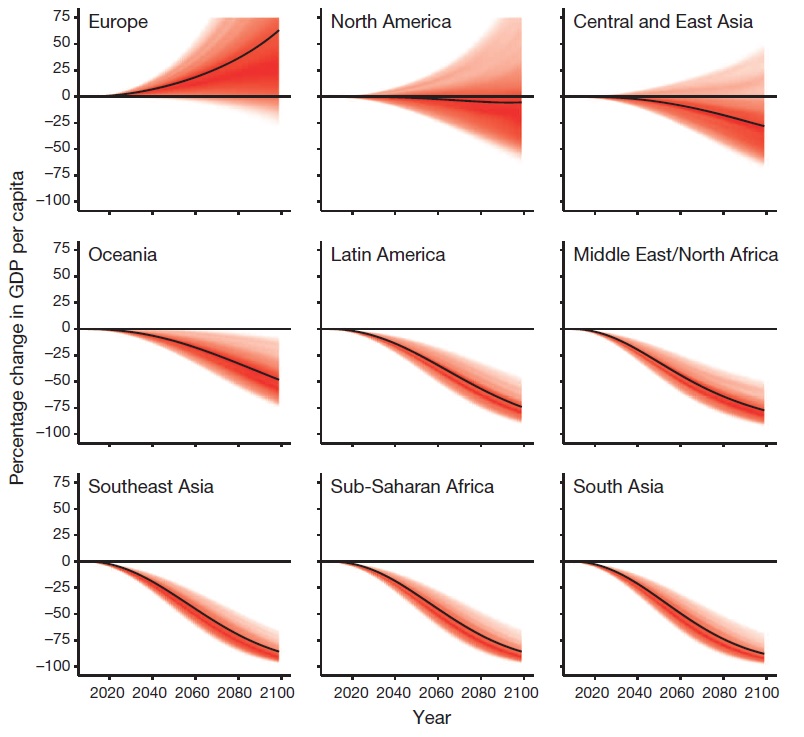 “All told, these estimates equate to much larger economic losses than most leading models suggest…,” Sterner writes. “ The current leading models, referred to as integrated assessment models (IAMs), are already being used as a basis for policy. In the United States, there have been considerable battles, even in Congress, concerning the ‘social cost of carbon’, which is based on the three most prominent IAMs.”

Burke’s study argues that Congress and other policy agencies have based their predictions on the social costs of global warming and carbon pollution on estimates that are off by several hundred percent.

“[This study] is part of a growing literature suggesting that climate change is more harmful than current models indicate,” Greenstone said.

Left: A new study from Stanford pinpoints the best annual temperature for getting the job done. Photo by H. Armstrong Roberts/ClassicStock/Getty Images