Baby, I’m howlin’ for you. Male howler monkeys make deep and boisterous calls to attract mates, but the deepest-pitched songs may come at cost: the size of their testicles. A new study in the journal Current Biology examines this relationship and reveals the untold story of the sacrifices male howler monkeys make when facing competition for mates.

University of Utah primatologist Leslie Knapp and her colleagues were interested in these howls, not only because they’re so boisterous, but because their sound can vary dramatically between species and individuals.

If you’ve ever been South America, and you hear a loud howl early in the morning, it’s probably a howler monkey. They’re communicating about where they are and what’s going on. Both males and females make the noise, but you can detect small differences between individuals in the social group, in terms of the depth and the pitch and the amount of howling that is done.

In case, you haven’t heard a howler monkey, here’s an example:

You can see how much effort it takes. It’s a rhythmic howl, as it gets closer to the end, you can see this male gets kind of agitated. It makes as much effort as possible to make more noise and get a deeper sound to the surrounding audience. Female may use these signals and others to tell if the male is more fit.

To glean what controls these howls, Knapp sent one of her researchers, Jacob Dunn, to museums across Europe and the U.S. Dunn combed these collections for preserved specimens of howler monkeys, namely their hyoid bones. A hyoid is U-shaped bone in the throat that cages the vocal chamber. Its size is thought to dictate if a primate’s call has a low or high pitch.

Dunn and his colleagues used 3-D laser scans to measure the volumes of 255 hyoid bones from nine howler monkey species. 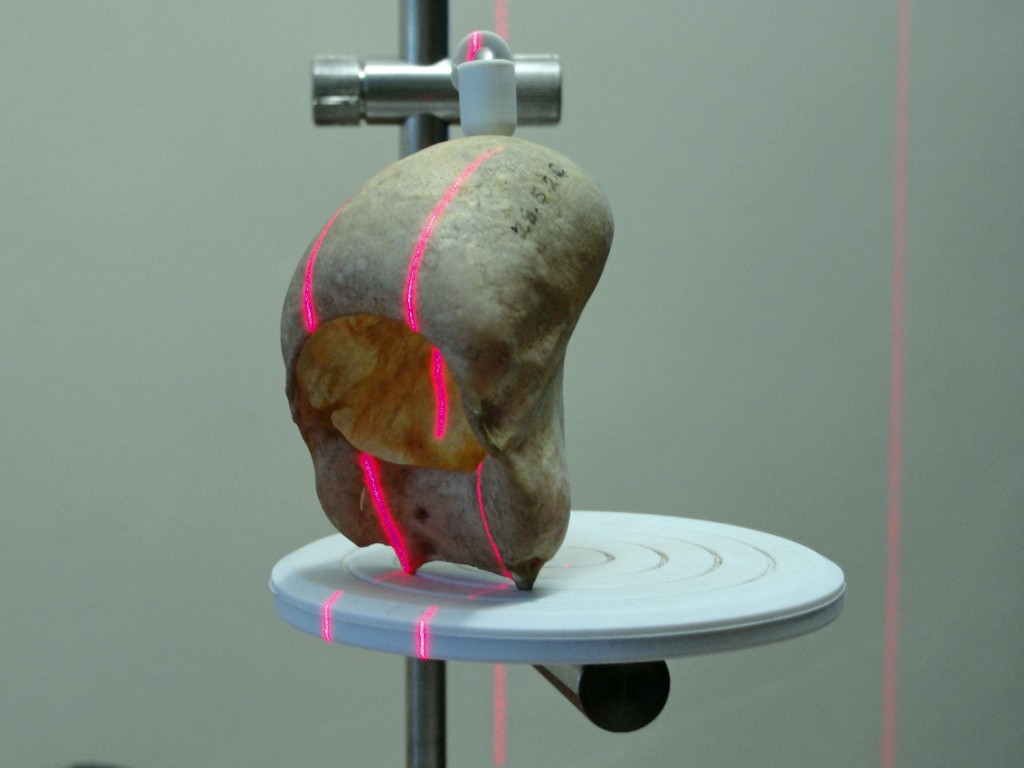 This photo is of a 3-D laser surface scanning of a howler monkey hyoid bone. Photo by Jacob Dunn

Next, researchers read papers or made hand measurements with calipers to collect data on the testicle size of monkeys from five of those species. They also looked at data on the monkey’s social group size, body weight, skull length and canine length. Plus they record vocalizations among different howler monkey species in South America. Their goal: to discern what features might correlate with the sound of a howler monkey’s love call.

They found that there are a number of sexual trade-offs when it comes to howling. First, male hyoids were three to eight times bigger than female hyoids. The biggest males had hyoids were 10 times larger than the smallest males.

“The male monkeys with the deepest- and lowest-pitched howls are giving the impression of having a much bigger body than they actually do,” Knapp said. “Male howler monkeys weigh about 20 pounds or less, but the kins of sounds of the deepest vocalizations compare to what might be made by tigers or red deer.”

One might describe this as the Barry White phenomena. 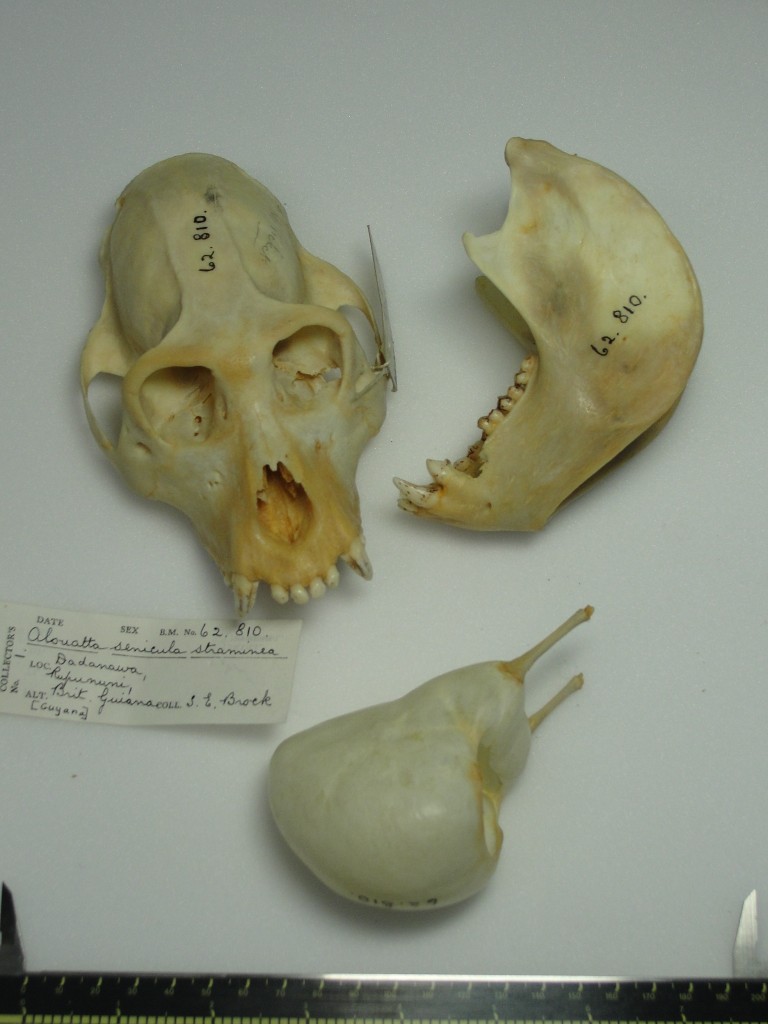 This photo displays (clockwise) a skull, mandible and hyoid bone of a red howler monkey, indicating the enormous size of the hyoid relative to other body parts and total body size. Photo by Jacob Dunn

“Females of our own species tend to find deeper voices, like soul vocalist Barry White’s, more attractive and romantic,” Knapp said in a statement. “Deeper voices are thought to reflect a larger body size, which could represent a good choice for a mate.”

But with howler monkeys, the sexual trade-offs don’t end with voices. Male monkeys with larger hyoids, which make lower-pitched calls, had smaller testicles. They also tended to live in isolation with a community of a few females.

In contrast, males with smaller hyoids had bigger testes and lived in groups where they had to compete with other suitors for female mates.

Given females have more partners to choose from, males living in large groups may have evolved larger testes in order to make more sperm. More sperm means that they can spread their seed further throughout their community, elevating the odds that their genes will be passed onto to the next generation.

“We know that testes size often results as a consequence of male-male competition. For instance, chimps have large testes, so they can produce more sperm,” Knapp said.

The tradeoff appears to be hyoid size and vocal range. A male howler monkey living in a harem community by himself may have evolved to warn off other suitors with deeper calls. At the same time, his balls shrank, since there is less competition.

In future work, Knapp and her colleagues plan to see if these factors — howl pitch and testes — determine mating success in howler monkeys living in Mexico.

Left: A chorus of howler monkeys of the species Alouatta caraya. Photo by Mariana Raño