Born in 1999, cubesats are the generation Y of satellites. They’re miniaturized and inexpensive, while doing the stuff of regular satellites — tracking stars and beaming telecommunications. But like any space device, they need fuel to venture through space.

So Bill Nye, the legendary science guy, and a few other star lovers teamed up to make LightSail – the first cubesat pushed by sunbeams. Just as a sail boat harnesses the wind to move, LightSail uses energy from the sun to propel through the sky.

“You could pick almost any destination in the solar system if you have time because you never run out of fuel – the sun shines all the time,” Bill Nye said at a news conference on Wednesday. These satellites hold the possibility of traveling farther distances faster.

Scientists have dreamed about advances in solar sailing technology for decades and are excited by the implications of LightSail. Currently, aerospace researchers are limited by time and money. It is much easier to fund the launch of many small satellites that don’t rely on chemical fuel than to fund a larger, more expensive satellite with a single destination.

LightSail’s canvass is the size of a boxing ring, but prior to the mission’s May 20 launch, scientists packed its massive wings into a container the size of a bread box. Then off it went, hitching a ride from Cape Canaveral into earth’s atmosphere on the United Launch Alliance’s Atlas V rocket. To avoid scrambling LightSail’s signals with other cubesats on the trip, its sails remained stowed for the first four weeks in the sky. While the LightSail waited for its debut, it beamed down its geographical position to researchers at the California Institute of Technology and the Georgia Institute of Technology. 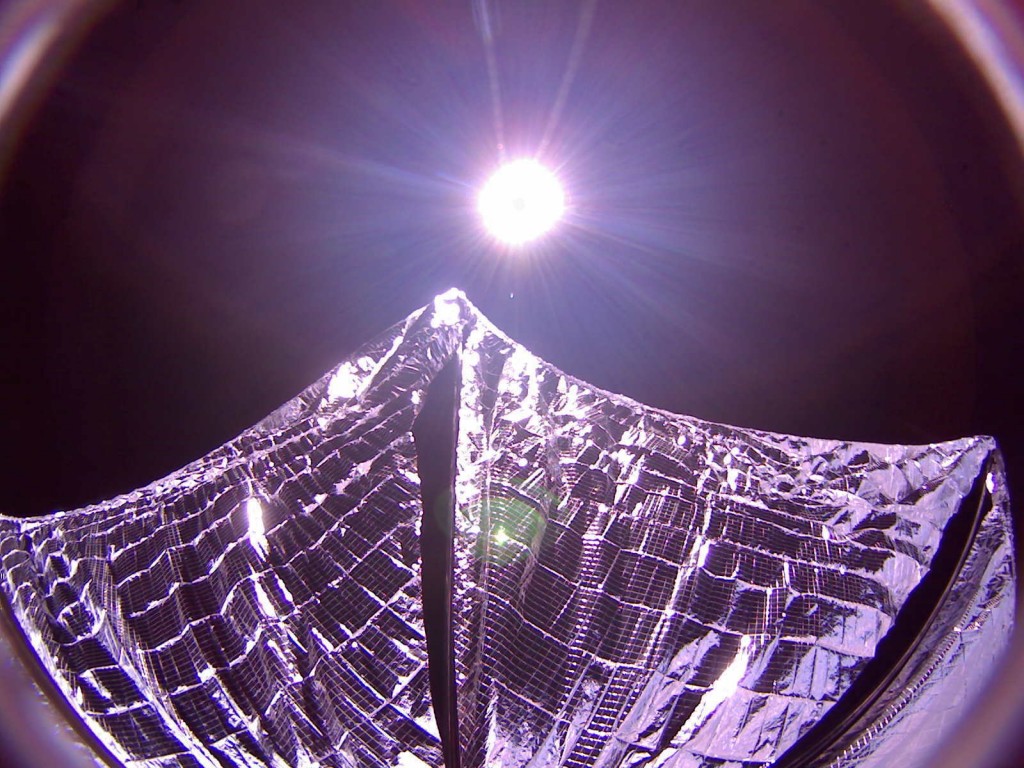 A camera aboard LightSail, captures a shot of the sun and its own solar wings on June 8, 2015. Photo by The Planetary Society

This past Sunday the sails unfurled after finally bypassing a few early glitches. The researchers tried twice before to deploy the sails without success. A solar-powered-battery motor deploys the sails, but as a precaution, the batteries are designed to shut-down if they get over- or undercharged. During the first two attempts to start the motor, the batteries were offline.

The sails are made of a reflective material called mylar that is barely thicker than a spider web. The sun radiates energy via massless photons. When the sun’s energy, or light, reflects off the mylar sails, the small satellite is pushed forward. At first, the cubesat creeps at an incredibly tiny rate. In 2010, Japan’s first solar spacecraft IKAROS reported a push from the sun of 1/4,000th of a pound of force. But unlike the bursts that normally propel satellites using chemical fuel forward, the momentum from solar radiation is continuous and can accumulate. In other words, this technology may allow small satellites to travel even faster than they are traveling now.

Thomas H. Zurbuchen, an aerospace scientist at the University of Michigan, imagines that the “satellite could fly toward the sun,” much like a boat can sail into the wind. He said that by bending the sails to catch the sun’s energy at different angles, researchers can actually control the satellite’s direction.

Video by The Planetary Society

This recent test launch placed LightSail in Earth’s lower orbit, roughly 400 miles high in the sky. There, it faces “rocky solarwinds,” Zurbuchen explained. “The atmosphere doesn’t stop abruptly,” he said. Instead, atmospheric particles keep hitting the surface of the sails, drawing energy out.

The next launch, in summer of 2016, will likely set sail farther out in space where Earth’s atmospheric particles will have less force and allow for much smoother sailing. LightSail was funded by private citizens via a Kickstarter campaign, but the Planetary Society invites you to be even more involved in the next launch by sending your selfie to space.

Left: An artist's rendition of the LightSail sun-propelled mini-satellite floating through space. Photo by The Planetary Society