There’s a story living in your beer’s DNA

Dash Masland has a British fungus hanging on her wall. The fungus, framed in a picture, is beer yeast and the main ingredient in the farmhouse-style beer brewed in her Maine-based microbrewery. It is also her muse.

The marine scientist-turned brewer is fascinated by the yeast that gives each beer its unique flavor, and she has turned the DNA of that yeast into art. Using samples from 16 breweries, she has created 20 different photographs showcasing distinct strains of beer yeast DNA. Each picture represents a sort of genetic fingerprint of a different yeast strain. The colors used are a stylistic interpretation of that brewery’s culture.

And each photograph tells a story of its host brewery. Some breweries reuse yeast for decades, while others buy fresh yeast for each batch, Masland said. Older yeast has had more opportunity to mutate compared to a newly-purchased yeast. In the images, mutated DNA appears blurry and smeared, while the younger DNA looks sharp and crisp. Masland’s collection captures these genetic anomalies.

“You can see a bit of the story of every brewery in the imagery,” she said.

“I felt humbled,” he said. “It brought home the fact that my yeast is a living culture and that we are harnessing another organism to produce something that is good.”

Consider the photograph of the beer yeast DNA from Gritty McDuff’s Brew Co., the second craft brewery in Maine since prohibition. Masland’s photo of Gritty’s yeast DNA has a light gold background with a green smear, likely reflecting the brewery’s older, mutated ringwood yeast. Ed Stebbins, who co-founded the brewery in 1988, says the ringwood ale yeast sample in the image has been used in at least 5,000 batches over the course of 28 years.

He recalls the first time he saw Masland’s photograph of his brewery’s yeast DNA:

“I felt humbled,” he said. “It brought home the fact that my yeast is a living culture and that we are harnessing another organism to produce something that is good.”

Stebbins describes the relationship between a brewer and his yeast as “symbiotic – one cannot survive without the other.”

“Legend has it that our yeast came from Hull and Yorkshire England and was specifically developed by monks in the year 500 AD,” Stebbins said. Most of Gritty’s brewmasters have been there since its founding. 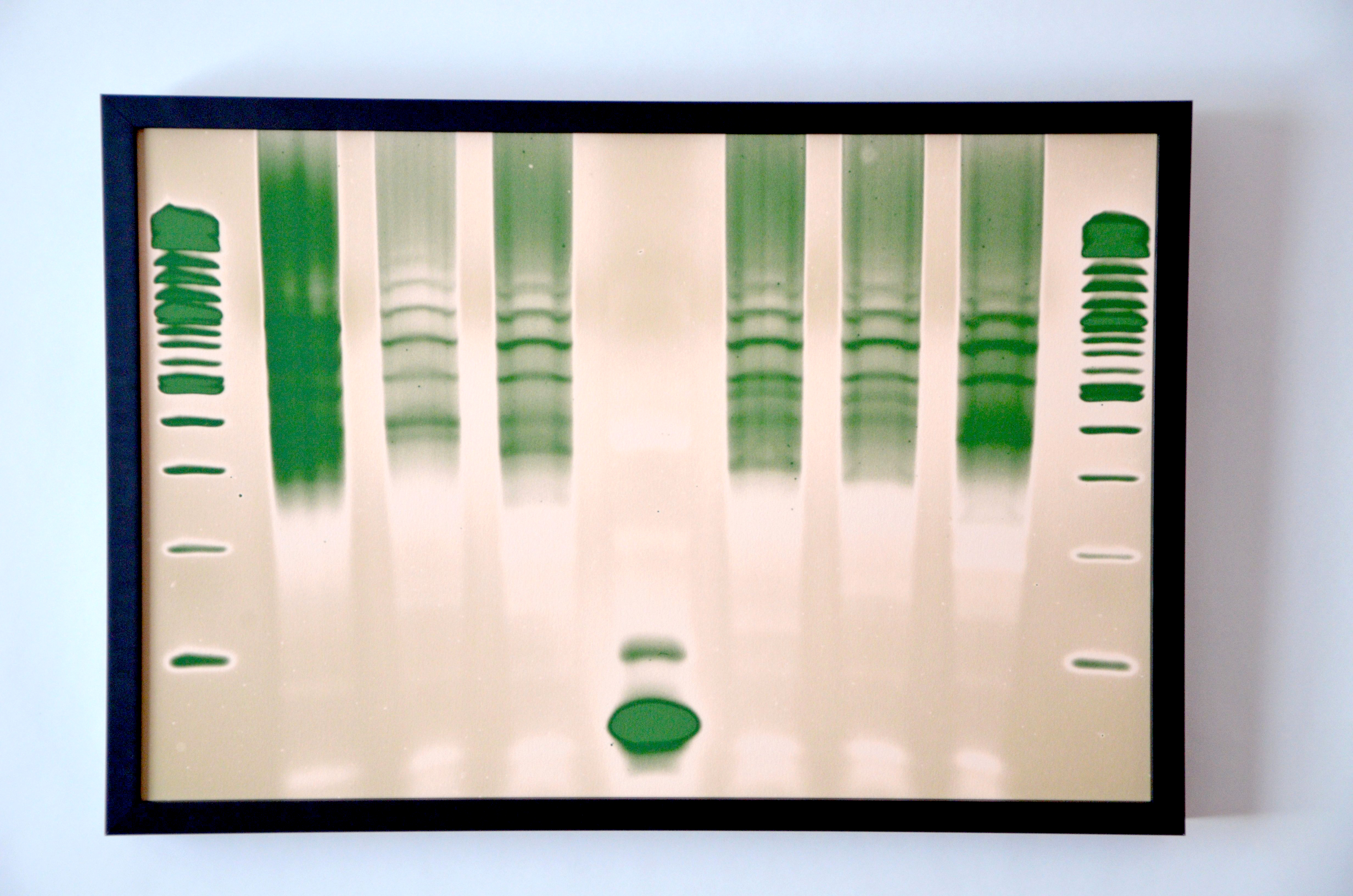 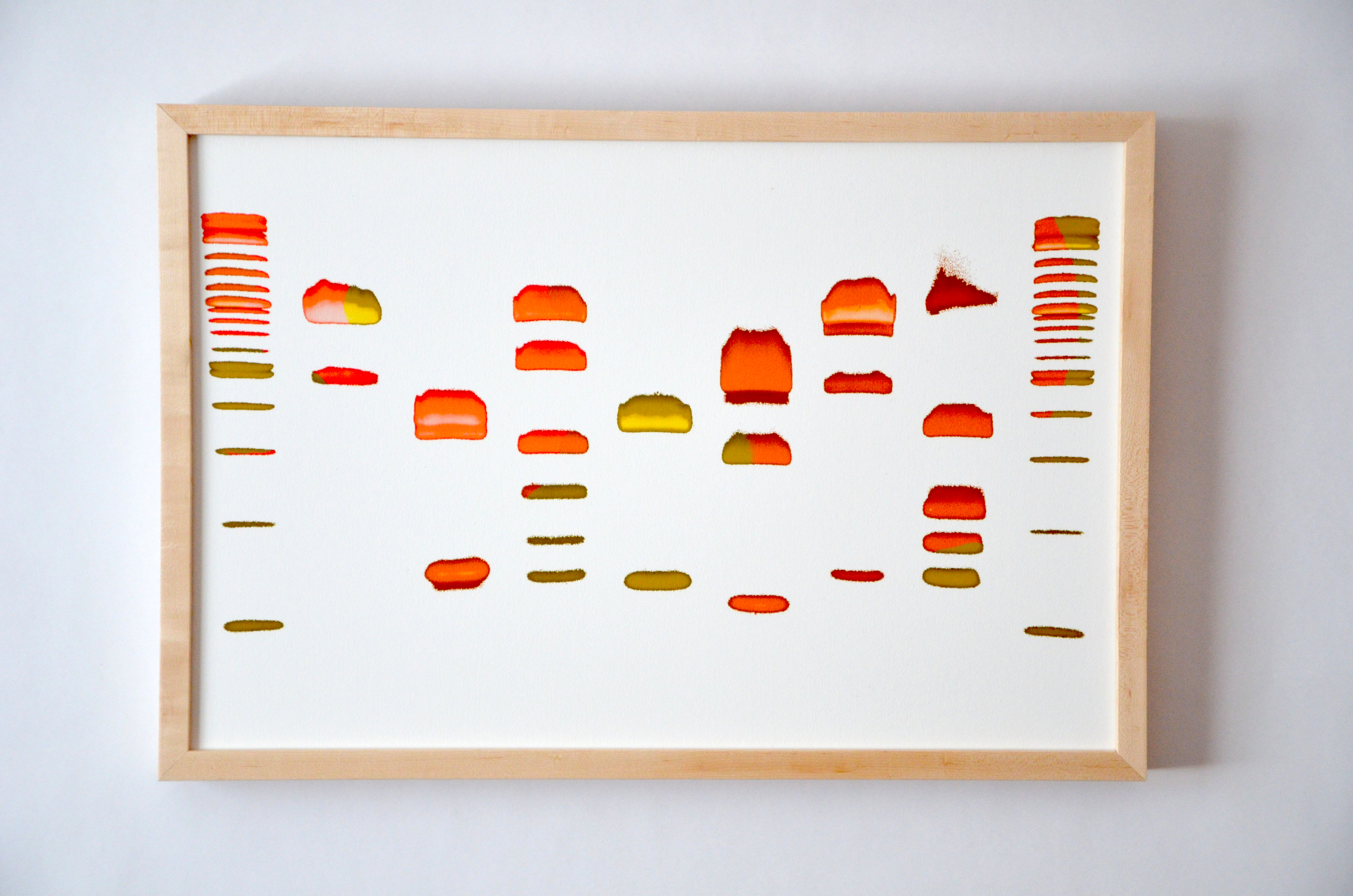 On the other side of the spectrum is the younger Austin Street Brewery. The photograph of its yeast DNA contains distinct orange-yellow splashes against a clean white background. The lack of column-like smears indicates a DNA that is young, with little mutation. Jake Austin, founder of the one-year-old old brewery, calls it “fresh and funky.”

Starting as a garage hobby, Austin’s ambition to go pro was driven by a desire to experiment with emerging yeast strains. Austin buys his yeasts from The Yeast Bay, a San Diego based company developing experimental yeast blends. “We don’t like to latch on to one strain,” Austin said.

But let’s back up. Understanding Masland’s images requires some understanding of the brewing process.

A simplified science of brewing beer

The basic ingredients used to brew beer are water, grain and yeast.

The fundamental steps of the brew process are always the same – mill, mash, boil, and ferment. Milling refers to the first phase of the process: roasting and grinding the grains. During the second mash phase, starches are converted into sugars by soaking the crushed grains in warm water. Filter away those grain remnants, and you are left with a sugary liquid called wort. After you boil and then cool the wort, you add the yeast. 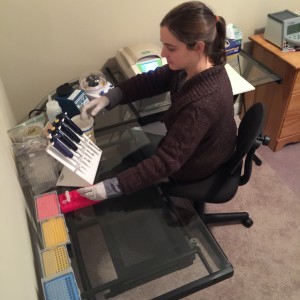 A photo of Dash Masland in her lab, built from used equipment purchased off ebay. Photo by Geoff Masland

Yeast is a living organism no bigger than a red blood cell. It gobbles up sugar in wort and produces alcohol and carbon dioxide — that’s fermentation. There are more than 500 different yeast strains. The two most common for brewing ales and lagers are Saccharomyces cerevisiae and Saccharomyces uvarum, respectively. Brettanomyces is the wild child in the yeast brewing family. Known as “brett,” this species of yeast is more popular among experimental craft brewers. Each yeast converts different sugars at different rates, contributing to the brew’s flavor.

Saccharomyces cerevisiae, or ale yeast, is generally a top-fermenting yeast, meaning that the cauldron of wort is exposed to open air. A gurgling cloud bubbles up as the sugars are devoured. The open container allows wild yeasts in the air to enter the fermenting wort. Ales are fermented fairly fast at warmer temperatures. The result – flavorful witbiers, Indian pale ales, oatmeal stouts, barley wines and more.

Saccharomyces uvarum, or lager yeast, is generally a bottom-fermenting yeast, meaning the closed container forms a yeasty mass at the bottom of the wort pot. Lagers stew for longer and at colder temperatures. The results – crisp pilsners, doppelbocks, oktoberfests, and dunkels.

Brett is often used in conjunction with other yeasts. Bretts can chew on different sugars than the other strains, resulting in more ‘funky,’ ‘barnyard’ or even sour flavors.

It was an unlikely path that brought Masland to the founding of her own Oxbrow brewery. As a young scientist, she focused on grey and Hawaiian monk seals, and studied the animals’ DNA, which she extracted from their tissue and fecal matter. But a diagnosis of Lyme disease crippled her immune system and derailed her scientific career. It was during her eventual recovery that she opened the small business with her husband and a close friend on their rural property in Maine. She found that she loved running a brewery, but missed the science. 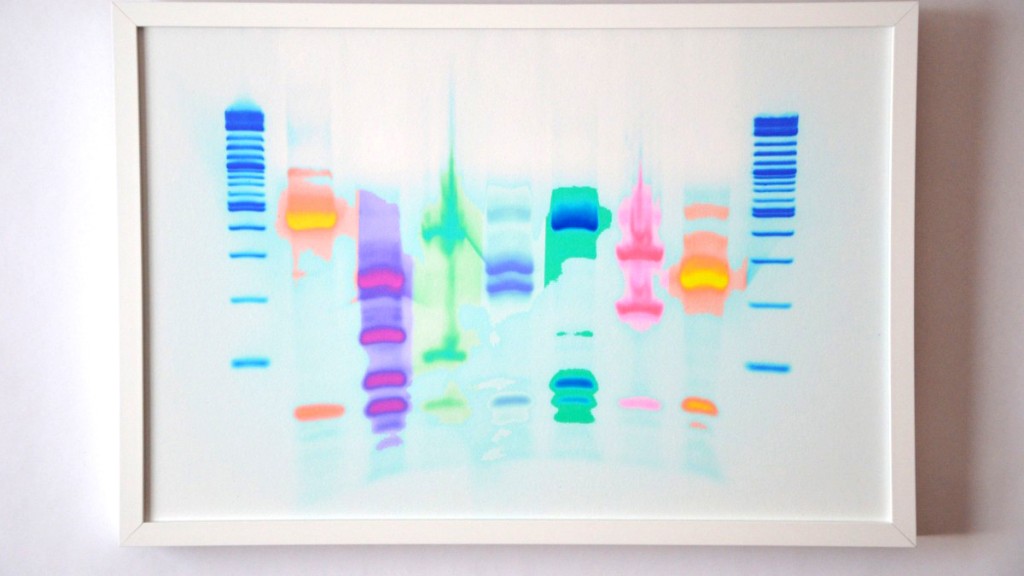 It was through art that she found a way back to the lab bench.

The first step of Masland’s artwork requires obtaining a genetic barcode for each individual yeast. This allows her to see the DNA segment under ultraviolet light. To do that, she relies on a biochemistry technique called polymerase chain reaction. Remember, DNA is the double helix structure that serves as the genetic blueprint for all of our cells, and it’s made up of a sequence of molecules called nucleotides. Some portions of DNA are more telling than others. For her artwork, Masland focuses on a specific segment of DNA that can vary among yeast strains — she calls it “a yeast barcode.” 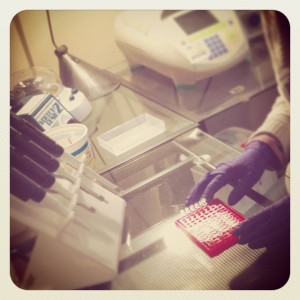 Imagine a DNA helix as a zipper, with each metal tick serving as a different nucleotide. When you heat up DNA, the helix unravels into two strips — think of the zipper unzipping — exposing each nucleotide. But Masland is only interested in a few of those exposed nucleotides, and she uses something called a primer — an artificial sequence of DNA — to latch onto them. The primer covers only part of the exposed DNA – a partially zipped-up zipper.

A protein called Taq DNA polymerase cozies up to the primer and begins pulling nearby floating nucleotides and attaching them to complete the zipping of the zipper, creating a complete double strand of DNA. This newly formed double strand of DNA is now tagged with a primer. In other words, we’ve inserted a barcode. Millions of copies are made — enough for the naked eye to see that barcode.

Visualizing the yeast DNA requires scanning this barcode. The barcode reacts with a gel so that it fluoresces under UV light.

“Finding an unusual and beautiful way to bring [the science] back into my life has been one of the most fulfilling things for me ever,” Masland said. “It is incredible. It is finally bringing all the components of my life together.”

The image she created for her own Oxbow brewery features vibrant, playful colors: pinks, purples and blues, and those colors reflect the character of the brewery, she says. It prides itself on being part of the local art community. Walls on the property are designed with graffiti art. Annual festivals on site foster creativity. Fruit from their garden and well water are used in their brewing process.

The brewery’s motto fits both the culture of the brewery and its rural origins: “Loud beer from a quiet place.”

Masland’s collection will be featured at the Summer Session Beer Festival in Portland, Maine on July 25th. You can also see Dash’s artwork at her website: http://www.dashmasland.com/

Editor’s Note: This article was updated to provide more detail on the brewing process.

Above: A photograph from Dash Masland's art display "Beer DNA," visualizing the DNA of yeast used to brew beer. Photo by Dash Masland