Indigo dye for clothing is a lot older than the invention of blue jeans — almost 6,000 years older, to be exact.

Scientists have found Andean cotton fabric from Peru with traces of the popular dye, according to new research in the journal Science Advances. The team behind the discovery say this blue scrap of fabric may rewrite the history of clothing.

“This finding forces us to see the history of the ancient Americas is our history too,” Jeffrey C. Splitstoser, an anthropologist at George Washington University, told the NewsHour.

The artifact was recovered in Huaca Prieta, a coastal settlement in the Chicama Valley of Peru. Archaeologist Junius Bird first excavated the site in the 1940s. He found that the prehistoric village was big on textiles and created the oldest known cotton fabrics with recognizable patterns in the Americas. Bird noticed a blue shade in a few woven goods, but could not confirm if it was actually indigo.

That’s where Splitstoser entered the fray. 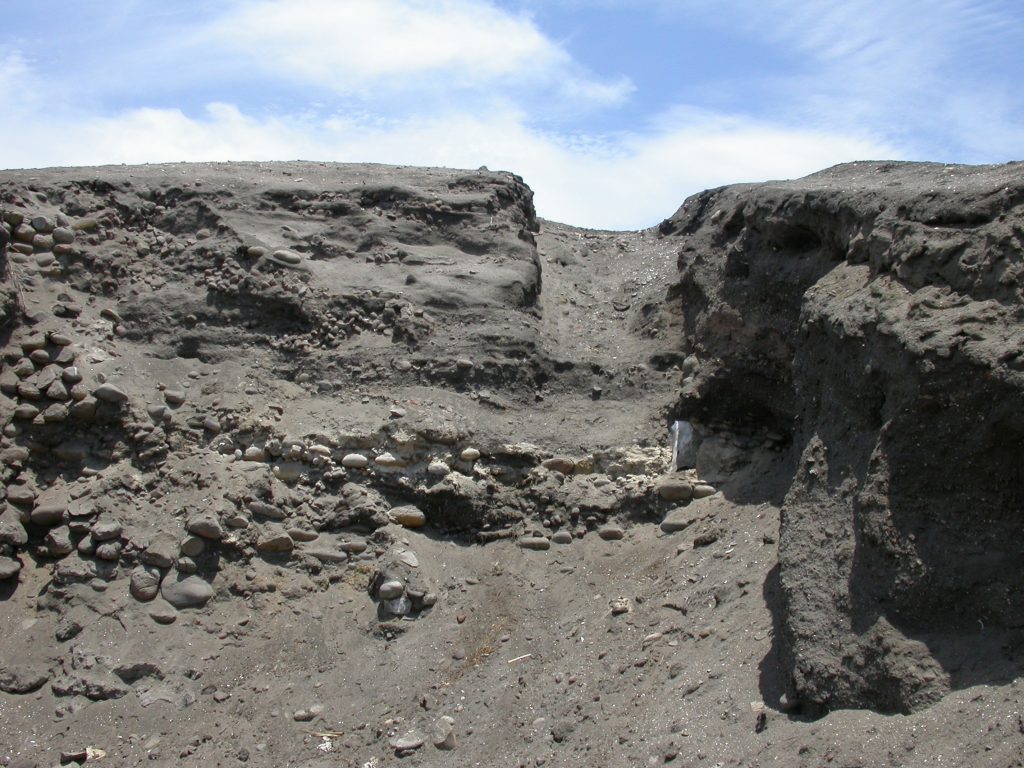 Trench dug by Junius Bird in the late 1940s. Textiles are visibly embedded in the mound. Photo by Jefrey C. Splitstoser.

He visited Huaca Prieta and examined the fabrics in question with chemist Jan Wouters of University College London. Taking pieces of blue yarn from ancient blue-striped fabric and other textiles, they analyzed the samples and found indigotin, a plant-based indigoid dye. Before this discovery, the earliest known use of indigo was in ancient Egypt 1,500 years later.

“Discoveries like this one in Peru help us gain a better understanding of humanity’s’ evolving relationship with color – how civilizations have created, applied and manipulated color in their environments,” said Jennifer Cohlman Bracchi, reference librarian at the Smithsonian Design Museum and curator of the “Color in a New Light” exhibit at the Smithsonian National Museum of Natural History. “This relationship should be considered just as insightful about a culture as studying their architecture, writings, and artifacts.” 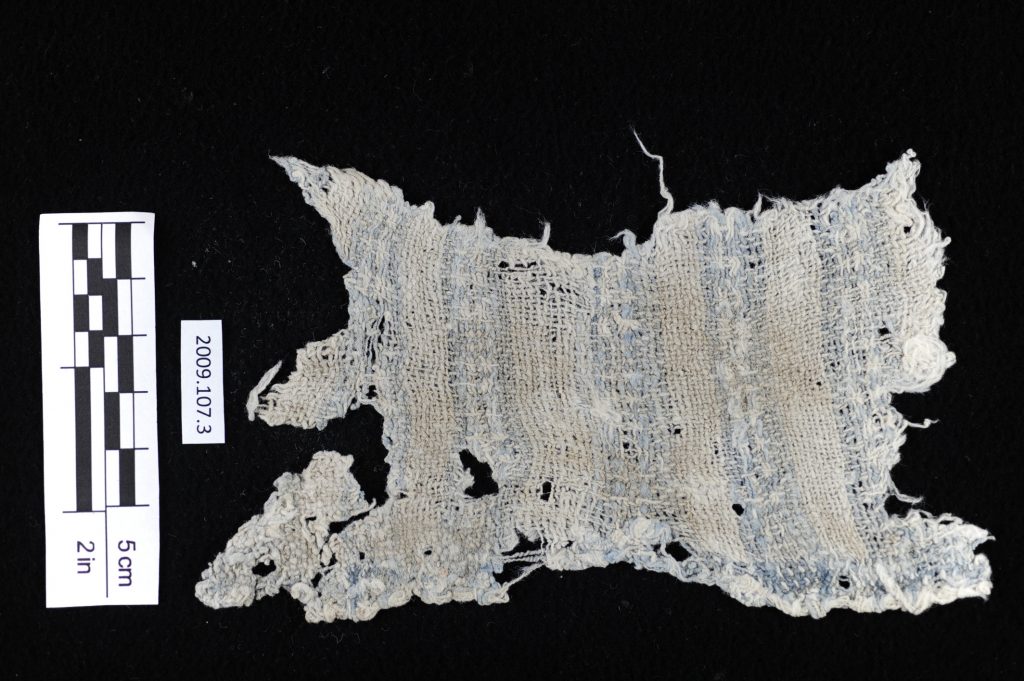 Cotton plain weave with indigo blue yarns forming a warp stripe on one edge and weft bands with a float patterning for a 6,000-year-old artifact. Photo by Lauren Urana

Splitstoser said cotton would not be a staple fabric for our t-shirts and blue jeans without innovations like this one by pre-Hispanic farmers of Huaca Prieta settlements. They domesticated cotton almost 8,000 years ago, and we still wear hybrids of those cotton plants today — even if the indigo dye we use now is synthetic.

“We tend to be Eurocentric in our view of history, seeing a direct line from the ancient Greeks and sometimes the ancient Egyptians and the ancient Middle East to us, and we treat the histories of Africa, Asia and the Americas together as separate evolutionary history,” Splitstoser said.

But other textile experts have split opinions over the discovery and its place in humanity’s color timeline. 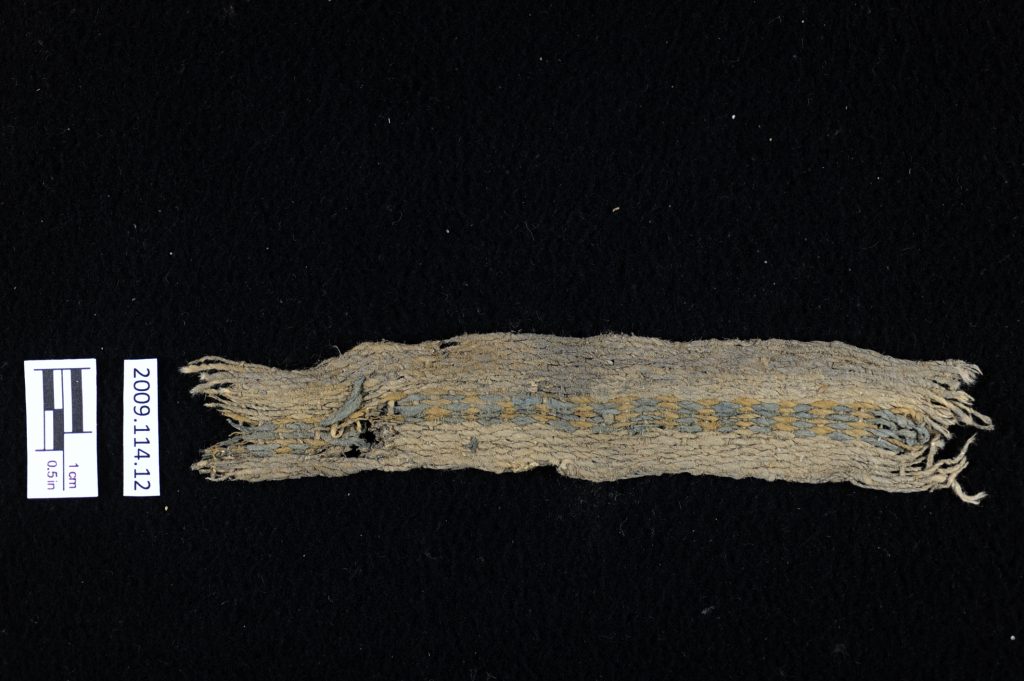 6,000-year-old, all-cotton band made of warp-faced plain-weave band with a decorative stripe down the center that is two-color complementary-warp weave in indigo blue and gold iron oxide (ochre). Photo by Lauren Urana

Susan Brown, textile curator at the Smithsonian Design Museum, told the NewsHour that these findings do not radically change the facts of human history. She said that cave drawings almost 40,000 years old used colors, and the reason we don’t have examples of older textiles is that they are biodegradable.

Andrea Feeser, art historian and author of the book “Red, White, and Black Make Blue: Indigo in the Fabric of Colonial South Carolina Life,” agreed. She told the NewsHour that most of the existing research on indigo — including that different cultures developed the dye independent of one another — would still stand. But the culture behind the history of this dye could shift.

“The authors begin their article by noting that the Spanish who colonized much of the Americas were almost as taken with Inca tapestry cloth as with gems and metals,” Feeser said, “This framing device is instructive: Value is first cast in the terms and context of Western empire.”

With the growing number of Latino immigrants to the United States, Splitstoser said we need to recognize the influence of their culture on our own.

“Indigenous South Americans were sophisticated dyers, weavers and farmers who were the first people known to have grown and woven cotton and used indigo dye to decorate it,” he said. “The Old World does not have a monopoly on technological or agricultural achievement. Some advancements were made in the New World first.”