Allen: Well Not Yet Killed, BP Will Move Forward With Relief Well 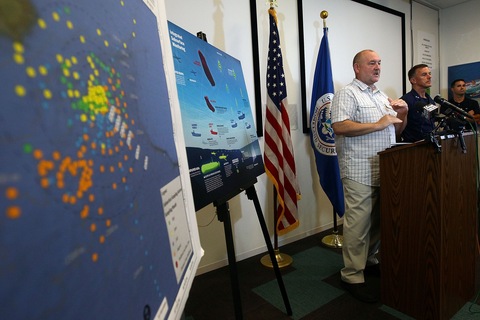 Updated 3:34 p.m.
National Incident Commander Adm. Thad Allen said Friday that the blown-out oil well in the Gulf of Mexico is not yet dead, and that BP will proceed with a relief well to permanently kill it.

“Everyone agrees we need to move forward with the relief well, but the question is how to do that,” Allen told reporters.

He said that pressure tests have shown that pressure in the well has remained fairly steady since the “static kill” operation last month that pumped in mud and cement from the top of the well through the well pipe. The steady pressure readings indicate that some of that mud and cement entered the reservoir and came back up through the annulus — the area between the pipe and the outside of the well that the relief well was meant to plug.

But Allen said Friday that engineers don’t know the thickness or strength of the layer of cement currently plugging the annulus. So they can’t consider the well permanently plugged, and must move forward with the relief well.

At the same time, they have to proceed carefully with the relief well “bottom kill” — pumping in mud and cement from the bottom of the well could force up oil and mud now trapped in the annulus, and they don’t want to increase the pressure too much at the top of the well.

“That’s the essence of the discussion that’s going on right now,” Allen said.

Louisiana Gov. Bobby Jindal, who attended a meeting with Allen and other officials Friday, told reporters at a press conference that he was glad the work on the relief well would continue.

“If it’s a nearly redundant safety measure, that makes sense to us,” he said, according to the Associated Press.

Updated 10:06 a.m.
Officials hope to know early Friday if BP’s oil well in the Gulf of Mexico has been sealed for good. Retired Coast Guard Adm. Thad Allen, the federal government’s person in charge of the effort, scheduled a news conference for 1:45 p.m. EDT to give an update on the operation.

On Thursday, Allen said it was possible that a final fix, known as a “bottom kill,” will not be necessary. After a temporary cap was placed on top of the well last month, heavy drilling mud and cement were pumped in from the top in what is called a “static kill.”

“We may be the victims of our own success here,” Allen said on Thursday. “If the cement is already there it would obviate the need to do the bottom kill.”

An analysis of tests on the well done Thursday was scheduled to be completed Friday. Workers tested pressure levels in the space between the inner piping and outer casing. Rising pressure means the bottom kill still needs to be done, Allen said. Steady pressure may mean cement already has plugged the space.

Allen said there is concern that pumping more mud and cement would increase pressure inside the well, sending oil up the well column, damaging the blowout preventer and escaping into the water.

In two separate suits, Attorney General Troy King seeks unspecified damages. A BP spokesman said the company had not seen the lawsuits and could not comment.

The Mobile Press-Register also reports that a spokesman for Alabama Gov. Bob Riley said that Alabama should have first presented its claim before suing and that King “was too quick in filing the lawsuit.”

Michael Bromwich, the Interior Department’s new offshore-drilling chief said that the agency had relied too much on the oil and gas industry it was supposed to police, reports the Wall Street Journal, setting the stage for a regulatory revamp.

The Washington Post reports on how the Coast Guard is facing difficulties fighting oil spills in a post-9/11 world:

“Its work in such high-visibility missions accelerated after Sept. 11, 2001, when Congress swept the Coast Guard into the Homeland Security Department. More funding followed….But the changes had the unintended consequence of lowering the profile of the Coast Guard’s vital programs related to oil.”

Lastly, American Public Media’s Marketplace shows how the oil disaster in the Gulf has inspired a string of anti-BP t-shirt designs.

“A lot of these shirts are decrying the environmental damage that this oil spill has done. But I wonder: Aren’t the t-shirts themselves having some environmental impact here?”