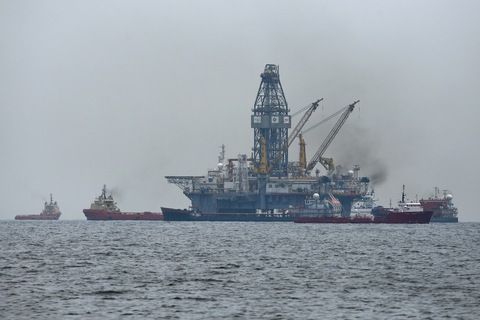 Updated 12:46 p.m. ET | BP said Sunday morning that tests on a 75-ton containment cap holding back oil from flowing into the Gulf of Mexico showed no problems and that the company hopes to keep the cap closed until a relief well can be completed in a few weeks.

“We’re hopeful that if the encouraging signs continue, we’ll able to continue the integrity test all the way to the point that we get the well killed,” BP Chief Operating Officer Doug Suttles told reporters.

Suttles said the company has not found any leaks during its two-and-a-half days of testing on the cap, according to the Washington Post. He said pressure inside the well continues to rise at about 2 psi an hour, yet it wasn’t as high as first expected: 6,778 pounds per square inch, instead of the anticipated 8,000 or 9,000. But, that could be because the Macondo well has been leaking for so long.

“We need to be careful in predicting how long it will go,” he said of the test. If any problems arise, BP could resume collection in several hours.

The news from Suttles differs from the plan announced Saturday by Coast Guard Adm. Thad Allen, who extended the test on the cap for an additional 24 hours, but also said oil collection by surface vessels would resume when the test period ends.

Allen released a statement Sunday afternoon about the latest developments:

Per my conversation with BP Executive Bob Dudley as recently as 11 a.m. EST today, nothing has changed about the joint agreement announced yesterday between BP and the US government. The ongoing well integrity test will continue until 4 p.m. EST today, with the potential for additional extensions in 24-hour increments. As a condition of the extension, the US government has required significant new monitoring and periodic evaluation and approval by our science team.

Work must continue to better understand the lower than expected pressure readings. This work centers on two plausible scenarios, depletion of oil from the reservoir and potential leakage caused by damage to the well bore or casing.

While we are pleased that no oil is currently being released into the Gulf of Mexico and want to take all appropriate action to keep it that way, it is important that all decisions are driven by the science. Ultimately, we must insure no irreversible damage is done which could cause uncontrolled leakage from numerous points on the sea floor.

[O]n Sunday, Suttles said that the process of fitting the well with those pipes would have allowed oil to flow into the gulf for perhaps three days. Instead, he said, the “test” of the closed cap would continue indefinitely. A BP spokesman said the decision was made in consultation with the government, and that Allen has the authority to have the well opened if he sees the need.

If the well remains closed, it’s possible that a final flow rate for the amount of oil that has been spilling into the Gulf of Mexico will never be known. The latest estimates put the flow rate at between 35,000 to 60,000 barrels a day.

With no reported signs of oil leaking, the NewsHour halted its Gulf leak meter on Thursday. The meter will remain paused until a further development.

Higher pressure inside the containment cap is viewed as a positive sign since a drop in pressure might indicate oil and gas could be escaping into a formation below the Gulf floor, and might escape through a fissure.

“We’re just taking this day-by-day,” Suttles said. “And it could be that we’re taking it day-by-day all the way to the point we get to the well killed.”

Suttles said the closest relief well is more than 17,000 feet below the sea floor, just 100 feet vertically and four feet laterally from the point it needs to reach:

That relief well could hit its target by the end of this month, he said, though the process of “killing” the well might last until mid-August.

BP said its next update on the Gulf oil disaster will likely be around 10:30 a.m. ET Monday. Find all of the NewsHour’s oil coverage right here.