Watch all the debates 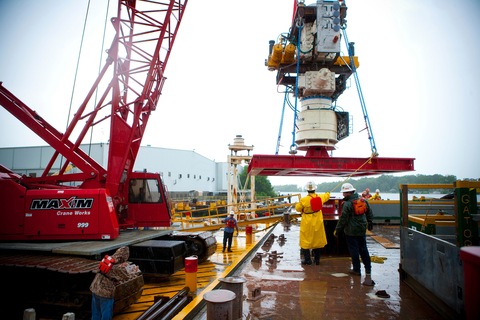 BP again plans to ramp up testing of its newest well cap system Thursday. The multi-stage test, which will take 48 hours, will determine the company’s next step in its attempt to control the leak.

If pressure tests show that the well’s integrity is solid, engineers might be able to leave the cap closed, effectively sealing in the oil until the relief wells can stop it for good. In another scenario, BP could connect pipes from the cap to a four-vessel oil and gas processing system, which BP says has the potential to process up to 3.4 million gallons (80,000 barrels) of oil per day — higher than the current upper-end government estimate of the oil flow, which is 2.5 million gallons (60,000 barrels) per day.

“No matter what comes out of this operation, we’re going to be in a much better position than we were before,” Coast Guard Adm. Thad Allen told reporters in a briefing Thursday.

But Allen also clarified that the system was never intended to be a permanent solution to seal the well — instead it was designed to be an improved system to bring oil to the surface vessels for processing. If it is able to temporarily seal the well until the relief wells are finished, that would be a bonus.

“The priority was to contain and stop the flow of oil,” Allen said, “but the design of the cap itself, if it can withstand the pressures and the well bore stays intact, presents the opportunity to shut the well in [ …] so it’s a two-for if we can do it.”

Testing on the new system has already hit some bumps. It was set to begin Tuesday, but government officials asked for a 24-hour delay to review concerns that the tests could further damage the well.

It began in earnest Wednesday night, when remote-operated underwater robots finished installing the tight-sealing cap, called the “capping stack,” on top of the well. The 30-foot-tall cap sits atop the old blowout preventer at the top of the well. It has three hydraulic valves that can slowly be closed to seal off the well. It can also attach to two lines — the “choke” and “kill” lines — that can funnel oil to the surface.

Meanwhile, two pipes attached to the blowout preventer also run to the surface — they have been funneling oil to two processing ships for several weeks. (The New York Times has a useful graphic of the system.)

In order to test the new system, engineers need to sequentially close off all of these escape routes for the oil. On Wednesday, engineers first took the two pipes connected to the blowout preventer offline, then began sealing the top of the capping stack, as well as the choke and kill lines. But as they did they discovered a leak in the choke line and had to stop the test.

On Thursday morning, Allen said the leak had been repaired and the test would continue as planned. It will take 48 hours, in six-hour increments. Engineers will close the top of the cap, then the kill line, then slowly close the choke line. As they do they’ll take pressure readings inside the well. They’ll be looking to see if the pressure increases — if it does, that will mean that the well bore, which extends 13,000 feet below the sea, is holding steady. But if the pressure doesn’t rise, that will mean that cracks or other damage to the well bore could be allowing the oil to leak out elsewhere. Scientists will also be using acoustic and sonar tests to monitor the condition of the well.

In news press conference, Allen compared the test to using a thumb to stop the flow of water from a garden hose — if the pressure remains the same at the top of the hose, then that means that water is escaping from it elsewhere.

Even if the pressure readings indicate the well is intact, engineers will still reopen the flow after 48 hours and conduct seismic tests of the well area. Then, depending what those tests reveal they may decide to seal the capping stack, or use it to bring oil through the kill and choke lines to another ship at the surface.

Meanwhile, all of these systems are temporary solutions designed to control the oil until a relief well is finished, which BP hopes will be by early August. Allen said in the briefing that the primary relief well is about 100 feet above the point at which it will intersect the well bore, and about 4 to 5 feet away. However, BP has temporarily suspending the drilling during the capping stack test — it will resume when the test is complete.

Disney to lay off 28,000 at its parks in California, Florida

The pandemic will likely make America’s eviction crisis even worse

How COVID-19 is changing the English language

By Roger J. Kreuz, The Conversation