Can your ‘brain fingerprint’ reveal how smart you are?

You’re special. You’ve harbored such thoughts ever since becoming self-aware. It’s an internal inkling that your mind is unlike the ones sitting next to you on the subway. Now, a new study from Yale University has pinpointed a way to identify this uniqueness. By using scans of brain connectivity, the researchers have isolated “brain fingerprints” that can distinguish you from another person with 99 percent accuracy.

Moreover, the team has used this research to create a Harry Potteresque sorting hat. The team showed how brain fingerprints could be used to predict intelligence, and by doing so, they raise the idea of using these mental scans to predict future behavior.

“It brings a slew of ethical issues. With this technique, you might do a brain scan of a person that you’re interviewing for a job to find out if they’ll be a hard worker or diligent or to assess their people skills,” said Peter Bandettini, chief of functional imaging methods at the National Institute of Mental Health who wasn’t involved in the work. “The work is important because it represents one of the holy grails of functional magnetic resonance imaging (MRI).”

Not all MRI is the same. Structural MRI, for instance, maps physical architecture, like a bundle of nerve fibers running between two regions of the brain. It’s easy to draw conclusions about a single patient with structural MRI. What you see is what you get. Functional MRI, in contrast, looks at brain activity and how the mind responds to tasks like reading or listening to music.

Traditionally, researchers have had to compare functional MRI scans from multiple people — usually huge groups — to make inferences about how the brain works. Person A reads faster than Person B, and oh look, these parts of Person A’s brain light up with more intensity.

“While structural MRI has been used all the time in medicine, functional MRI hasn’t been used much at all, mostly because it’s been really hard to get useful information out of a single scan,” said Emily Finn of Yale University, who has now uncovered a way to make functional MRI more individualistic.

To do so, Finn and her colleagues combed over a large batch of brain scans from the Human Connectome Project. Launched in 2010, this huge project is investigating how the brain is wired by comparing the MRI scans of 1,200 healthy adults with their genetics and behaviors.

The Yale study, published today in Nature Neuroscience, looked over the data of 126 participants that were scanned over two days while either resting or performing tasks that challenged their cognitive abilities, such as working memory, emotional state, language and motor skills. During each scenario, they monitored how 10 brain networks sprung to life with activity. 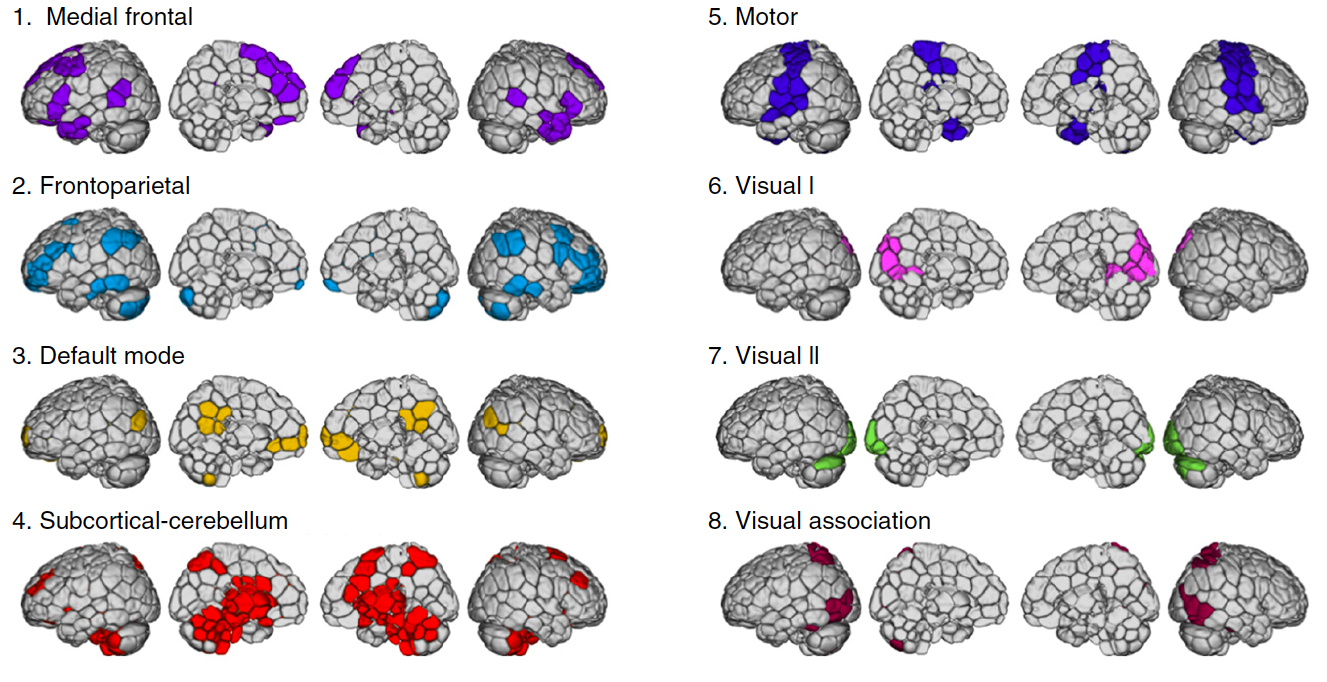 The team looked at 268 nodes in the brain that were grouped into 10 functional networks. Photo by Finn et al., Nature Neuroscience, 2015

“The fact that those were the two best wasn’t entirely surprising, because the prefrontal and parietal cortices evolved most recently,” Finn said. “We know that they’re involved in sophisticated functions, like attention, memory and language. The stuff that we think makes us human. As opposed to the lower-order areas that just control muscles or process the visual senses from the retina.”

Next, they wanted to show that these fingerprints are relevant to real world behaviors. They showed that these brain fingerprints could predict a subject’s fluid intelligence, which is the ability to think logically in a novel setting and solve an abstract problem without prior knowledge. Fluid intelligence is thought as an important predictor of academic performance. However, it’s tough to teach fluid intelligence, and an MIT study in 2013 showed that standardized tests can’t always assess this intrinsic trait.

The scientist behind that MIT study — John Gabrieli — said that new research like Finn’s may support better individualization of educational curriculum on a day-to-day basis.

“The major step here is that there are now methods to identify brain characteristics that are reliable across days and conditions,” Gabrieli said.

Brain fingerprints may offer an unbiased way to measure the progress of a student’s intelligence, so maybe in the future kids will get brain scans instead to taking the SATs. Bandettini said brain fingerprints could tell us about a subject’s personality, impulsiveness or comprehension.

But such purposes should be approached with caution, said Gabrieli.

“If we can predict from brain data how individuals will behave in the future in response to a school curriculum, behavioral [therapy] or pharmacological treatment for mental health, there is the risk that such knowledge will be used to select people for success rather than help those in need,” Gabrieli said.

But both Finn and Bandettini see a greater purpose for brain fingerprints with spotting mental disorders.

“I don’t think that the best application for this work is predicting intelligence. I think that the potential could be for things like who is going to develop a mental illness or who will respond to certain drugs,” Finn said. She is currently conducting a study on data from adolescents who were identified as having a high risk for schizophrenia.

“These kids either had a high genetic risk or showing worrisome behavioral symptoms, but it had yet to progress into full blown psychosis. They were scanned at this baseline state and followed for several years to see who ended up with full blown disease and who ended up being fine,” Finn said. “Our idea would be to see if we can use the baseline scan to predict who would go onto get the illness.”

That info might serve as a template that doctors could use to diagnose and treat these mental diseases before they strike, Bandettini said.

The study also provides new insights into what it means to be yourself, Finn said.

“We expected people’s brains to change a little based on what task their doing. And these tasks do change the brain to some degree, but they never make you look like someone else. Your [brain] always sort of looks like yourself regardless of what you’re doing,” Finn said.

For more on neuroscience, check out The Brain with David Eagleman, a new series premiering October 14 on PBS.

Left: This image shows the functional connections in the brain that tend to be most discriminating of individuals. Many of them are between the frontal and parietal lobes, which are involved in complex cognitive tasks. Photo by Emily Finn