The human scream triggers a range of emotions. It’s one of the few primal responses we share with other animals. Few sounds rank as powerful as the first cry of a newborn. But the shrieks of that same infant will one day rattle the nerves of fellow airplane travelers.

A new study shines light how our brains and bodies respond to this sound that grips and consumes us. Neuroscientist Luc Arnal of the University of Geneva and colleagues show that screams possess a unique sound property that exists outside the boundaries of human speech. Regardless of loudness or words used, this acoustic feature shocks our core fear centers. The study was published Thursday in the journal Current Biology.

All sound comes from the vibration of objects, whether these objects be drums or your vocal chords. The rate of vibration, known as frequency, determines the sound. When you hear a high-pitched squeal, you ears and brain are actually perceiving a sound with a high vibration rate.

Though two human voices can sound exceedingly different — think Gilbert Gottfried versus James Earl Jones — humans (and animals) use a limited set of sound frequencies when communicating. When biologists like Arnal measure these sound patterns — using a model for organizing the volume and frequency called a “modulation power spectrum” — they find that our speech isn’t erratic. Instead, it features a uniform melody of frequencies and intensities, which both people and animals use over and over when communicating — typically it’s “low sounds with fine harmonies.” In fact, all natural sounds fall within this universal range of noises.

Prior studies have shown that voices always use the same patterns of sound (left panel). Gender-related tones and intensities fall into their own realm (blue in left panel), while the meaning of our words lands in another (green in left panel). Screams produce an acoustic property called roughness that falls outside the bound of normal speech (brown in left panel), which scientists noted when a person screamed a sentence (middle panel) or recited it normally. Courtesy of Arnal et al., 2015, Current Biology.

But when Arnal examined these sound spectrums of sentences spoken or screamed by 19 adults, he noticed something unusual. Unlike talking, screams cycle through a high variety of sounds in a quick timeframe. The result is an acoustic phenomenon akin to an uncomfortable rattle, known as the zona incognita or “roughness”.

“Roughness is well known, but it has never been considered to be important for communication,” said Arnal said. “Our work is the first to show that roughness is useful to convey information, specifically about danger in the environment.”

Arnal’s team asked 20 subjects to judge screams as neutral (1 point) or fearful (5 points), and found that the scariest almost always corresponded with roughness. The roughest sounds made the scariest screams. (You can hear the ranked screams in interactive to the right).

The team then studied how the human brain responds to roughness using fMRI brain scanners. As expected, after hearing a scream, activity increased in the brain’s auditory centers — where sound coming into the ears is processed. But the scans also lit up in the amygdala, the brain’s fear center.

The amygdala gauges whether a threat is real, regulating our emotional and physiological response to danger. This is how it works: We get angry or aggravated. Our adrenaline rises and vision gets clearer. This study found that screams have a similar influence on the body.

“It isn’t explicitly stated anywhere that people should use roughness to create alarm signals. Sound engineers have been tapping into roughness by accident, just by trial and error.

“We found that roughness improves behavior in various ways,” said Arnal, such as by increasing a subject’s reaction time to alarms and refining their perception of sounds.

His team also found that roughness isn’t heard when we speak naturally, regardless of language, but it is rampant in artificial sounds. The most aggravating alarm clocks, car horns and fire alarms possess high degrees of roughness, according to the study.

“It isn’t explicitly stated anywhere that people should use roughness to create alarm signals. Sound engineers have been tapping into roughness by accident, just by trial and error,” said Arnal. 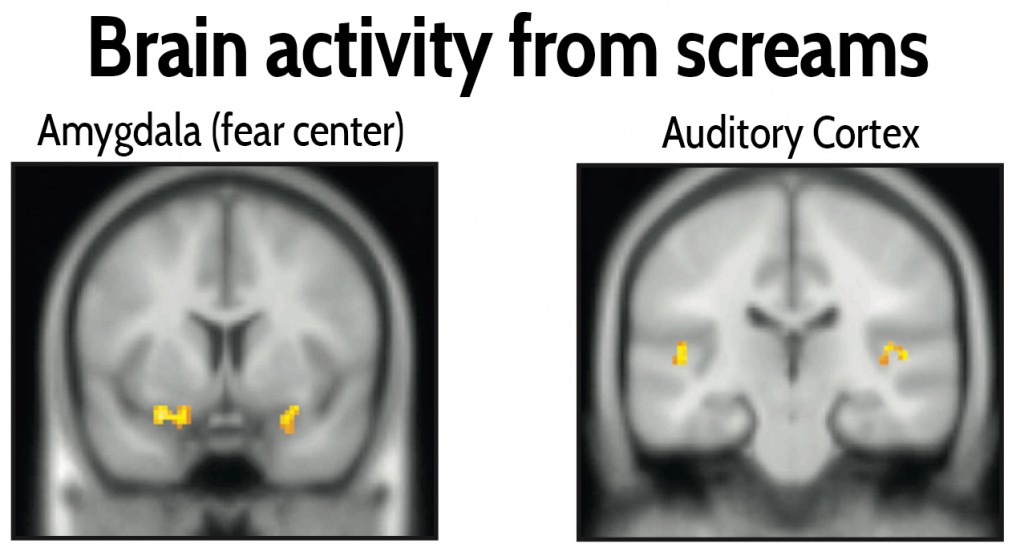 As expected, screams enter our ears and elevate brain activity on fMRI scans in our auditory cortex, which processes sound. But these shrieks also trigger our fear center, the amygdala, which may explain why they command our attention. Courtesy of Arnal et al., 2015, Current Biology.

The responses that roughness provokes extend beyond the purely negative. Some people enjoy the fear triggered by a bloodcurdling scream in a horror movie, for example. This is because stimulating the amygdala increases not only adrenaline, but also natural painkillers called endorphins that create sensations of pleasure.

“Dissonance is used a lot in rock music with saturated guitars, and we might add these unpleasant sounds because they move us,” Arnal said.

Left: A new study looks at the science of screams. Photo by Tara Moore/via Getty Images.