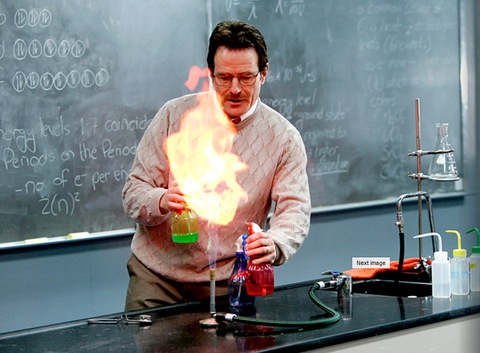 With “Breaking Bad’s” return to the airwaves and approaching series finale, we can’t help but pause to take a closer look at the science its creators have woven into so many of its episodes. (Attention: Spoiler alert!) Of course, there’s the unbridled pleasure we get from watching the latest Walter White-Hank Schrader showdown, Jesse Pinkman’s seemingly psychotic break into philanthropy, and also, every single thing about Saul Goodman. But we’ll especially be tuning in for Walt’s final moments of chemistry cunning, flawed genius that he is.

Because in “Breaking Bad,” chemistry is king, and that’s no accident. The show’s creator, Vince Gilligan, has taken many pains to get the science right. For example, there’s Donna Nelson, an organic chemist and University of Oklahoma chemistry professor, who serves as occasional adviser on the show. Nelson described to me her first meeting with Gilligan and his team of writers in Burbank, California:

“There were storyboarding cards up on the wall and pegged to the blackboard,” she recalled. “I went in and sat down and thought, ‘Well, I’m going to talk to Vince,’ and then all of the writers came in and sat around the table also. They all listened to me, watched the way that I spoke, talked with me for about an hour.”

She assumed they’d need to return to work after that meeting, but then an hour turned into lunch, which turned into another two hours, followed by regular discussions. They were observing her initially, she suspected, to better understand the mind and behavior of a chemist, she said. But her role grew over time.

For the show’s first season, she was asked to calculate the amount of methamphetamine that could be made from 30 gallons of methylamine. For season 2, she drew a diagram for one of Walt’s classroom chemistry lessons on carbon, instructed the writers on the nomenclature of alkenes, compounds that contain carbon-carbon double bonds, and fixed mistakes in the script — in places they’d mixed up alkenes with alkanes and alkynes, other families of compounds. (Her exact diagram made it onto Walt’s classroom chalkboard.) Later in season 4’s epic “Box Cutter” episode, she helped Walt challenge drug lord Gus Fring’s henchman and meth cook Victor, using complex chemistry dialogue to expose Victor’s scientific ignorance.

Before that initial Burbank meeting, she was reluctant to become involved with a show about making methamphetamine, she told me. A professor, after all, would never encourage students — or anyone — to make illegal drugs. But then she watched the early episodes that had aired.

“I thought, ‘Well there’s no way that this show is going to entice a student into the drug world,'” she said. “No one’s going to watch Walt get shot up and beat up and dragged around in his underwear, and think, ‘This is the lifestyle I want.'”

Here at the NewsHour’s science unit, we confess to a fierce allegiance to the show. Not long ago, our science correspondent [Miles O’Brien](http://www.pbs.org/newshour/aboutus/bio_obrien.html) and BoingBoing’s [Xeni Jardin](http://xeni.net/), [occasional NewsHour producer](http://www.pbs.org/newshour/updates/science/jan-june13/guatemala_05-08.html) and on-air guest, dug into the Breaking Bad vault to create this terrific video on their personal Top 11 Chemistry Moments. (You can see Jardin’s [post on Boing Boing here](http://boingboing.net/2013/08/13/video-top-11-chemistry-moment.html).)

It’s a reminder of the science you may have forgotten: the battery Walt built out of galvanized metals, brake pads and sponges soaked in potassium hydroxide while stranded with Jesse in the desert; the thermite he synthesized from aluminum powder rescued from several Etch-a-Sketches in order to bust through a lock; and of course, the hazards of using hydrofluoric acid to melt a body in a bathtub.

Which brings us to the other side of the equation. The show may embrace science, but it doesn’t always nail it.

Enter “Mythbusters.” When Gilligan opened Breaking Bad science to scrutiny by challenging the popular Discovery Channel program to take it on, its host Adam Savage stepped up mightily to the cause. Mythbusters tackled two of the show’s most memorable science moments: Jesse’s attempt to dissolve a body in acid, which resulted in liquified body parts raining from the ceiling.

And that time that Walt made an explosive bomb out of fulminated mercury and used it to blow up badguy Tuco Salamanca’s building.

To recreate the science, the Mythbusters team constructs its own house to code and builds its own throwing robot to explode its own mercury fulminate. They also don hazmat suits to soak a dead pig with massive amounts of acid in the middle of a California desert. “It’s like hell in a bathtub,” Savage is heard saying as a plume of smoke rises furiously from the pig and an unidentifiable fluid leaks from its flesh.

But my favorite part of the “Mythbusters’ Breaking Bad Special” is Savage’s lesson in acid chemistry and halogens. He identifies halogens, explains how the atomic number of each corresponds with its reactivity and then he reveals why hydrofluoric acid is actually less powerful than its brethren.

We won’t give away the verdicts reached by these insanely awesome Mythbusters experiments. But let’s just say, not every test goes exactly according to Gilligan’s plan.

And the Breaking Bad creator has two word for that: artistic license.