Around eight years ago, Shelby Hendershot’s cow, Aurora, gave birth to a calf named Trinity. Trinity is an apt name for a calf like her — she has only three good legs. Her left front leg has a shoulder blade and a tiny hoof, but no well-formed limb capable of walking.

“She gets around fine, despite her deformity,” Hendershot said. “And that kind of started the whole thing.”

Since Trinity’s birth, Hendershot has collected photos of deformed animals into a book project called “Livestock Born Different.” Many of the images come from a Facebook group she started in 2014, where farmers from around the world post pictures and videos of their differently-born livestock.

Contributors leave questions about their odd animals and, in some cases, sell the critters to Hendershot. So far, she has collected 98 dead specimens from U.S. farms as part of her ever-growing menagerie. 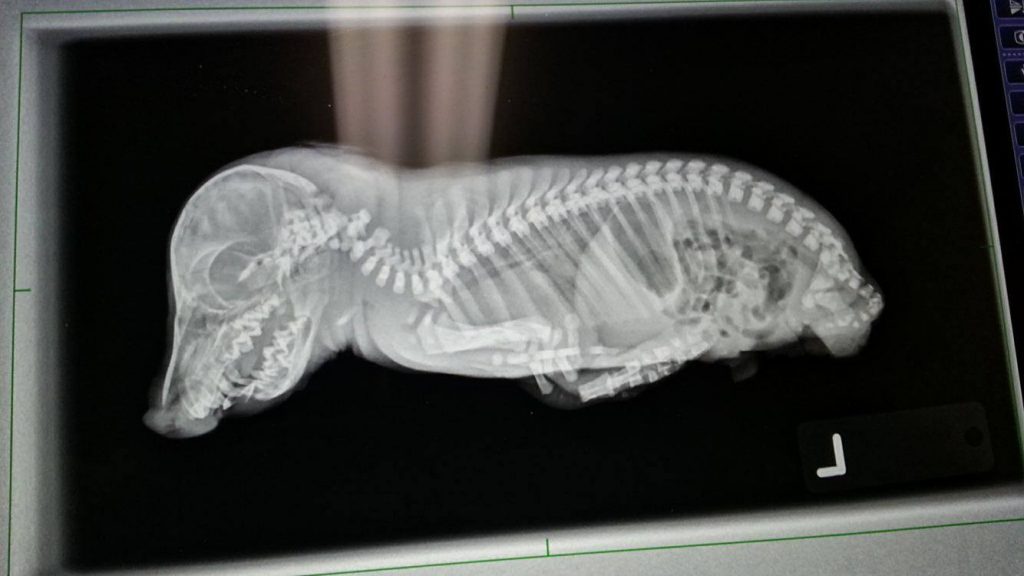 An X-ray image of a deformed piglet. Courtesy of Shelby Hendershot

“Say a sheep producer has a lamb born that has a leg deformity or a spine deformity,” Hendershot explained. “They’ll post it in the group and say ‘Hey, what causes this? Why does this happen? Is this something I should cull for, should I get rid of the ewe or should I give her another chance? Is this something I did, or did something accidentally happen?’”

Scroll through the Facebook page and you might find a calf with two faces, or a goat with six legs or a sheep with not enough legs. There are hairless rabbits and calves with backwards hooves. Ever want to see a pig with no eyes or one big eye in the middle of their face? Well now, you know where to go.

One calf had its brain growing on the outside of the skull, while another calf had a beating heart in its neck. Many are born dead or are culled shortly after birth to prevent a life of suffering. (Trinity, whose deformity is not fatal, is a living, healthy adult.) 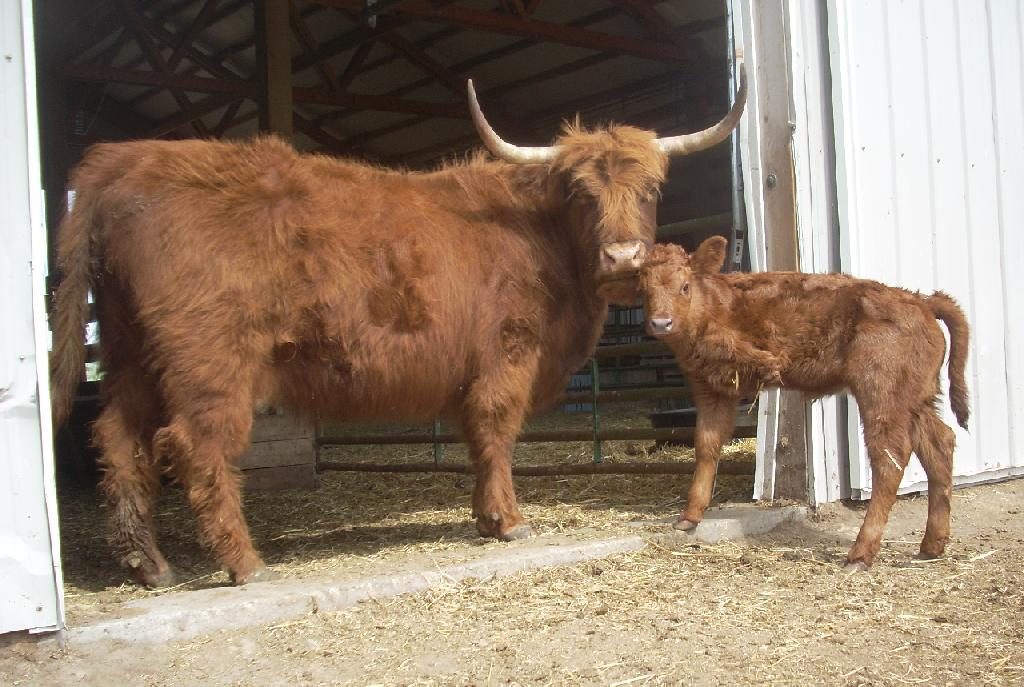 Aurora, a Scottish Highland Cow, and her calf, Trinity, who has three legs. Trinity is now eight years old and has had four-legged calves of her own. Photo courtesy of Shelby Hendershot

Hendershot thinks her book could aid veterinarians and farmers who want to understand mutations. Each page will contain descriptions of the deformity, explanations on how the deformity might affect the animal, and, if known, what causes the affliction.

In the past, Hendershot explained, there have been a handful of references to these mutations in veterinary textbooks, but no encyclopedic book of photos. With this Hendershot’s book, farmers could easily learn about the conditions afflicting their animals rather than outright disregarding the oddballs.

Some of the mutations are rarer than others, and Hendershot said local vets can struggle to figure out the cause of a defect if they’ve never seen or heard of it before.

“A lot of vets don’t see these things, they’re not super common,” Hendershot said. “But they do pop up from time to time, and it can be a real challenge to get those answers for their clients.

So, Hendershot said, these photos offer a great launching pad for deeper investigations. And now, with improvements to genetic testing technology, farmers can investigate more easily with genetic testing.

What to do with a double-moo

“It’s critically important for people, when they see something abnormal, to contact someone before they destroy the calf,” said David Steffen, a veterinary pathologist at the University of Nebraska, Lincoln, who studies mutations in cattle. He has worked in the field for twenty years, and has watched the management of livestock mutations change as gene technology has improved. 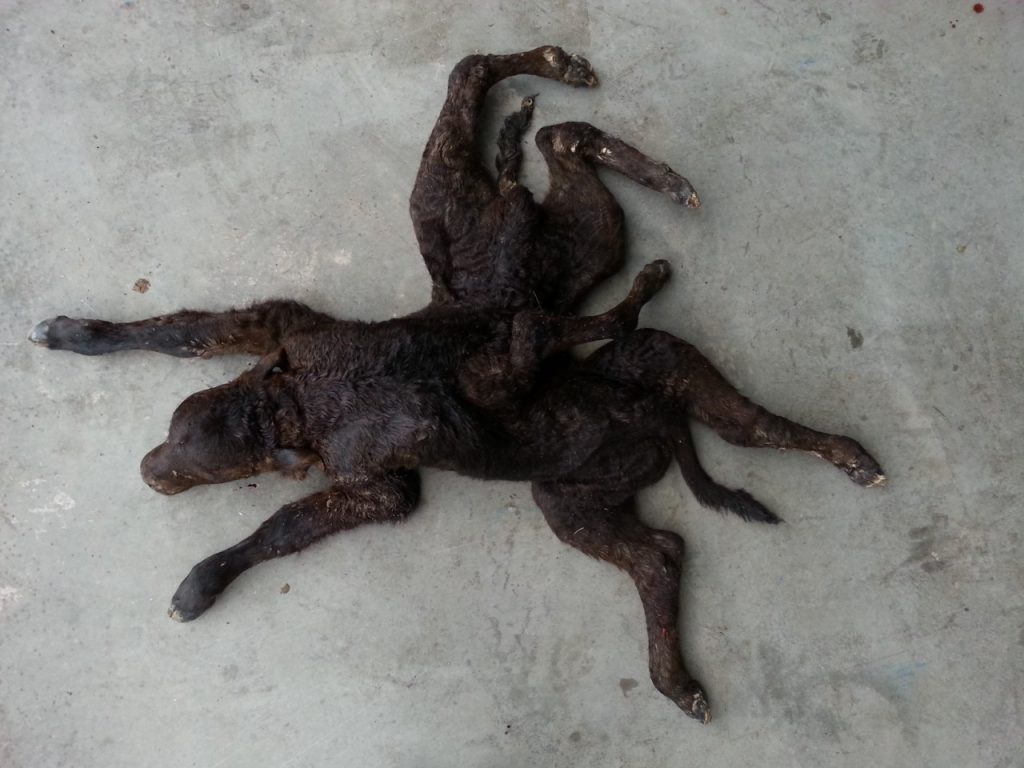 A conjoined-twin calf with two back sides and seven legs. Photo courtesy of Shelby Hendershot

These days, if Steffen’s team spots a mutation behind a newborn’s defect and it is recessive, a rancher has a few options. They might want to pull its mom and dad out the breeding pool or avoid pairing those animals with others with the same recessive mutation. If the deformity is caused by a dominant trait, farmers should genetically test the parents and remove those with the mutation from the breeding pool, Steffen said.

In either case, if a farmer with a mutant calf sends a photo and a DNA sample to a breeding association that monitors the lineage of cattle, so those officials can investigate it. If genetic testing doesn’t identify a mutation, the farmer can look to environmental factors and then decide  whether to cull good stock animals or to just change where they graze. 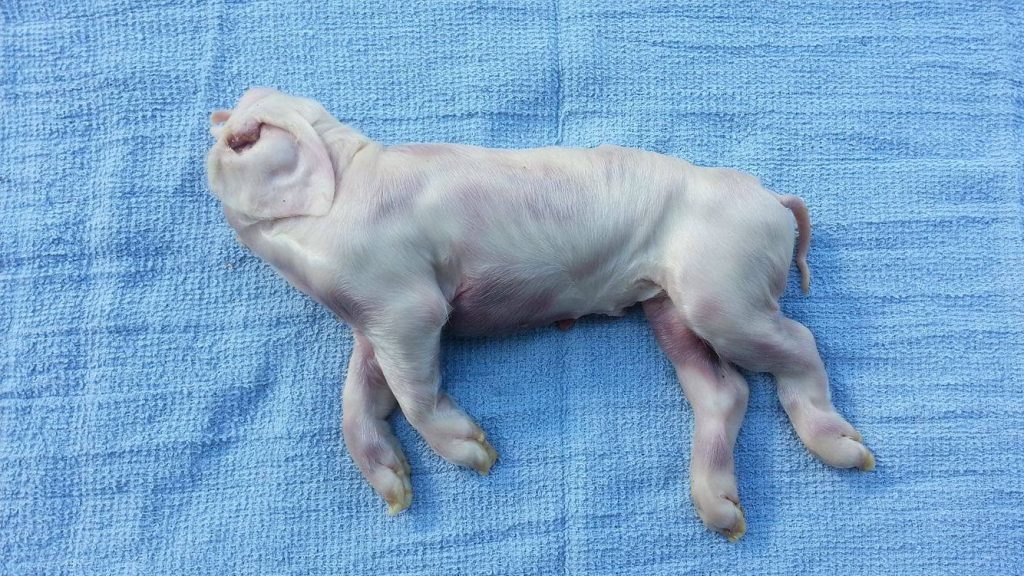 A dead piglet born without a face. Courtesy of Shelby Hendershot

With increasing use of digital photography and social media, pictures of deformed livestock often go viral fairly quickly, but without proper identification, people can blame these mutations on the wrong thing. For example, Hendershot recalls a viral image of a piglet with one head and two bodies.

“People were [blaming] everything from aliens, to GMOs, to pesticides, to toxins and heavy metals,” Hendershot said. But none of those assessments seemed likely. Henderson’s diagnosis: The piglet had been destined to form identical twins, but the split never completed during development.

The hope, Hendershot said, is to bring these mutations out of the shadows, so people can prevent — or just accept — two-bodied piglets and three-legged calves like Trinity.

Left: The cause of the hairlessness in this calf is unknown. Photo courtesy of David Steffen