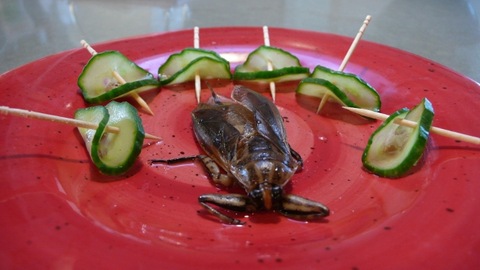 When I told my wife and family that I was going to be eating insects as part of a story I was preparing for the PBS NewsHour, the universal response was “yuck” and “ugh.”

And even after I came back and told them that the bugs were crunchy and pretty good, they still made contorted faces and shook their heads. Adding the fact that 80 percent of the world’s population eats insects as a regular part of their diet didn’t seem to make an impression. And neither did the fact that they contain lots of protein and hardly any fat. Americans’ antipathy to bugs as food is well-entrenched.

Yet a fledgling movement is encouraging us to cultivate, harvest, cook and eat insects, partly as a way to save the world. Edible-insect advocates have set up food carts in San Francisco, conferences in Rome and food fairs in Bozeman, Mont., to promote the idea that insects can help solve food and protein shortages and reduce the huge, expensive efforts to grow beef and pork. Insects, they point out, are much easier to grow than large animals.

And there are plenty of them. Of the 1.1 million species of insects scientists have identified and named, 1,700 are edible. They are cold-blooded creatures, which makes them much more efficient in converting energy to protein — no wasted heat.

Bugs don’t use much water the way cows do. They have a hard exoskeleton and a shell with little holes used for breathing. They can also shut those holes and seal up their bodies so they don’t lose water when it’s hot. Other animals, including us, can’t do that; we sweat to cool our bodies. Insects are more efficient and don’t waste much water.

But the big advantage of eating insects is that they are generally healthier than meat. A six-ounce serving of crickets has 60 percent less saturated fat and twice as much vitamin B-12 than the same amount of ground beef. You don’t have to sell the idea to the people of Madagascar; they eat about 15 different species of insect. And other countries — including Thailand and China — consume vast quantities of bugs.

I do realize that insects do have a bad rap. Most people see insects are pests or as dangerous. But it’s just the opposite. Insects are less dangerous and less of a problem for humans in terms of disease.

The edible-insect movement in the U.S. appears to be gathering converts. At Montana State University in Bozeman, entomologist Florence Dunkel edits The Food Insects Newsletter and makes frequent appearances promoting the idea of eating bugs. University of California, Davis entomologist Lynn Kimsey also promotes edible insects. And others in the U.S. and other developed countries — especially the Netherlands — are pushing hard.

So far, their success is limited. No one knows exactly how many people eat insects or how many insects are consumed in the U.S. Though it may not be a lot, attention seems to be pointed their way. 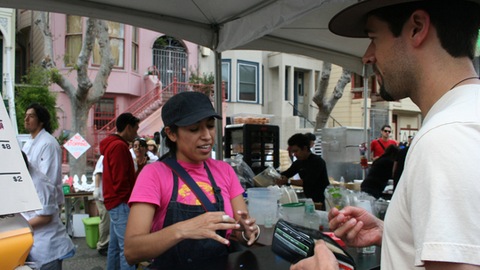 Articles have been appearing in newspapers and on TV, including a long piece by Dana Goodyear in the Aug. 15 New Yorker. She notes the long tradition of eating bugs in America, especially pre-Hispanic America. And Goodyear points out that “European and American entomologists, through programs like (the U.S. Agency for International Development) and British Locust Control, have killed grasshoppers and locusts, which are complete proteins, in order to preserve the incomplete proteins in millet, wheat, barley, sorgum, and maize.”

Despite the science and the health factors, getting Americans to drop their fear and squeamishness of insects and to start eating them will take some doing. But that could happen as other sources of protein become more expensive and harder to grow. For now it’s a fad that — if you partake — will amaze your friends and family. But eventually we may be having bugs for dinner.

On Monday’s NewsHour broadcast, watch Spencer Michels taste wax moth larvae tacos in his in-depth examination of the growing movement to get more Americans to add insects to their diets. Learn more about the edible-insect movement from KQED’s QUEST.