If a Boy Scout Can Get Nuclear Materials, What’s Stopping Terrorists?

Back in the days when we thought a “dirty bomb” might be a raunchy joke gone awry, young David Hahn was gathering all the radioactive material he could get his hands on. But he came in peace.

Hahn is the man who earned the sobriquet “The Radioactive Boy Scout” in 1995 when he came very close to building a breeder nuclear reactor in his backyard in suburban Detroit. I am serious as a meltdown.

I heard about his tale while I spent some time with some of New York’s finest – the anti-terrorism unit. In the course of a whirlwind day that involved time in a chopper, a boat, an SUV and the 4 train, I picked up on the legend of the really rad Boy Scout from my home state.

I kept asking if anyone could or would have the time, energy, money and knowledge to gather up some readily available radiological materials, duct tape it to some dynamite, and make himself or herself the kind of dirty bomb that the post-9/11 world has come to fear and loathe.

And finally one of the anti-terror cops mentioned David Hahn’s story. A little bit of digging and we found David more than willing to tell his tale. We were booked to DTW faster than the half-life of Seaborgium (look it up!).

David is now in his mid-30s and going to college to become a practitioner of the science of public relations. Before he landed back in Michigan, he had two stints in the service: one tour as a Marine and one as a Navy enlisted man. In that latter role, he became the helmsman of the USS Enterprise — a nuclear-powered aircraft carrier — which he says is a bear to parallel park.

That job presented a ironic turn for the kid who grew up devouring a 1960s vintage Golden Book of Chemistry Experiments – which offered all kinds of interesting, sometimes dangerous, ways for kids to get a taste of the what it is like to be a scientist.

David loved the story of Pierre and Marie Curie’s discovery of Radium. In fact, he could not stop thinking about the glowing material depicted in the drawing on that page in the book. He figured it was the best way to solve the energy crisis. With his father’s encouragement, he decided to become an Eagle Scout (did you know 11 of the 12 Apollo moonwalkers were scouts? First man on the moon Neil Armstrong and moonwalker Charles Duke were the two Eagle Scouts of the group).*

Naturally, the atomic energy merit badge interested him the most. The book required the Eagle wannabe to make a model of a nuclear reactor out of straws and matches and stuff. David decided he would rather make the real thing — and then set about to gather up as much hot stuff as he could lay his hands on. 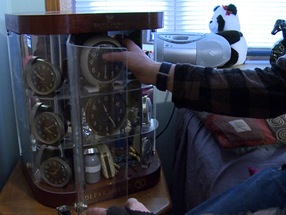 He got Thorium from lantern mantles, Americium from smoke detectors and Radium from old clock dials. He had pretty much all he needed to make a small breeder reactor, which can generate more fissile material than it consumes. It sounds like a cool trick but as you can imagine these things have a way of going south … to China.

David spent sometimes eight or 10 hours a day in his backyard shed trying to fashion himself a breeder reactor. All he wanted to do was transform one element to the next. He thinks he may have done that but cannot be sure.

Before things got even weirder in his backyard, David got cold feet, gathered up his stuff, put it in the trunk of a car and proceeded to get pulled over by the fuzz. Game over. A moon-suited team was there in a jiffy — and his shed, the hot stuff and much of the dirt in his backyard made its way to a radioactive waste dump in Utah.

David’s reactor-building days were done. But since he never broke the law — or meant any harm, he never did any time in the can. A bomb? He said he never thought for a moment about building a bomb!

But here is the bottom line — and why he was a nice addition to our story: He says it was awfully darn hard to gather up all the smoke detectors, Coleman lantern mantles and old clocks.

Matter of fact, they say you would need about 2 million smoke detectors to make a single dirty bomb of any consequence.

What we should be worried about is the radioactive material that sits in machines inside hospitals. There is enough Cesium in one blood irradiator to make many dozens of dirty bombs. So let’s hope they are battening the hatches inside hospitals these days.

We don’t want anyone getting a dirty bomb merit badge.

For more, view Miles O’Brien’s report on the threat of ‘dirty bombs’ in the U.S.

*An earlier version of this post incorrectly identified the number of Apollo moonwalkers who were also Eagle Scouts.