Planning to cheer or jeer at inauguration? Here’s how to care for your voice

This Friday, an estimated 800,000 people will descend on Washington, D.C., for President-elect Donald Trump’s inauguration ceremony. A day later, protesters plan to join the fray at the Women’s March. One bridge will unite the supporters and naysayers alike: full-throated yelling.

When the dust settles, many may complain of hoarse voices, but why? Your vocal cords are mostly muscle. But unlike like your thighs or biceps after an overzealous gym session, your vocal cords don’t hurt when you strain them.

The explanation exposes how little is generally known about our resilient noisemakers and how those body parts age.

“The larynx is a fascinating organ, and a black box to most — even most doctors,” University of Southern California laryngologist Michael Johns said. “The voice is obviously our primary mode of communication as people, and it’s one of those things that you kind of take for granted.”

There’s this myth among singers that if you drink hot lemon tea, that’s going to help because the vocal folds gets bathed in the tea. That’s completely false.

Situated in the upper throat, the larynx, or voice box, is a passageway that guides air between the mouth and lungs. But the larynx also houses a slitted piece of flabby muscle, known as the vocal cords or vocal folds, which is responsible for your voice. The two sides of your vocal cords bash rapidly together — 100 and 200 times per second in men and women, respectively — to create sounds required for human speech and singing.

“You figure over the course of a day of voice use, that’s millions and millions of collisions,” Johns said. The vocal cords are primarily muscle tissue, which power this repetitive exercise. This muscle is covered with sturdy, connective tissue and then a outer “skin” layer that makes mucus. 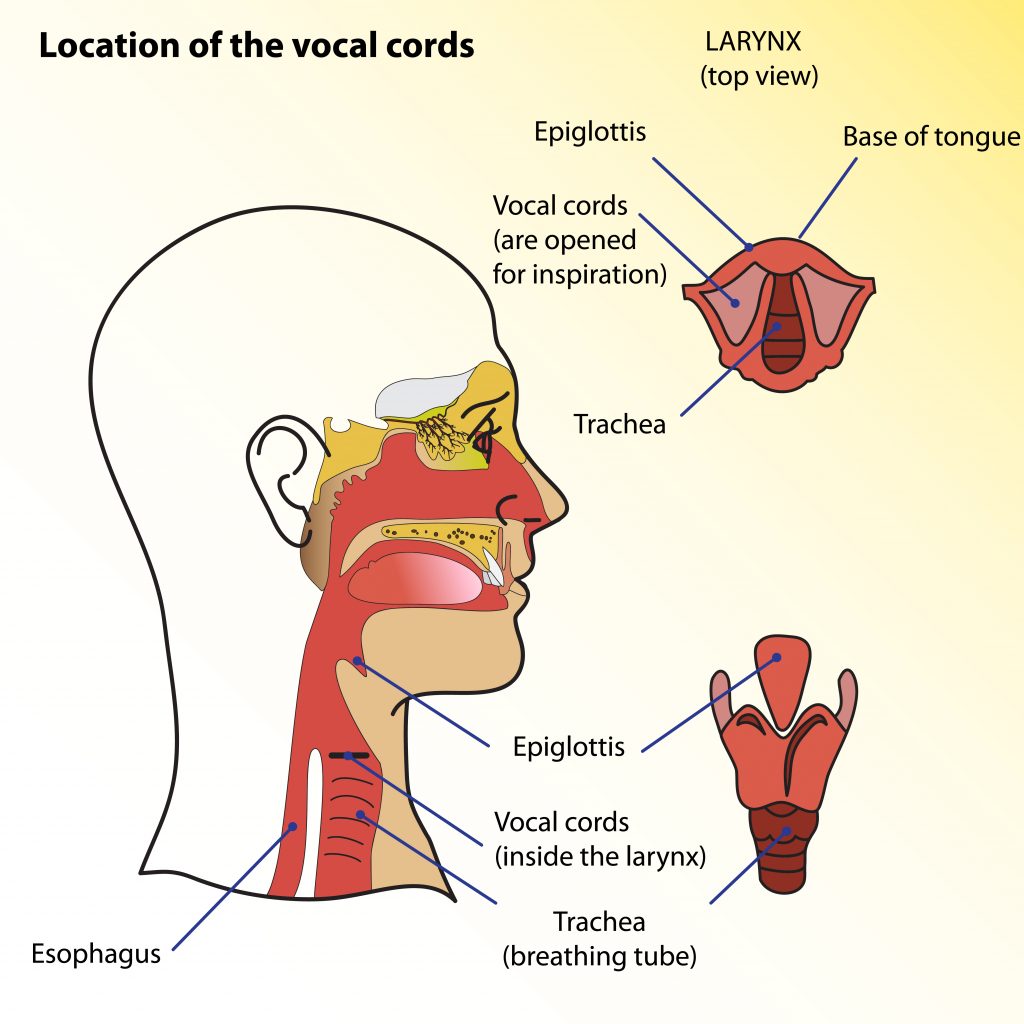 This snot is crucial for your voice. It lubricates the vocal folds and keeps them from stiffening or damage due to those rapid impacts. This moistness, in turn, influences the pace of the vocal cords’ vibrations — or mucosal wave.

“The vocal folds have a very specific viscosity, and you need that viscosity to create the mucosal wave,” said Susan Thibeault, an otolaryngologist and surgeon at the University of Wisconsin.

Mucus, or rather the lack of it, explains why talking becomes difficult in dry or cold weather.

Intense voice usage, such as singing for hours and screaming at a concert, can also dry out and damage the mucous membrane. This skin layer cracks, or pieces of it slough off faster than they can be replaced. You might expect for these events to hurt, but they don’t.

“One thing that’s missing in the voice is a natural feedback for warning signs,” Johns said. “So when you get hoarse or maybe [when] you’ve had laryngitis, it doesn’t hurt.”

That’s because, unlike other muscles, your vocal folds don’t contain pain nerves. From an evolutionary perspective, this dearth makes sense, Johns said. The mammalian larynx and vocal folds originally evolved to protect the airway from choking (or aspirating) on things like water or food. It’s only later that the human brain evolved the coordination with our tongue, palate and lips to create speech. If there were a lot of pain receptors in the larynx, then you’d be more prone to think something is wrong and aspirate.

Lasers are better than acid

Thibeault said if a person continues to misuse or overuse their voice, then the stress can also aggravate the inner connective tissue, called the lamina propria. The lamina propria is where people develop little masses called cysts, polyps or nodules. Cysts and polyps resemble swollen bumps on the vocal cords, while nodules are like calluses. For most folks, these lesions are benign, but for singers, the injuries can be career threatening.

Such was the case for British singer and songwriter Adele. In 2011, a polyp — a kind of swollen blister — burst inside the British singer’s vocal cords and caused a hemorrhage. She suspended her tour and sought out Steven Zeitels, a laryngeal surgeon at Massachusetts General Hospital in Boston, who is known for treating the vocal injuries of superstars. Julie Andrews, Sam Smith, Steven Tyler and Keith Urban have passed through Zeitels’ clinic because of a breakthrough he made around the turn of the century. 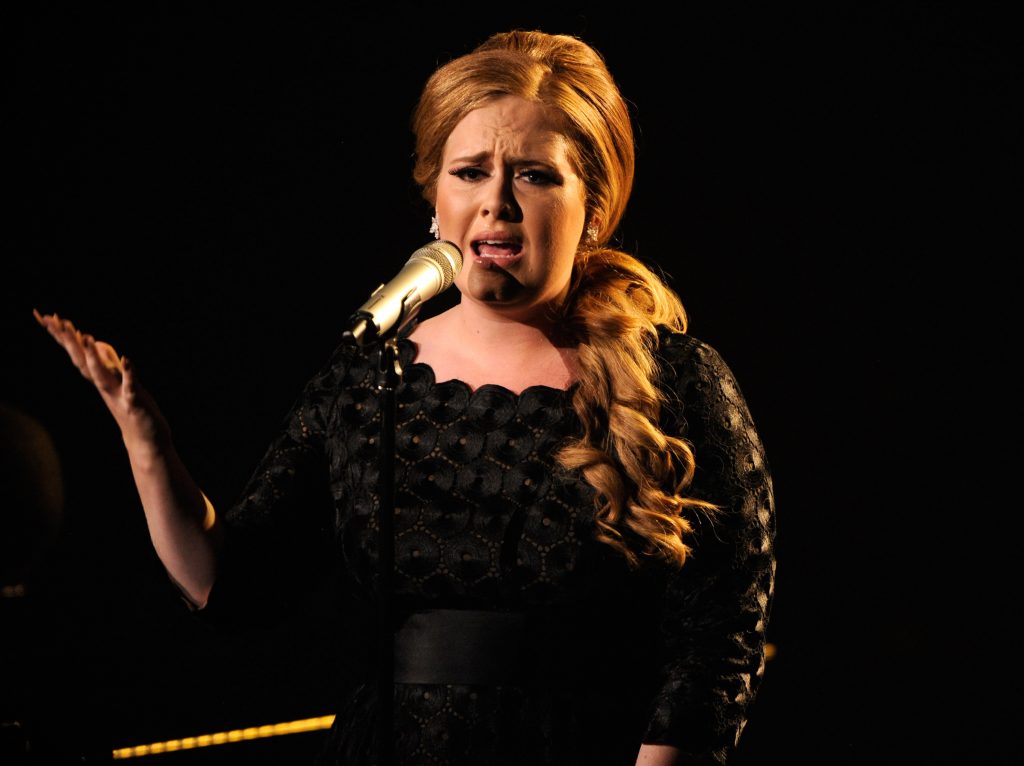 “Through much of the 20th century, people were brought to the operating room for little lesions, masses and polyps, and things were removed with little hand instruments,” Zeitels said. “What’s happened in the last four decades, and even more so in the last decade, is highly sophisticated laser technology.”

He said a century ago doctors had their patients swallow nitric acid to burn away cysts, polyps or nodules. Needless to say, that wasn’t great because it often burned the vocal cord tissue too.

Surgery replaced this acid wash, but a windpipe is a small workspace. If a doctor struggled to patch an incision, then it may bleed and scar. Large scars reduce the vocal cord’s flexibility and change a person’s pitch, which would be detrimental for singers.

So Zeitels and other laryngeal surgeons spent decades finding a new way. His team now uses microsurgery to slice away the little masses, but the real kicker comes with their lasers. The heat from those light beams seal the wound before its busted blood vessels can leak everywhere and cause a scar. Zeitels’ laser technique prevents those scars from forming.

“It was a perfect technique to solve the bleeding problems that both Sam Smith and Adele were having,” Zeitels said.

Call your grandma. It’s time you had a talk.

Vocal cord injuries are not an infliction of the young or old, Zeitels said, but rather they happen among those who are fundamentally committed to using their voice. This habit is prevalent in modern society. Most jobs at the beginning of the 20th century involved manual labor and little voice usage, he said. But these days, the trend has flipped, and most gigs involve regular talking. Voice recognition technology — think Amazon’s Alexa — is rapidly improving, which may further shift the balance toward vocal communication.

So what can people do to protect their voices? Well, you can skip the hot tea.

“There’s this myth among singers that if you drink hot lemon tea, that’s going to help because the vocal folds gets bathed in the tea,” Thibeault said “That’s completely false, because the tea doesn’t even come close to touching your vocal folds.”

The larnyx is protected from liquids by the epiglottis, a flap of cartilage the end of the tongue that covers the voicebox every time you swallow. “You don’t want things to touch your vocal folds, because that causes you to cough — that’s the sense of food going down the wrong pipe,” Thibeault said.

The warmth likely creates a placebo effect, whereby the drinker assumes something is happening, she said, even though the temperature changes in the throat are minimal. At best, the tea can hydrated a chapped mouth or boost your body’s water levels overall. The latter might aid hydration of your vocal cords, but the change isn’t immediate, Thibeault said.

No, the only remedy for a hoarse voice is taking a break. Because the vocal folds lack pain receptors, the only way to sense their weariness is when your voice feels hoarse. Avoiding strain — excessive screaming — in the first place is key, Johns said. But once the vocal cords are hoarse, then the sole mode of recovery is rest or frequent breaks. This rule applies to the average Jane yelling on a sidewalk and the rock superstar. 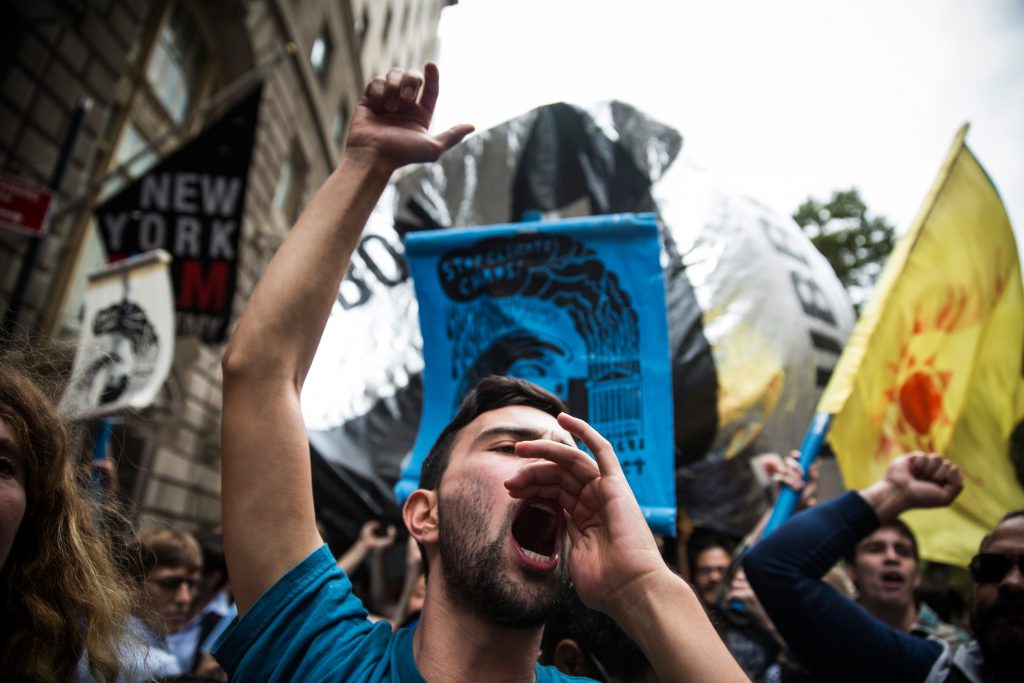 Protesters calling for massive economic and political changes to curb the effects of global warming hold a sit in around the Wall Street Bull statue on Broadway in 2014 in New York City. Photo by Andrew Burton/Getty Images

“If I went out and ran a marathon I’d injure myself, right?,” Johns said. “But if I trained, and I gave myself periods of rest during my training, then I would be able to grow my vocal stamina.”

This stamina helps, but even professional singers can push too far. Adele, for instance, said if she ever tried a 200-date tour again, then her injury would return. Yet with the proper rest and training, singers can maintain their regular voice for decades. Opera singer Luciano Pavarotti performed well into his 70s.

But if you can’t work on your voice for hours everyday, then it’ll likely change as you age. Yes, your voice keeps evolving even after puberty. Male voices get higher pitched, as their vocal folds lose muscle mass and stiffen with old age. Meanwhile, female voices get lower from their 20s through their 70s, thanks to hormones.

The same thing happens when women have their periods. Testosterone levels increase, and a woman’s pitch tends to drop.

“Many women report change in the voice through menopause,” Johns said, which is most likely due to testosterone. Throughout most of a woman’s adult life, her ovaries secrete estrogen and progesterone, which dictate her sexual features and menstrual cycle. But a woman’s ovaries produce small levels of testosterone too.

“Once women reach about 80, the effects of volume and muscle loss in the vocal folds kind of takes over and pitch rises,” Johns said.

Singing and vocal activities can battle age-related voice problems, but regular conversation can help too.

“As we get older, people can be more isolated, and maybe using their voice less because they may not be working as much,” Johns said. “It’s a use it or lose it type situation.”

Or, to put it simply, he said: Call your grandparents.