Paleontologists have discovered an ancient human relative in South Africa thanks to a tricky cave diving excavation that recovered close to 1,550 fossils buried 100 feet underground.

The fossils were found by recreational spelunkers two years ago who were climbing 30 miles northwest of Johannesburg.

“In the first half of the 20th century, this region of South Africa produced so many fossils of our early ancestors that it later became known as the Cradle of Humankind,” Jamie Shreeve wrote for National Geographic who broke the story todaywith our PBS sister program NOVA.

The pair were exploring Rising Star, a popular cave in the region, when they made the fossil discovery. After squeezing through two narrow crevices, the cave divers — Steven Tucker and Rick Hunter — stumbled upon a massive collection of well-preserved bones.

They notified Lee Berger, a paleoanthropologist at South Africa’s University of the Witwatersrand, who has spent two decades hunting for fossils in the region. Berger assembled a team ultrathin climbers to excavate the bones. 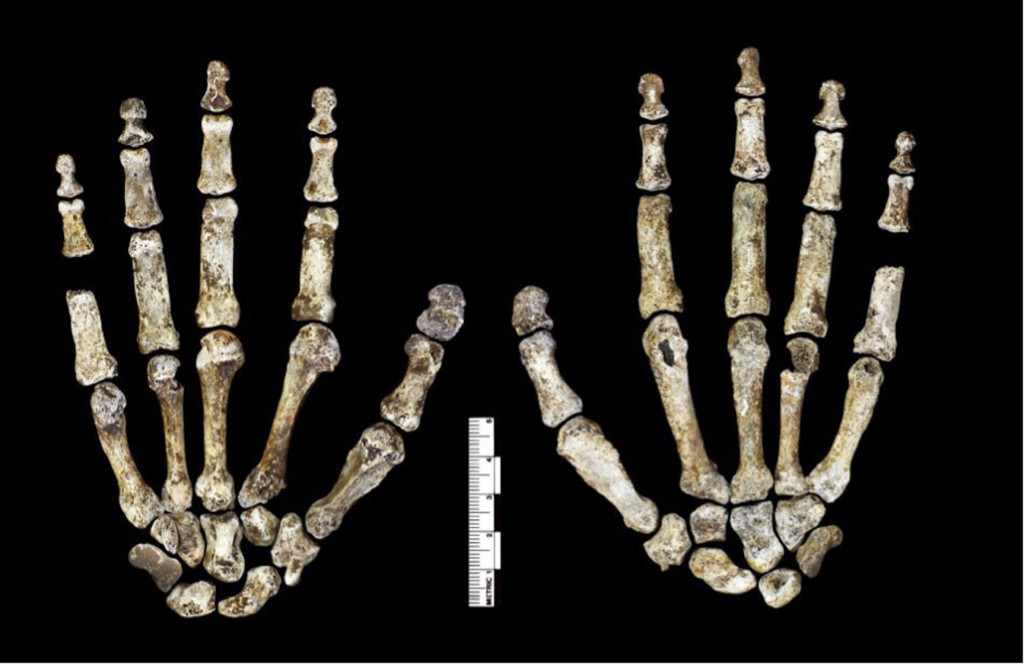 The hands of Homo naledii. The proportions of digits are humanlike.

In a Facebook ad that Berger posted in October 2013, he wrote: “We need perhaps three or four individuals with excellent archaeological/palaeontological and excavation skills for a short term project that may kick off as early as November 1st 2013 and last the month if all logistics go as planned. The catch is this – the person must be skinny and preferably small.” National Geographic tracked the progress of the dig from its inception.

Following a two-year excavation, Berger’s team has named the new species Homo naledi, meaning “Star Man”, which pays homage to the site where the bones were found. Based on the pristine skeletons, Homo naledi was just under five-feet tall and had a very small relative to humans. The team’s findings were released today in the journal eLife.

As such, it’s unclear how this new species fits into the evolution of humans and humanlike species. It “appears most closely related to Homo erectus (“Upright Man”), a human predecessor species that lived in Africa and Asia within the last 2 million years,” Dan Vergano wrote for BuzzFeed.

However, the age of this new species remains a mystery to the public, as the team hasn’t reported radiocarbon dating for the fossils. Such info could help explain whether Homo naledi is a human ancestor, a species that split from humans and lost its size or one of the many humanlike primates that coexisted during the same time as early man and woman.

Given the number of bones in this stone chamber, Berger’s team suggests that Homo naledi may have intentionally climbed into this cave to deposit the remains, in a pseudo mass grave. That would be a rare behavior for a primate species with such a small brain.