In 2006, NASA’s Cassini spacecraft captured this backlit view of of Saturn’s rings during an eclipse of the sun. Courtesy Cassini Imaging Team/ Image by NASA/JPL-Caltech/SSI.

Editor’s note: Carolyn Porco is the leader of the imaging team for the Cassini mission at Saturn and a veteran imaging scientist on the 1980s Voyager mission. She participated in the famous 1990 Pale Blue Dot image of Earth taken from beyond the orbit of Neptune by NASA’s Voyager 1 spacecraft.

More than 50 years of traveling invisible interplanetary highways around our solar system and nearly a decade of orbiting Saturn have brought us to a keen awareness of the celestial bodies in motion around the sun and the series of events responsible for their birth and development. We could hardly claim to know the complexity of the planetary systems that lie beyond the asteroid belt, the chronology of the early solar system, or the wide range of extraterrestrial environments where biological processes might be at work, were it not for the many exploratory expeditions that we have mounted to these far-flung worlds.

But perhaps the greatest, most profound legacy of the quest we have undertaken to understand our origins is perspective: that crystalline, uncorrupted view of our cosmic place that erodes all delusion and confronts us with a powerful recognition of ourselves, a recognition that never fails to move us.

It is surely for this reason that of all the millions of images taken of the worlds in our solar system since the beginning of the space age, those that reach deeper into the human heart than any other are those of our own home, as it might be seen in the skies of other worlds: small, alone in the blackness of never-ending space and awash in the blue of its oceans. 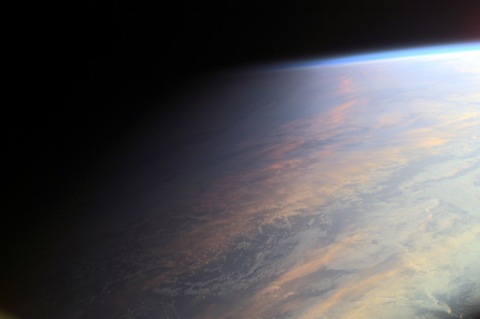 This picture of Earth from space was taken in June 2001 from the International Space Station orbiting at an altitude of 211 nautical miles. Photo by NASA.

Cassini’s first offering to this collection, taken in September 2006 when the spacecraft was placed, for scientific purposes, at significant remove in the shadow of Saturn, has become one of our most beloved images. This is an image that draws gasps from anyone seeing it for the first time. Small wonder: In it, we behold something human eyes had never before seen — a backlit view of the full, resplendent glory of Saturn’s rings during an eclipse of the sun, the smoky blue ring created by the exhalations of the small moon, Enceladus, and, best of all, a sight of our planet, Earth, a billion miles in the distance. This is an image without peer, an image that can make one weep with joy, love, concern, an abiding sense of fellowship, and unspeakable awe.

As I have contemplated the inevitable and approaching end of our history-making travels through the Saturn system, I have longed to repeat that remarkable image, make it even better, and turn it into something special. I imagined making it an opportunity for all of us to appreciate how far we have come in the exploration of our cosmic neighborhood and to celebrate the uniqueness of our lush, life-sustaining world and the preciousness of the life on it. I wanted to repeat that image, only this time, tell all the world about it in advance. This could be a day, I thought, when all the inhabitants of Earth, in unison, could issue a full-throated, cosmic shout-out and smile a big one for the cameras from far, far away.

And so it will be. 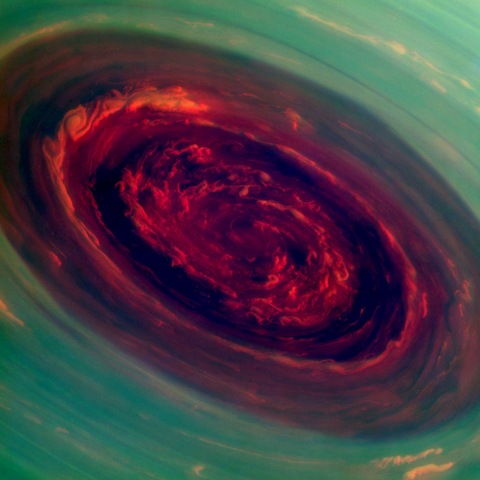 The spinning vortex of Saturn’s north polar storm resembles a deep red rose of giant proportions surrounded by green foliage in this false-color image from NASA’s Cassini spacecraft. Measurements have sized the eye at 1,250 miles across with cloud speeds as fast as 330 miles per hour. Image by NASA/JPL-Caltech/Space Science Institute.

On July 19, 2013, the Cassini cameras will be turned to image Saturn and its entire ring system during the planet’s eclipse of the sun. In the lower right, among the outer diffuse rings that encircle Saturn, will be a small speck of blue light with all of us on it. A mosaic of images covering the rings from one end to the other, some taken in those filters that are used to make a natural color scene — that looks like what human eyes would see — will be taken at this time. Also to be recorded: an image of the highest resolution that we are capable of taking, in which we will find Earth and its moon. One will be a colorless, star-like point of light. The other, of course, will be a pale blue dot.

So, at the appointed time, to be announced here, straighten up, brush your hair, go outside, gather with friends and family, think a thought or two about the starkness of our whereabouts, the beauty of our home planet, the marvel of our existence, and the magnificence of our accomplishments. And then, look up and smile.