China is making significant headway in preventing toxic algal blooms, by decreasing a pollutant — phosphorus — in its lakes.

Phosphorus, a mineral and an ingredient in farm fertilizer runoff that can prompt algae to multiply, dropped 60 percent in Chinese lakes from 2006 to 2014, according to a new study that analyzed 862 lakes across the country. By showing where Chinese water pollution policies succeeded and where they fell short, this study offers a blueprint for other industrializing and developing nations, where algal blooms threaten drinking water, kill aquatic life and pose dangers to children, pets and livestock.

The researchers point to the Chinese government’s efforts to reduce water pollution as the main catalyst for the decline.

“We wanted to check the long term trend of phosphorus concentrations of Chinese water bodies in terms of the five-year plans in China,” said Yan Lin, a scientist at the Norwegian Institute for Water Research and an author of the study published in Nature Geoscience.

In the most populated areas, in eastern and middle China, the most successful measures have been improved sanitation in the urban and rural residential areas.

Every five years, China reviews and revises its national plan to control water pollution. According to Lin’s study, 34 laws or regulations targeting domestic and industrial wastewater discharges have been issued from the China State Council and the Ministry of Environmental Protection since 2006. The Chinese Central Government has also invested upwards of $116 billion on these controls.

Each area saw unique changes based on implemented government policies.

“In the most populated areas, in eastern and middle China, the most successful measures have been improved sanitation in the urban and rural residential areas,” Lin said. Household waste is a major contributor of phosphorus to the environment. Washing machine detergents, dishwasher soap and personal care products contain phosphorous that readily seeps into water supplies. 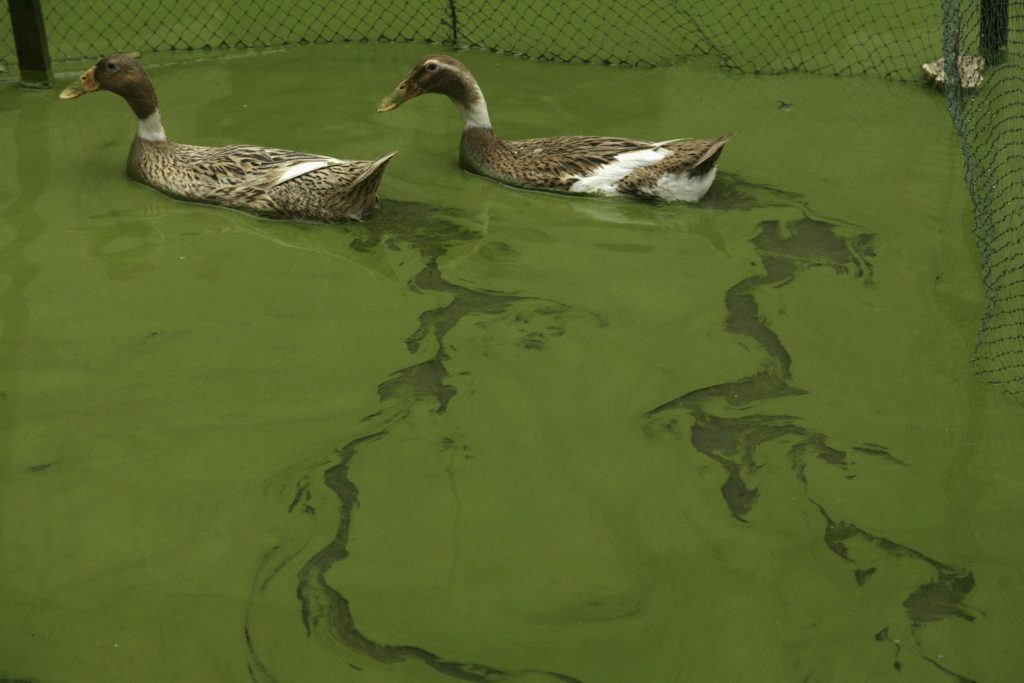 Ducks swim in the algae-filled Taihu Lake in Huzhou, Zhejiang province on April 16, 2008. Since then, this lake in eastern China has witnessed a significant drop in phosphorous pollution, which spawns algae blooms. Photo by REUTERS/Stringer

While improved sanitation reduced phosphorous in western China too, the study argued further gains could have been achieved with policies aimed at agriculture and aquaculture. Most phosphorus in that area comes from big crop and livestock farms as well as the phosphate chemical industry, such as companies that mine phosphate deposits for sale on the global fertilizer market.

Any policies that keep phosphorus in the soil and soil on the ground will decrease phosphorus runoff into aquatic systems, said Jessica Corman, an ecologist at the University of Wisconsin-Madison who was not involved in the study. Human activities like deforestation, overgrazing and overcropping can loosen soil and make it prone to erosion by wind and rain. Erosion can then carry phosphorus in the soil into nearby water bodies.

Farmers should only use fertilizer when they need it, and be efficient in their use to avoid waste.

Farmers should only use fertilizer when they need it, and be efficient in their use to avoid waste, Corman said.

But it’s difficult to make sure all farmers are following specific policies, Lin said.

“There are guidelines for farmers on how to do fertilization. However, it is hard to control every single farmer as strictly as point sources like wastewater treatment plants. It is impossible to check every single farmer’s practices,” said Lin. “We suggest that different regions in China should have more flexibilities to develop their own strategies.”

Meanwhile, northeastern China is bucking the national trend. Phosphorous levels increased in the region over the study period, but researchers are unsure why. Many lakes in northeastern China have low nutrient levels, so the increase in phosphorus could be part of a natural shift.

Another explanation, Lin argued, could be extra rainfall due to climate change. When combined with the area’s heavy deforestation, precipitation can cause soil erosion and wash naturally occurring phosphorus in the dirt into into lakes and streams. Substantial amounts of phosphorus may have also entered the atmosphere in northeastern China due to atmospheric deposition — where weather patterns launch loose soil particles including phosphorous into the sky, which then return to the ground via rain, snow and fog.

A guidebook for other nations?

China is not the only country attempting to control the levels of phosphorus in its waters.

Lake Erie suffered from a massive algal bloom in 2014, due high phosphorous levels, which caused a water crisis in Toledo, Ohio. Phosphorous continues to plague the region’s water supply, and the National Oceanic and Atmospheric Administration predicts that phosphorus levels will exceed normal levels in 2017. Lakes often retain phosphorous for years and algal blooms, which NOAA tracks, are becoming more frequent in coastal areas worldwide, including the Gulf of Mexico, along West Coast and in the Mediterranean. The event typically happens in the hotter summer months. 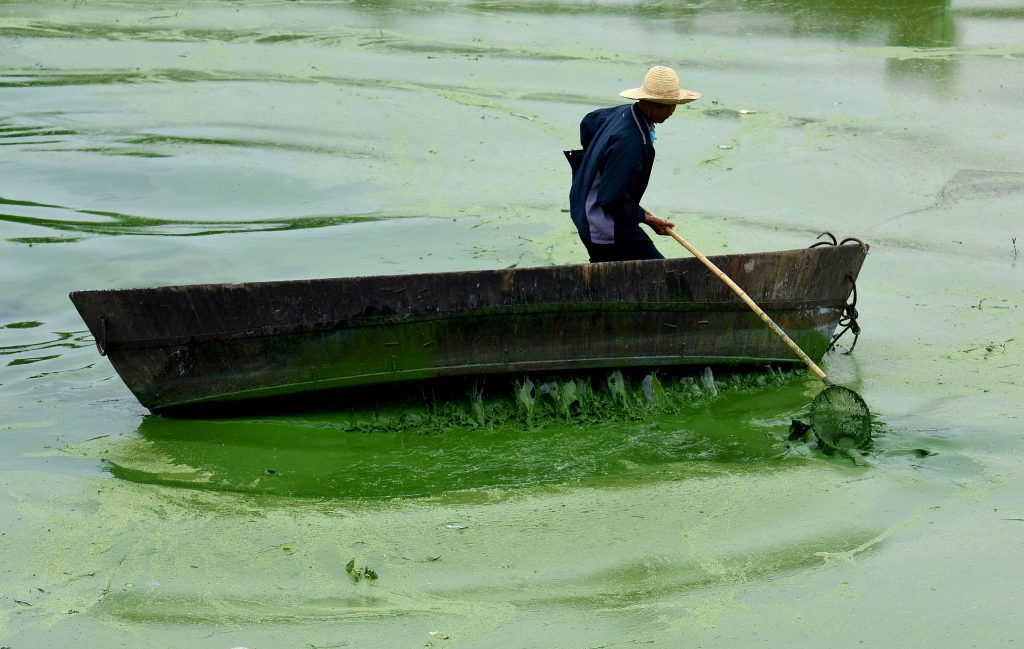 China still has a long way to go toward hindering algal blooms, as evidenced by this worker trying to clear blue-green algae from Chaohu Lake, Hefei, Anhui province, China on July 4, 2015. Photo by REUTERS/Stringer CHINA OUT.

Corman said governments need to rethink their consumption of phosphorous because of the depletion of the resource in the world’s biggest mines, such as those in China, Morocco and Western Sahara and Florida. Less phosphorous means less fertilizer and food shortages.

In 2008, fertilizer prices skyrocketed, as phosphate prices increased 93 percent in a single year. The fertilizer price spike played a major role in a global food crisis that year, leading to food riots in Africa, Asia, Latin America, the Middle East and the Caribbean.

“So thinking about phosphorus as a resource and not just as a pollutant – that shift of thinking might help create more holistic policies that have multiple benefits for food security and water quality,” Corman said.

The next step for China’s next step is keeping its phosphorous levels low, while also monitoring levels of nitrogen–another chemical that can also disrupt ecosystems and cause algal blooms.

“I’m eager to see what happens in these lakes over the next 10 to 15 years,” Corman said.

Left: A fisherman fills his cupped palms with water from the algae-filled Chaohu Lake in Hefei, Anhui province, June 16, 2009. The country has invested $116 billion towards projects and regulations aimed at curbing water pollution since 2006. Photo by REUTERS/Stringer