Scientists moved the hands on the Doomsday Clock two minutes closer to midnight on Thursday. The clock now stands at three minutes to apocalypse.

The Bulletin of the Atomic Scientists (BAS) created the clock in 1947, following the atomic bombings of Hiroshima and Nagasaki by the U.S., as a way of bringing awareness to nuclear proliferation. Midnight signifies what the BAS sees as a global catastrophe.

The move yesterday was a response to the impending dangers of climate change and nuclear weapons.

“In 2015, unchecked climate change, global nuclear weapons modernizations and outsized nuclear weapons arsenals pose extraordinary and undeniable threats to the continued existence of humanity,” a statement released by the BAS on Monday said. 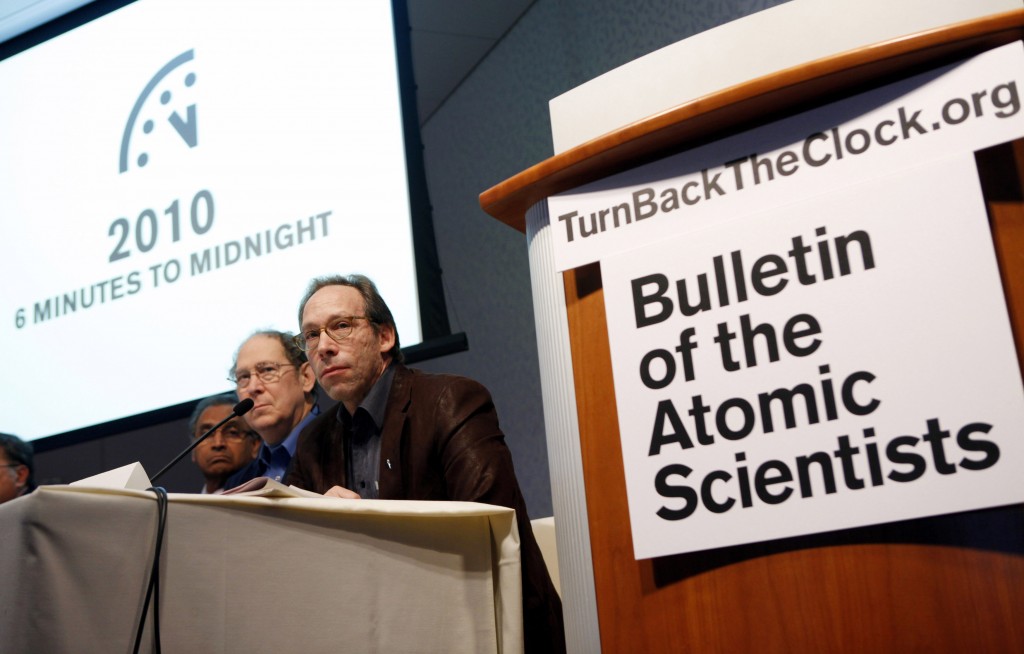 Chairs of the Bulletin of Atomic Scientists held a news conference in 2010 when they moved the minute hand of the Doomsday Clock one minute away from midnight, making it six minutes from midnight. Photo by Reuters/Shannon Stapleton.

The last move the clock made was in 2012, from six to five minutes to midnight, again for climate change and nuclear proliferation. This is the closest to midnight the clock has been since the Cold War.

“The probability of global catastrophe is very high. This is about the end of civilization as we know it,” said Kennette Benedict, executive director of the BAS, at a news conference in Washington, DC.

BAS’s statement ends with a warning that policymakers must move quickly to avoid disaster: “The probability of global catastrophe is very high, and the actions needed to reduce the risks of disaster must be taken very soon.”

Left: Chairman of the Bulletin of the Atomic Scientists Leonard Reiser is shown here in 1998 adjusting the clock 14 minutes before midnight. Photo courtesy of Reuters.