How close is the Ebola vaccine?

The quest for an Ebola vaccine has been a journey filled with excruciating delays and mad dashes. The latest outbreak in West Africa caused governments and drug companies to jumpstart research that had languished back when the threat of Ebola wasn’t big enough to sustain a commercial market. (Prior to 2013, the virus had sickened fewer than 2,300 people in known history). Human safety trials of two vaccines began last summer — each being given to a small group of healthy volunteers. When no major side effects were apparent, health officials scrambled to launch larger tests in the countries that were most affected by Ebola.

By the medical world’s standards, these trials are happening at blinding speed, but the success of the containment effort in the winter and spring has made it virtually impossible to prove whether or not the vaccine works. If no one is getting sick, how can you test if the vaccine protects them?

Even so, health officials say the trials will provide some crucial answers. Here’s a breakdown:

What Vaccines Are Being Tested?

Two vaccines are being given to human volunteers in large-scale clinical trials. Both are recombinant vector vaccines, meaning they use a harmless, inactivated virus as a vehicle to deliver a single protein from the outer coating of the Ebola virus. In effect, the vaccines “teach” the immune system to recognize this protein and respond to the real Ebola virus in the future.

One vaccine was developed by the U.S. Institute for Allergy and Infectious Disease. It is produced by the GlaxoSmithKline pharmaceutical company and uses an inactive adenovirus to deliver the Ebola surface protein. The adenovirus typically circulates in chimpanzees, causing mild illness like the common cold. The vaccine goes by the name of cAD3-EBOZ. C is for chimp.

The second vaccine has the equally catchy name of VSV-ZEBOV. It was developed by the Public Health Agency of Canada. It is now licensed by Merck and NewLink Genetics, a biotech company based in Ames, Iowa. In this case, the Ebola protein is hitched to a live vesicular stomatitis virus, which normally circulates in cattle.

Where Are the Trials?

Launched in February, the Partnership for Research on Ebola Vaccines in Liberia (PREVAIL) trial is testing both candidate vaccines. Fifteen-hundred volunteers in Monrovia have received either one of the two vaccines, or an inactive saline solution as a placebo. Participants return at regular intervals for testing to see if their bodies are producing antibodies to Ebola — a telltale sign of immunity. Once officials finish analyzing the results, they plan to expand the trial to include tens of thousands of people. The trial is being run jointly by the U.S. National Institute of Allergy and Infectious Disease and the Liberian Ministry of Health (NIAID), although NIAID officials say they are negotiating to expand the trial into Guinea, which is seeing more Ebola cases.

The Sierra Leone Trial to Introduce a Vaccine against Ebola (STRIVE) trial began in April and is giving the VSV-ZEBOV vaccine to volunteers in Sierra Leone. All participants are health workers, including sanitation and burial workers, all of whom are at particularly high risk of infection. Unlike the PREVAIL trial, no one receives a placebo. Instead, some participants receive the vaccine immediately, while others are monitored but don’t get a shot until six months later. The rate of infection in the first group will be compared with those who wait. This trial is run by the U.S. Centers for Disease Control and Prevention (CDC), Sierra Leone’s Ministry of Health and the College of Medicine and Allied Health Sciences in Freetown. As of this week, they’re about halfway to the goal of vaccinating 6,000 people.

A third trial began in Guinea, in March, using what’s called a “ring” strategy. Health workers give the VSV-ZEBOV vaccine to the contacts of people who fall sick with Ebola, and to close contacts of those contacts. So far more than 2,600 people have been vaccinated — some immediately and a comparison group three weeks later. A ring strategy was used to eradicate smallpox, but it has never been used in a clinical trial for a vaccine. 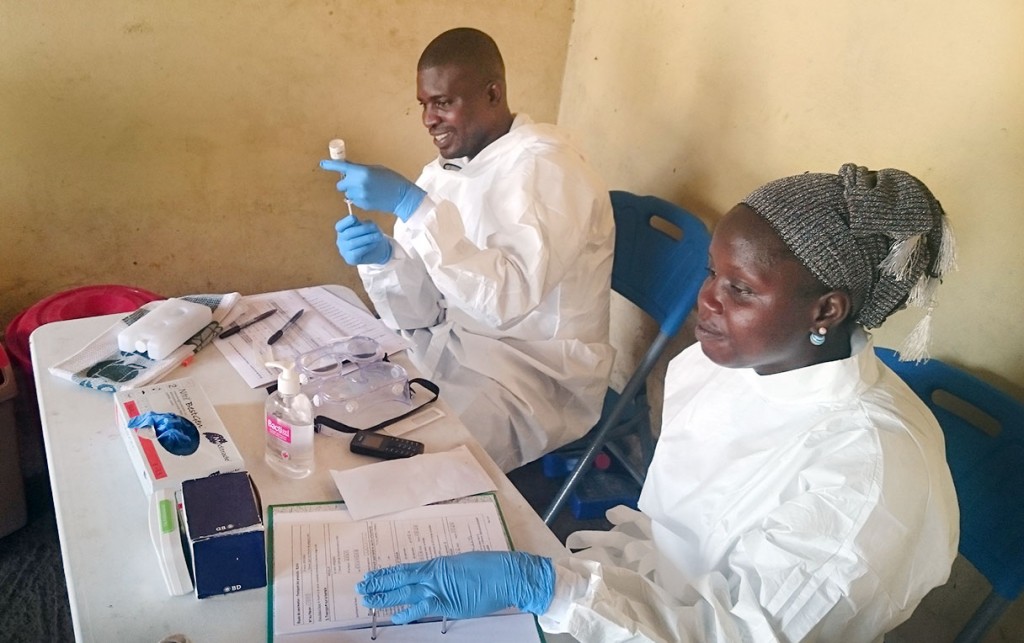 Wait – Why No Placebo in Guinea and Sierra Leone?

A classic experiment randomly gives some participants the treatment – in this case, a vaccine – and others an inactive placebo. “You’ll never really be able to completely prove that it works unless you compare getting it to not getting it,” says Dr. Anthony Fauci, Director of the National Institute for Allergy and Infectious Disease. “Even more importantly, if you examine the data periodically, you’ll be able to see that the vaccine might actually be doing more harm than good.”

However, in Guinea and Sierra Leone health officials decided that it wasn’t fair or ethical to ask people at high risk of infection to forgo a vaccine that might protect them. They say they’ll still get valuable answers by giving the vaccine to participants at different times.

Are There Important Differences Between the Vaccines?
Generally speaking, a live-virus vaccine like VSV-ZEBOV will tend to produce a stronger immune response, and will be more likely to induce side effects. However, until the studies are complete, we won’t know whether that’s true of the two Ebola vaccines.

One clear difference is that VSV-ZEBOV, like most live-virus vaccines, is easier to produce in large quantity. That probably makes it better suited for use in an emergency situation where vaccine stocks need to be produced rapidly.

What Do the Results Show So Far?

It’s too soon to draw conclusions, but an early analysis suggests that the vaccine does induce a good immune response, which in theory should protect people against Ebola. An early analysis from the PREVAIL trial, of the first 600 participants, found no significant dangerous side effects. The CDC and the the World Health Organization say the trials in Sierra Leone and Guinea have not detected any serious adverse events, either, although some participants have reported joint pain, mild fever and other flu-like symptoms.

Editor’s Note: NewLink Genetics is based in Ames, Iowa, and not Australia as originally stated. The PBS NewsHour regrets the error.

Left: A volunteer receives an Ebola vaccine in Sierra Leone. Thousands of these voluntary immunizations have been tested so far in the West African nation. Photo by Cameron Hickey.